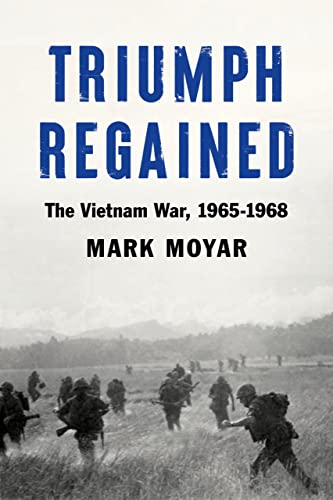 “According to military historian Mark Moyar, not only was the communist victory in Vietnam not inevitable, but by 1968 the war had shifted in America’s and South Vietnam’s favor.”

We are approaching the 50th anniversary of the Paris Peace Accords that purported to end the war in Vietnam. The official title of the document signed on January 27, 1973, was the “Agreement on Ending the War and Restoring Peace in Viet Nam.” In reality, as we now know, it was nothing more than a temporary armistice whose terms communist North Vietnam began to violate soon after the agreement was signed.

Two years later, the United States and South Vietnam lost the war after Congress cut off all aid to our longtime ally. According to military historian Mark Moyar, not only was the communist victory in Vietnam not inevitable, but by 1968 the war had shifted in America’s and South Vietnam’s favor. Moyar’s new book Triumph Regained: The Vietnam War, 1965–1968, details the fighting in Vietnam during the two-and-half year period after the Johnson administration introduced hundreds of thousands of U.S. troops into the conflict.

The reporting on the Tet Offensive in January 1968 is a perfect example of media misinformation. Tet was a military offensive launched by the North against cities and urban centers in South Vietnam, including the capital Saigon. Other than the capture of Hue—where North Vietnamese troops carried out unspeakable atrocities—the offensive was a disastrous failure. Yet American journalists—most prominently CBS’ Walter Cronkite—portrayed it as a communist victory and called for an end to the war.

Triumph Regained is Moyar’s second volume of a projected three-volume history of the war, which covers its military, diplomatic, and political aspects. The first volume titled Triumph Forsaken covered the years 1954 to 1965 and faulted the Kennedy administration for supporting the November 1963 coup that removed South Vietnamese leader Ngo Dinh Diem, for accepting Laotian neutrality, and for failing to interdict the Ho Chi Minh trail by which North Vietnam supplied its forces and allies in the South.

Triumph Regained, like Moyar’s first volume, is very much a revisionist history of the war. And it is based on U.S., North Vietnamese, and South Vietnamese sources that offer a different perspective on the war than that held by what Moyar calls the “‘orthodox school’ of Vietnam War history, which views America’s involvement in the war as wrongheaded and unjust.” Moyar writes that the war was a “worthy but improperly executed enterprise,” an effort consistent with America’s policy to contain the spread of international communism.

And Moyar shows that North Vietnam’s war effort would have been impossible without massive assistance from the Soviet Union and China, and that Ho Chi Minh and other North Vietnamese leaders, contrary to the orthodox histories, were more communist than nationalist, and were part of an effort to spread communist rule throughout Southeast Asia and beyond. Moyar writes that those historians who after the war ridiculed the “domino theory” ignore the fact that one of the most important dominoes in the region—Indonesia—was likely saved from communist rule by America’s war effort.

Moyar also details the infighting between U.S. military leaders and Defense Secretary Robert McNamara who repeatedly persuaded President Johnson to deny requests from the Joint Chiefs and others to use American air power against targets in Hanoi, Haiphong Harbor, and the Demilitarized Zone (DMZ), to increase efforts to interdict the Ho Chi Minh trail, and to attack North Vietnamese sanctuaries in Laos and Cambodia.

McNamara and other Johnson advisers worried that such actions could lead to a geographical “widening” of the war and might bring China and/or the Soviets into the war. And as the election year of 1968 dawned, domestic politics led Johnson, in the face of fierce opposition by the Joint Chiefs and U.S. military commanders in Vietnam, to impose bombing pauses designed to convince anti-war segments of America—including much of the elite media, which had by then mostly turned against the war—that he and the Democrats were the “peace” party.

In late October 1968, Johnson ordered a bombing pause and attempted to pressure South Vietnamese leaders to agree to talks with the North a few days before the presidential election in order to help Vice President Hubert Humphrey’s chances against his Republican opponent Richard Nixon. The “orthodox” histories claim that it was Nixon who pulled an “October surprise” by urging the South Vietnamese to resist Johnson’s pressure. But as Moyar points out, even the CIA’s Vietnam expert understood that the South’s leaders “had plenty of reasons . . . to believe that the White House’s diplomatic plan would imperil South Vietnam.” It was Johnson and the Democrats, not Nixon, who pulled an “October surprise.”

Nixon’s victory in 1968, and his landslide victory four years later against anti-war candidate George McGovern, evidenced the continued popular support for America’s effort to defend the independence of South Vietnam. As Moyar notes, public opinion polls confirmed this. But America’s liberal elite—the so-called “best and the brightest,” some of whom were responsible for getting us into the war—turned against the effort with righteous indignation once Nixon took office.

Moyar ends the book with Nixon’s victory in the 1968 election. U.S. military leaders sensed that the new administration would end or at least scale back the restrictions that had to date hampered the American war effort and led to unnecessary American casualties. But, alas, that story is for Moyar’s third volume.