The Trip to Echo Spring: On Writers and Drinking 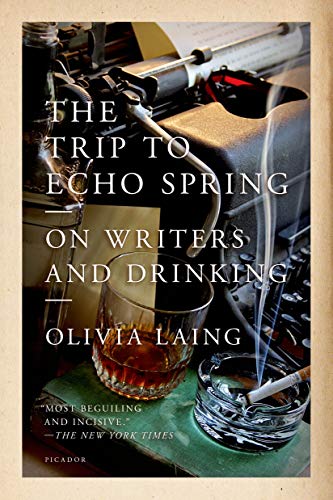 This is an engaging idea for a book engagingly written. In The Trip to Echo Springs: On Writers and Drinking Olivia Laing examines the connection between creativity, alcohol, and alcoholism in the lives of F. Scott Fitzgerald, Ernest Hemingway, Tennessee Williams, John Berryman, John Cheever, and Raymond Carver.

The title is derived from Tennessee Williams’ famous play Cat on a Hot Tin Roof in which one of the characters, directing himself to the liquor cabinet named for the brand of bourbon it contains, says “I’m taking a little short trip to Echo Spring.”

The book is multi-genred combining memoir, biography, travelogue, literary criticism, and some sobering information about the medical effects of alcoholism on mind and body.

Olivia Laing herself grew up in an alcoholic family and her journey—criss-crossing America on the tangled trails of her chosen alcoholics—is also a journey of personal discovery.

Skilfully weaving these many strands and genres she travels to some of the key towns and cities where her writers lived, wrote and drank, reflecting as she goes on their lives, work, views of and influences on each other. Incidentally as travel is such an important feature of this book and of these writers’ lives the rather skimpy map inserted after the Table of Contents could have been greatly improved upon. It would have been very interesting for the map to show where each writer lived and during what period of time.

Laing’s approach works best where there is a dense web of interaction between her subjects, particularly of course Hemingway and Fitzgerald with Tennessee Williams also in the mix. The book opens with a nice vignette of “two men in a car” (Cheever and Carver) arriving at a liquor store in search of “half a gallon of Scotch,” but otherwise the depictions of these two and of Berryman seem somewhat less vivid.

In explaining her odyssey and modus operandi Laing states that “there are some subjects one can’t address at home, and so at the beginning of the year I’d left England for America, a country almost entirely unknown to me. I wanted time to think, and what I wanted to think about was alcohol.”

The author’s own childhood was scarred by her parents’ divorce and by her mother’s then taking into the family a violent alcoholic woman whom she met on the Internet. Laing hints that no alcoholic women writers are included in her sample—though they exist in abundance—because that would be too close to her own situation.

She notes that there are many commonalities between these highly successful writers in addition to a penchant for alcohol. Among these are a weak father an overbearing mother, insecurity and a sense of inferiority, promiscuity, and death in middle age related to “hard and hectic” living. Many of the alcoholics including the subject of this book are also restless travelers.

Laing herself is an intrepid and amusing observer; attending an Alcoholics Anonymous meeting on New York’s Upper West Side she notes the memorable wall sign “No spitting. No eating food on shared computers.”

She decides to take a train from New York to New Orleans—to the bemusement of her American friends. The physical deprivation and incidental amusements of economy travel are precisely chronicled, and the state of insomnia induced prompts reflections on the effects of alcohol and sleep with F. Scott Fitzgerald and Hemingway providing rich material here.

Then she’s off again to Key West, Florida, with the contrasting childhoods of Cheever and Fitzgerald and Hemingway to mull upon, and the first serious appearance of Berryman whose father committed suicide in connection with the Florida land boom and bust.

Laing reflects that “there are so many currents of exchange, some benign some toxic, some exalted” between her chosen subjects; Berryman hearing of Hemingway’s death thinking of both their fathers and guessing “The poor son of a bitch blew his fucking head off;” Cheever still mulling over the event in his journals a decade later; Williams  who lived in Key West for almost four decades remembering his surprise on first meeting Hemingway to find him “a gentleman” not a “super-macho sort of guy.”

From Key West she follows a circuitous route with some lyrical prose to Illinois passing through St Paul with which both Berryman and Fitzgerald are associated.

It is a tribute to the author’s skill and the continuous excitement that she generates that these complex stories are still vivid and comprehensible.

Unexpectedly on page 270 her mother shows up “pink-cheeked and bundled up in a quilted jacket” and they continue by car to Port Angeles—where Raymond Carver spent much of his final decade. The book and the chapter end with Laing at Carver’s grave mulling the “mangled lives” of her heroes reflecting that “at the end of the day, though, the only thing to do is take hold of yourself, to gather up the broken parts. That’s when recovery begins. That’s when the second life—the good one—starts.”

This seems a surprisingly flat and trite ending for such a vivid writer though perhaps the last sentence it is self-referential, and she is uncomfortable talking about herself. While not expecting her to solve the problem of writers and alcohol, one could have anticipated a more thoughtful gathering together of the threads of her rich tapestry.

Let us hope also that she will take on women writers and alcohol next though given the different social attitudes toward women drinking, and possibly the different ways that women drink—perhaps more given to solitary indulgence—it seems unlikely that such a study would yield so many currents of exchange, benign or toxic.