The Trials of Zion 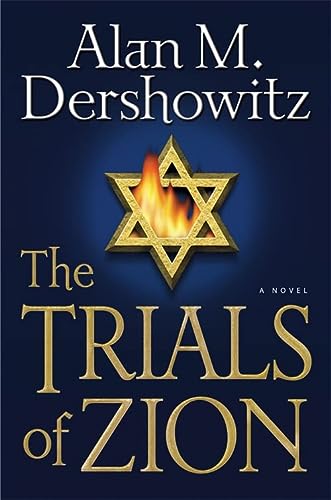 The Trials of Zion challenges the imagination of the most avid aficionado of courtroom drama and intrigue, as Alan Dershowitz expertly intertwines contemporary views of Middle Eastern tradition and history.

The characters and settings come alive in Jerusalem, as international heads of state gather to announce a new Israeli-Palestinian peace accord, just as vividly as they do in Cambridge, Massachusetts, when 26-year-old Emma Ringel, recent Yale Law graduate and her father, legendary defense attorney and part-time Harvard Law teacher, Abe Ringel butt heads over Emma’s pending job prospects. Each of them reacts from a different generational viewpoint to the horrendous explosion that has set Mid-East relations into an unrelenting tailspin threatening nuclear war.

Shimshon Regel, Abe’s cousin, opens his West Jerusalem home to Emma and tries to educate her through his many stories to the family’s long history in the area, including historical reasons causing the current ongoing strife throughout the region. Shimshon’s vast knowledge cannot allay his prejudicial fears as Emma walks across the border into East Jerusalem to work and socialize with her Palestinian friend from Yale turned human rights lawyer, Habash Ein, who skillfully represents either side in the courtroom. Shimshon’s warning of the dangers of racial turmoil, in mixed personal relationships, fails to quell Emma’s passion for reinforcing her bond with Habash Ein.

All too soon, circumstances surrounding Habash and Emma’s defense of the Palestinian self-proclaimed bomber draw the young Jewish-American woman’s father from Cambridge to join the defense team in East Jerusalem, where he discovers that he must win the case or risk losing his daughter forever. In The Trials of Zion, one can feel the tension that emanates from the greatest of courtroom dramas mix with actions found only in the high-action thrillers of the best writers. The artistry with which the author paints the view of this bitterly contested land, today and in yesteryear, leaves the reader with a sense of having been on a long journey through history. The stories so deftly related by Shimshon to Emma serve to fill in the historical blanks for the reader without interrupting the fast action of the story.

There were one or two minor stumbles in The Trials of Zion for this reviewer, unfamiliar with the Middle Eastern lore that lingers behind the headlines. The early chapters contain a great many Jewish and Palestinian names and terms so that some rereading became necessary until the author skillfully worked them into the story to pacify the most uninitiated reader. A brief moment of disappointment crept in when the ending became visible a bit too soon, but rapidly dissipated as each favorite character moved on toward a satisfying future. An excellent read!

Alan Dershowitz has been involved in some of the most notorious court cases of the past three decades including the O. J. Simpson trial, Muhammad Ali’s appeal, and Bill Clinton’s impeachment trial. He resides in Cambridge and is a professor at Harvard Law School. Books by Dershowitz include Chutzpah, The Advocates Devil, America on Trial, and The Genesis of Justices, among others.