The Trials of Nina McCall: Sex, Surveillance, and the Decades-Long Government Plan to Imprison "Promiscuous" Women 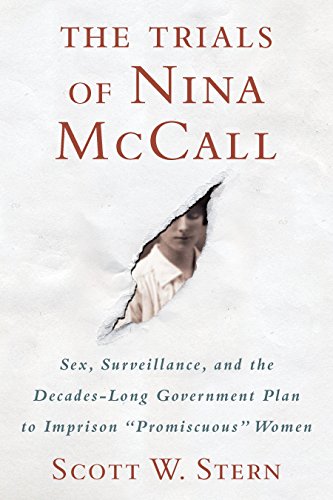 “Stern offers an invaluable historical analysis of a nation’s moral order in crisis, one that Americans need to bear in mind as Trump’s war on those seeking asylum in the U.S. plays out.”

The Trials of Nina McCall is the story of one of the most shameful episodes in the nation’s history, the “American Plan”—and you’ve probably never heard of it. For nearly a half a century, from 1910 through the post-WWII era, tens of thousands of women were seized, forced to undergo an invasive (and very imprecise) medical examination, then—if found to have a “sexually transmitted infection” (STI)—were tried and imprisoned in a detention center and forced to undergo medical treatment. McCall was one of the victims of the American Plan.

Stern uses a compelling way to tell his exhaustively researched story. He anchors his book in a painstakingly rigorous account of the life—and sufferings—of McCall (1900–1957), a woman long lost to history. Set against her biographic portrait, Stern provides detailed accounts of how the war on STIs played out in McCall’s home state of Michigan as well as across the country and in U.S. territories. This is the saga of a merciless—yet well-coordinated—campaign to cleanse the nation’s women (and some men) of gonorrhea, syphilis, and other STIs.

The author takes the reader back a century to the second culture wars when a very different America existed. (The first culture wars took place in the 1840s in opposition to the utopian and free-love communities; today’s third culture wars began in the 1970s.) Between 1890 and 1920, America was transformed. The population nearly doubled, jumping to 106 million from 62 million, reshaping the nation’s demographic character. Some 23 million European immigrants, many of them Catholics and Jews, joined two million migrating southern African Americans and whites to recast the cities of the North and West.

In the years before U.S. entry into World War I, Christian conservatives and others undertook a campaign against what they considered dangerous “vices,” particularly commercial sex and alcohol consumption. The alleged sexual exploits of prostitutes and “promiscuous” women were identified as the primary cause of the spread of STIs. It was seen by many of the nation’s elite (notably John D. Rockefeller Jr. who bankrolled the program for decades) and anti-sex enforcement operatives (like Eliot Ness made famous for his war against Al Capone) as a symptom of the nation’s deepening moral failure.

Opposition to sexual wage labor brought together traditionalists and progressives in a common cause. Their success is reflected in the passage of the 1910 Mann Act outlawing interstate sex commerce, the closing of “red-light districts” prior to World War I, and the passage of the Chamberlain-Kahn Act following the U.S.’s entry into the war.

One of the religious right’s first targets was the so-called red light districts. (The term “red light” is apparently derived from the early days of prostitution in Kansas City when a railroad brakeman posted a red light outside a whorehouse while he was engaged inside.)

These districts were locally-regulated zones of illicit activities, including prostitution, gambling, and liquor sales. They operated throughout the country, but the most notorious ones were New Orleans’s Storyville, San Francisco’s Barbary Coast, Denver’s Market Street, Baltimore’s Block, Chicago’s Levee, and New York’s Bowery, Five Points and Tenderloin. Conservative zeal led to the closing of approximately 125 districts.

Together, these initiatives restructured commercial “vice,” whether sex, drinking, gambling, or drugs, forced it into more underground settings and under the control of organized crime (and corrupt law enforcement).

In 1918, McCall was 18 years old when a local health officer in her hometown of St. Louis, MI, ordered her to be examined for a STI. She was singled out because a health official suspected she was a prostitute, carrying an STI or considered “promiscuous.” She was—falsely—diagnosed having gonorrhea. To no avail, she insisted she was not infected but was coerced into going to a regional “detention hospital” for three months of supposed treatment. There she underwent prison-like supervision, disciplined work (e.g., cooking, cleaning), regular medical inspection, and forced treatment consisting of painful mercury injections.

The nation’s entry into the Great War permitted local authorities to suspend habeas corpus, effectively denying Fourth Amendment protections against illegal search and seizure. Unescorted and single women were seized in periodic roundups, often on city streets, in public parks, or outside soldiers' camps for simply walking down the street on suspicion of being a prostitute or promiscuous.

Some were indeed prostitutes, while others simply teenage girls attracted to the glamor of soldiers going off to war or "charity girls" who had sex in exchange for meals or entertainment. At this historical moment, neither a scientifically valid diagnosis nor a medically approved treatment for STIs was available.

The War Department established a quarantine policy and local authorities like those in McCall’s home town implemented it; it was a nationwide witch hunt. The women and girls seized were designated “domestic enemies,” accused of undermining the war effort. Those seized were presumed guilty and, if found infected, were often given indeterminate sentences.

A disproportionate number of those arrested were women of color and working-class women like McCall; black women were often kept segregated from white women, jailed in inferior facilities, and subjected to racist attacks and sexual assaults. Stern repeatedly acknowledges how incarcerated women protested their painful and often illegal imprisonment through hunger strikes, violent riots (including setting fire to their facility) and successful escapes.

Forced sterilization was one of plan’s worst outcomes. Drawing on the findings of the “science” of eugenics, moralists argued that human evolution culminated in the Anglo-Saxon “race.” They believed that all other races lacked the spiritual, mental, and physical capabilities of the white man. This belief was shared by the “leading” people of the day, including Rockefeller and Margaret Sanger, as well as many politicians, industrialists, ministers, college professors, scientists, and opinion leaders. The first legal state-sanctioned sterilization took place in Indiana in 1907 and approximately 60,000 people were sterilized as biologically inferior humans, including those identified as feeble-minded, promiscuous women, and homosexuals as well as convicted rapists or criminals.

In 1921, three years after her interment, McCall, supported by three prominent Michigan attorneys, took her case against those who had wronged her to court. A judge initially ruled against her, but her appeal to the Michigan Supreme Court was successful. The court decided that the doctor who examined her had erred in his treatment of her, because he had no reasonable grounds for suspicion that she had been infected; it warned, that if he had such grounds, his actions would have been perfectly acceptable.

Stern follows the American Plan’s war against STIs and women after WWI, through the decades of the Roaring ’20s, the Great Depression, WWII, and how it petered out during the 1950s. Most revealing, she draws attention to the “complicity” of popular liberals in promoting the plan, including Earl Warren, Edward “Pat” Brown, Fiorello La Guardia, Franklin Roosevelt, and Eleanor Roosevelt as well as The Nation, the ACLU, and the American Bar Association.

Stern has done is homework, surely the scholarship of the PhD dissertation. His focus is on the American Plan, and he does not offer a larger theoretical consideration of the second culture wars that helped fuel the plan’s adoption and implementation. Sadly, little or merely passing attention is paid to Prohibition or women gaining the vote as well as the African American great migration, the rise of the second Ku Klux Klan, the Tuskegee syphilis study, the Scopes “monkey trial,” and the Japanese internment camps during WWII.

Like all good scholarly studies, The Trials of Nina McCall’s strengths far outweigh its limited weaknesses. Stern offers an invaluable historical analysis of a nation’s moral order in crisis, one that Americans need to bear in mind as Trump’s war on those seeking asylum in the U.S. plays out.