The Trials of Harry S. Truman: The Extraordinary Presidency of an Ordinary Man, 1945–1953 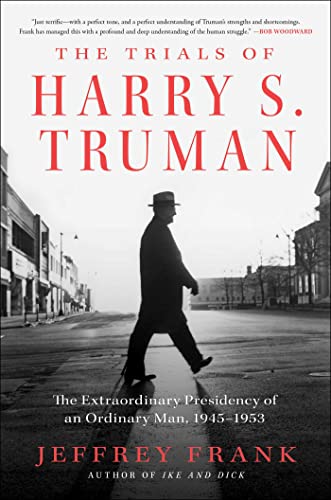 “Jeffrey Frank recounts Truman’s policy triumphs—ending the Second World War in the Far East, launching the Truman Doctrine (aid to Greece and Turkey) and the Marshall Plan, presiding over the Berlin Airlift that kept West Berlin’s citizens fed and supplied during the Soviet blockade, and forming NATO to contain Soviet aggression in Europe.”

Harry Truman had a very consequential presidency. He was an accidental president—chosen by Democratic Party insiders as Franklin Roosevelt’s running mate in 1944 because then-Vice President Henry Wallace was considered too naive and too pro-Soviet to tackle the challenges of the postwar world that the dying president’s successor would face. When Truman became president after FDR’s death in April 1945, the Second World War was winding down and the new president faced tough decisions everywhere he looked.

Jeffrey Frank, formerly of the Washington Post and the New Yorker, has written a very conventional book about Truman’s presidency. It is not quite the hagiographic work of David McCullough’s Truman but also does not measure up to Alonzo Hamby’s more discerning Man of the People.

Frank calls Truman “a complicated man concealed behind a mask of down-home forthrightness and folksy language.” Truman, he writes, was “steadfast, sometimes courageous, and deeply in love with his country and its Constitution” and his policies “brought stability to an unsteady world.”

That description and estimate of Truman is only partly accurate. He was also the product of a corrupt political machine (headed by the notorious Tom Pendergast); a son of the South who desegregated the armed forces but shared the prejudices of his place and time; a straightforward talker who, as Frank notes, frequently embellished or outright lied about events large and small; a president who implemented policies that contained communism in Europe but failed miserably to do so in Asia; and a leader whose love of the Constitution didn’t prevent him from waging war in Korea without congressional authorization and seizing private businesses without lawful authority.

Jeffrey Frank recounts Truman’s policy triumphs—ending the Second World War in the Far East, launching the Truman Doctrine (aid to Greece and Turkey) and the Marshall Plan, presiding over the Berlin Airlift that kept West Berlin’s citizens fed and supplied during the Soviet blockade, and forming NATO to contain Soviet aggression in Europe. Frank applauds, as conventional liberals do, Truman’s domestic “Fair Deal” proposals even though he mostly failed to get them passed by Congress.

When it comes to Truman’s Asia policies, however, there is a huge gap in Frank’s history—American policy toward postwar China is dealt with only tangentially. The policies that helped “lose” China to the communists and which resulted in the formation of the Sino-Soviet bloc and subsequent outbreak of the Korean War are mostly missing from this book.

To be sure, Frank writes much about the Korean War—and most of it favorable to Truman and unfavorable to General Douglas MacArthur. Frank accepts the conventional view of “Truman good, MacArthur bad,” despite recent revisionist history by Arthur Herman and others that calls into question that judgment.

And there is barely a mention of Truman’s careless neglect of domestic security concerns which, like his predecessor’s approach, enabled communists to infiltrate the US government as spies and agents of influence. Instead, Frank criticizes Truman for needlessly contributing to the “red scare” by authorizing loyalty programs for federal employees.

Truman was fortunate to be surrounded by men of great caliber: George Marshall, Robert Lovett, George Kennan, James Forrestal, Dean Acheson, and others. They were far from flawless, but they understood the way the world works and helped Truman achieve his policy triumphs. But they also shared in his failures.

Surprisingly, Frank has some harsh judgments of Truman confidant Clark Clifford, who often received and accepted credit for others’ accomplishments. Clifford later became famous as a Washington-insider-lawyer who memorably characterized Ronald Reagan as an “amiable dunce,” an historical judgment that Reagan’s accomplishments eviscerated.

Frank ends the book with the bitter end of Truman’s presidency—an “unwinnable” war in Korea, a failed domestic program, revelations of communists within the government, a rebuke by the Supreme Court in the “steel seizure” case, and the emergence of lasting enmity between Truman and his successor Dwight Eisenhower. He left office a very unpopular president.

But historians eventually changed their view of Truman’s presidency. It was once common to hear the saying “To err is Truman,” but now he is usually ranked as a “near great” president. Frank would certainly place him in that category. But sometimes history can be unkind. The consequences of Truman’s failed Asia policies are today’s front-page news as communist China threatens Taiwan and bids to replace the United States as the world’s leading power. But you won’t find any reference to that in Frank’s book.