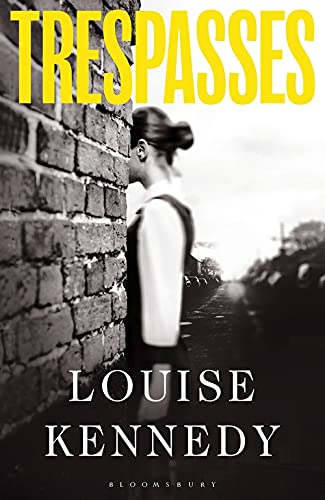 “Its message of love’s power—the passion that ignites every day no matter our circumstances—to outlast war is captivating.”

In the time of The Troubles in Northern Ireland, no one is innocent.

Cushla perhaps least of all. Cushla spends her days teaching and her evenings tending bar. She’s only 24, but she’s already responsible for her alcoholic mother’s welfare. She meets a lawyer named Michael who defends IRA members by day, cares for his ailing wife in the evening, and drowns his sorrows at her family’s pub at night. Michael is older, Protestant, and married, and Cushla falls for him, setting up a web of secrets and divided loyalties, hurling toward a chain reaction that can’t be stopped.

It's challenging enough to try to work two jobs, trying to care for a judgmental mother going downhill. Add to that mix a forbidden affair, and these challenges seem daunting, even insurmountable. Yet Trespasses by Louise Kennedy takes place in 1970s Northern Ireland, in the middle of its "Troubles," code for civil, religious war.

For those who don't remember The Troubles or the Irish Republican Army (IRA), the conflict started because, as a rule, Protestants wanted Northern Ireland to remain part of the United Kingdom, and Catholics wanted it to become part of the republic of Ireland, to the South. According to Britainicca.com, some 3,600 people were killed and more than 30,000 wounded before a peaceful solution was reached in 1998, 30 years after the street fighting, bombings, sniper attacks, roadblocks, violence, and threats of violence began. Of course, it was more complicated than that. All conflict is.

The reader can surmise that Cushla falls for the attorney Michael as an escape, but it rapidly escalates on both sides, even through their differences of age, religious affiliation, and class. They have a common need to leave behind their caretaking for so many, if only for a few hours. Cushla is looking for a semblance of validation and security, but when she throws caution to the wind, she gets the exact opposite.

Her actions catalyze a series of tragic events in motion, punctuated and exacerbated by wartime. One wonders what would have happened without a war, but Cushla gets no such closure with Michael, though she gets a brief moment of forgiveness from the youngest son in the family that she both cares for and unknowingly destroys. Her actions, both kind and impulsive, crush his family, which is already on the brink after a brutal physical attack on their patriarch and bread winner.

Kennedy obviously writes of a place and era she knew well, and she has the objectivity of a journalist who can see the past with objectivity and nuance. Her sentences are rhythmic and evocative, the tension both visceral and well-paced. All set amid each day's foreboding headlines that calmly announce a bomb, a murder, or an arrest alongside an invitation to a school event. One small warning if you’re not from the U.K.: Even if you've had many Irish friends, get used to the Irish dialect. There are times you might lose track of who is speaking because of the lack of quotation marks, also a British style of grammar. Even so, the author’s sentences are full of the grit of real life, and the lyricism of a young Irish woman in love.

The big question for someone looking for love is if the other person loves them. Is a love born out of conflict, melancholy, and isolation, real? The novel’s end seems to say it is, that actions speak louder than words, both in love and in hatred. That intention outweighs results. Yet who is culpable for what happens in the novel? It seems everyone is, to some degree. All except for the youngest and most innocent.

Every action Cushla takes, good or bad, has consequences when the puzzle pieces of her life smash together and shatter in a brutal but well-foreshadowed ending that is fully predictable in this time of near constant strife. What isn’t predictable: Ironically, the misbegotten love toward Cushla from another young man, not Michael, catalyzes the culmination of events.

Even though the reader might foresee the ending, it still devastates in its magnitude, because this is a story about ordinary people living ordinary lives in extraordinary times. Then, in Northern Ireland. Now, in another country. Tomorrow, somewhere else. Its message of love’s power—the passion that ignites every day no matter our circumstances—to outlast war is captivating. The love that lives on after The Troubles, portrayed by an adult Davy’s unconditional forgiveness--does seem to say that it’s right to act on love, that in the end it’s worth it, to live a life of real, authentic love when everything else is falling apart, where every loyalty is questioned. It's the one real thing we have left.