The Treeline: The Last Forest and the Future of Life on Earth 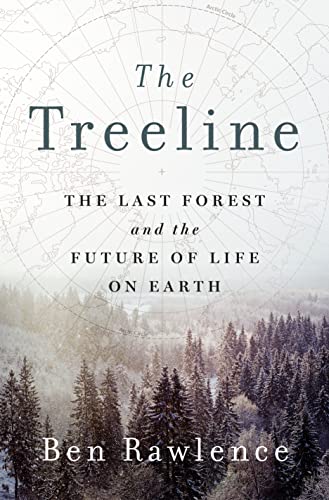 The far north’s frozen certainties are melting to chaos in a warming world. The Arctic treeline—a too literal phrase for the farthest north trees can grow given temperature and other environmental conditions—has wobbled in the past but is now shifting northward from climate change. Ben Rawlence’s The Treeline: The Last Forest and the Future of Life on Earth details how snow, ice, and most dangerously permafrost are giving way to forests of Downy birch, white spruce, black spruce, and other species.

This northward migration is no climate change panacea. “As trees invade frozen tundra,” explains Rawlence, “they hasten the melting of permafrost, frozen soils that contain enough greenhouse gases to accelerate global warming beyond anything scientists have modeled.”

Adding to the chaos confronting scientists and indigenous communities, and indeed all of us, are the die-offs of tree species well evolved to thrive in the cold, but not in this new north of rising temperatures and wildfires.

These potentially cataclysmic changes are happening in the world’s boreal forests, which Rawlence describes as “the lungs of the world,” covering one-fifth of the globe and containing one-third of the world’s trees. Only the oceans are a larger biome.

A tight weave of science writing and travel writing, The Treeline is Rawlence’s journey through a beautiful but rapidly unraveling tapestry of forests, wildlife, and human cultures. This international challenge, though, is most painfully experienced on a local level.

In Scotland, restoring the Scots pine requires massive culling of deer for forests to re-establish up to the “natural treeline.” But what is that in a warming world? In Norway, the warmer and shorter winters that foster Downy birch are also taking away the snow that once sheltered grasses that feed migratory reindeer herds. As reindeer starve, the Sami people who rely on them face their own cultural collapse. In Siberia, the former Soviet Union’s ruthless and systematic destruction of indigenous cultures for colonization and resource extraction has left a landscape where the treeline, including the Dahurian larch, is alternately not moving, or burning up from wildfires, or giving way to flora less efficient at carbon storage, with melting permafrost perhaps the only constant.

Crossing the Bering Sea to Alaska, Rawlence finds spruce browning and dying in some areas, while in others the tundra is turning green from newly arriving spruce, shrub, and beavers, all of which is creating new landscapes, upending the food chain, and turning salmon into refugees from rivers that are now too warm for spawning.

In Canada, by contrast, indigenous communities were able to have 30,000 kilometers of traditional territory designed a World Heritage Site for environmental and cultural preservation. Even there, though, the balsam poplar and the human communities living among it are not protected from climate-caused upheavals.

Greenland, which may one day live up to its name, offers bittersweet hope. As the glaciers melt, scientists, locals, and tourists are planting poplar and other trees in newly opened habitat with an eye toward creating a botanical refugia.

Rawlence identifies colonialization and the commodification of nature as the philosophic drivers behind these dangerous changes. Many of the The Treeline’s journeys are taken amid the Sámi, the Anishinaabe, the Koyukon, and other indigenous communities. Rawlence expertly conveys that humanity is losing not just the north but a way of seeing the forests and its trees, mammals, birds, even its rocks and rivers as alive, sacred, and deserving of our humble stewardship.

The Treeline’s scope is as exhaustive as it is exhausting to read. A partial list of topics includes the otherworldly Siberian landscapes in winter (arguably the book’s most engaging chapter), the homing instincts of beluga whales, how trees support the creation of plankton that form the basis of the oceans’ food chains, how the antibacterial and antiseptic properties of trees clean the air, how forests help make wind and rain, and much more. The book assumes a readership with scientific understanding and would have benefitted from a glossary.

Rawlence writes exquisitely of the landscapes he visits and with respect and compassion for the people living there. But the narrator himself is an enigma, as is why he’s set out on this dangerous, awe-inspiring journey. He writes, too, in the long-standing tradition of nature writers who describe complex ecosystems and beautiful landscapes thrown out of watch by human greed and insensitivity, but who have disregard for albeit imperfect repairs.

Scotland’s “admirable 200-year vision” of forest restoration has been successful, but perhaps too little, too late in the face of ongoing warming. Those who are fighting to retain the Sámi’s traditional lifestyles are “either the herding aristocracy (who are) so rich in animals that they can weather the storm for the moment . . . or else the true devotees: possibly addicts, possibly mad.”  The Russian Pleistocene Park, which is replacing forests with tundra-steppe where snow is stamped down by migratory herbivores is keeping the soil colder than in the forests but replacing forest with grass “is such a counter-intuitive solution to global warming it is unlikely to take hold in a world trying to arrest deforestation and plant more trees.”

Rawlence’s solution, to the extent he offers one, is to accept that it’s too late to stop global warming (although limiting the impact might still be possible) and to reconnect with nature: “Curiosity and noticing are the humble but radical prerequisites for a new relationship with the earth. Systems change when there is a culture that demands it. The revolution begins with a walk in the woods.” Unarguably so, but it never ends there.

As Rawlence rightly says, “It has always been the case that life is a moral endeavor, the very act of living a legacy.” The Treeline’s concluding chapter reminds readers that humans have always been a keystone species, our presence sending ripples through the ecosystem for ill or good.

“We have the power to choose at least some of what survives,” Rawlence writes, yet it’s not likely that his relentless detailing of a disaster in the making will inspire hope, if hope is understood as realistic, long-term actions toward a new result.

And that makes The Treeline a well-written, informative, sometimes fascinating, yet difficult book to unreservedly recommend. While a resource for a naturalist or activist, it’s easy to imagine a reader new to these issues left with only overwhelming loss over an unavoidable fate. Which is unfortunate, because as Rawlence understands, “What you have yet to do will always define you more than what you have done in the past.”