Miss Treadway and the Field of Stars: A Novel 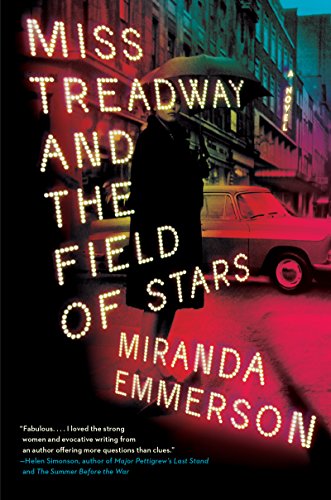 And it’s into this heady environment we’re plunged in Miranda Emmerson’s accomplished novel Miss Treadway and the Field of Stars.

Perfectly cadenced for the time and place, this mystery-cum-recent history cleverly captures the truth, as well as the essence, of mid-sixties London. So bold, so free . . . yet scrape the surface and that freedom scrubs off almost as easily as the girls’ gaudy makeup.

For working-class, serious-minded Anna Treadway, as for so many young hopefuls, London is the center of the universe, a place to shrug off the crushing limitations of background and secrets . . .

“Anna Treadway lived on Neal Street in a tiny two-bed flat above a Turkish café. She went to bed each night smelling cumin, lamb and lemons, listening to the jazz refrain from Ottmar’s radio below. She woke to the rumble and cry of the marketmen surging below her window and to the sharp, pungent smell of vegetables beginning to decay.

“When she went to buy fruit at seven o’clock it took her past the Punjab India restaurant. Past the emerald green face of Ellen Keeley the barrow maker. Past the dirty oxblood tiles of the tube station where Neal Street ended and James Street began. Past Floral Street where the market boys drank their wages away and down, down, down to the Garden. Covent Garden: once the convent garden. Now so full of sin and earth and humanity. Still a garden really, after all these years.”

Dresser to glamorous American actress Iolanthe Green, one of the brightest stars in the city’s sparkly firmament, Anna is far more serious-minded than most other new Londoners—a Jane Austen in a Helen Gurley Brown world. Despite a genuine fondness for her celebrity charge, the bookish young woman cares mostly about bettering herself: “work and study, books and words,” as one acquaintance comments. She may be single in the city but the only bright lights that appeal to Anna are those in the theatre where she works.

As for men, they don’t figure anywhere in her plans. They’re merely obstacles to her progress, “the murderers of time and intellect.”

Those carefully laid plans seem to be working out, too, until one November evening when Lanny, as Anna calls Iolanthe, bids her a good night and walks off into the cold winter air.

See you Monday, Anna calls back.

Except she doesn’t see Lanny on Monday. Nobody does

At first, it’s thought the actress has been taken ill. But no. She hasn’t been seen at the Savoy Hotel, her swanky home from home, for days. No one matching her description has been admitted to any of the major hospitals, either.

By Tuesday, the newspapers are all afroth with the mystery of the missing star. Have the notorious Moors murderers inspired a copycat killing in London? asks one. Perhaps she’s fallen prey to a gang of people smugglers in the city’s sleazy Soho, suggests another, while one popular daily asks readers to join in the hunt for the glamorous American performer.

By Thursday, The Times newspaper wants to know why women aren’t safe to walk the streets of Theatreland, while The Guardian asks why so much attention is being paid to one wealthy actress when in the past week alone seventy ordinary people have gone missing “without any great fanfare at all.”

The police inspector in charge of the case would probably have agreed with the newspaper. With more than enough crime on his plate, including a potential scandal involving senior government officials following the discovery of a dead male prostitute, the last thing he needs is to worry about a feckless actress. Be that as it may, most of his men have been assigned to the hunt for Iolanthe Green.

“The worst of it is I still have to pretend to care . . . when any fool can see that the woman’s obviously done herself in and hasn’t had the decency to leave her body somewhere handy,” he tells Detective Sergeant Barnaby Hayes, charging him to close the case, and fast. It’s a task much easier said than done, for while the theatrical toast of the town lives her life in the spotlight, not much about her is as it seems.

As the detective later tells Anna: “The thing about truth, Miss Treadway, is that it’s not always the friend of narrative.”

As the days drag on and the almost nonexistent trail grows as cold as the English winter’s bite, Anna steps up her own search, only to uncover a seedier, seamier side to her missing friend’s tangled story.

Accompanied by accountant Aloysius, an ardent Anglophile whose biggest shock in life so far is that his degree from the University of the West Indies won’t gain him entry to exclusive gentlemen’s clubs or the city’s best restaurants, Anna vows to get to the truth.

The pair, joined at points along the way by assorted other misfits, soon find themselves immersed in a troubling world of music dives, backstreet abortionists, and police brutality.

Emmerson’s superb storytelling notwithstanding, it’s depressing to realize that the gender, racial and religious mid-sixties prejudices her mystery exposes—all those 20th century evils we thought we’d just about overcome—are being forcefully thrust to the fore once more.