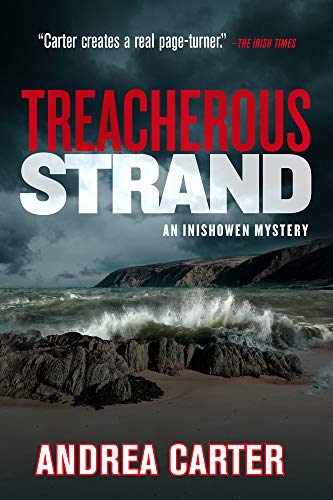 For a small town on the northern tip of Ireland, there are an awful lot of suspects for multiple types of crime. They weave together into a puzzling whodunit—at the center of which is Benedicta (“Ben”) O’Keefe, a solicitor who moved to the Inishowen Peninsula to escape her own past.

Ben’s law practice exposes her to many people’s troubles, all of which run deeper than she can know without either pushing too hard or violating confidentiality. Her own troubles in this book (volume 2 of the Inishowen series) escalate fast when a new client approaches her to make a will then turns up dead the next day as a suspected suicide.

Ben knows enough to doubt the suicide and fear her client was murdered, but the case is closed for lack of supporting evidence. Unwilling to let this injustice slide—especially when it appears to be linked to other deaths—she becomes the victim’s champion. How she goes about her quest, however, will likely cleave the book’s readership into two camps.

It depends on how readers relate to amateur sleuths. In reality it’s hard for someone outside law enforcement to have reason and means to investigate a crime. So authors must be creative to provide access for their civilian characters. But they also have to be careful about making that access plausible, and/or giving their sleuths a compelling reason to snoop (and get away with it).

Ben’s compulsion is guilt. In the past, she failed to act in a way that might have prevented her sister’s death. She is still punishing herself for it when she makes the same mistake with her new client.

Emotionally, therefore, we can understand some of Ben’s impulses (and heavy drinking). Intellectually, however, her self-justifications don’t carry convincing weight.

“I realized I was doing exactly what Maeve had warned me not to do: I was trying to play detective. But Molloy had left me no choice. If he had kept the investigation open, I would have no need to interfere.”

Um—wait a minute. “No choice”? There’s one choice she doesn’t pause to consider, like accepting the situation and living with it, keeping her civilian nose out of police business.

It happens that the police are wrong, and Ben’s rejection of their action is morally correct. She’s not the first amateur sleuth to undertake the mission of clearing someone’s name or finding their killer when the people who should be doing it won’t, don’t, or can’t.

What might set certain readers’ teeth on edge is how she blames someone else for her own action. She makes a similar logic leap a hundred pages later: “Suddenly I knew with absolute clarity that it was up to me to try and fix that.”

Um—no it’s not. No one asks her to take responsibility for an obligation she alone perceives. The unfairness and pathos she’s perceiving are inarguable; the counterpoint is, she’s filling shoes that don’t belong to her, and is trying to fix something from the past without having enough information to accurately gauge the consequences of her actions.

After another 50 pages she finally catches on to what’s been obvious since the first chapter: “I hadn’t wanted to acknowledge it, or face it, but I knew that my quest to find out what had happened to Marguerite was a way of seeking some kind of redemption. Redemption for how I had treated Marguerite certainly, but also for the way that I had failed my own sister.”

Okay, fine—this shows a character development arc: unawareness to enlightenment through experience. She gets there by making one risky choice after another while knowing each time that she’s being unwise but doing it anyway. No surprise that she keeps getting into trouble, and inciting the bad people to get her out of the way.

While she finds and connects complex clues to the crimes from nosing into other people’s relationships, she doesn’t see, or appropriately respond to, clues that signal threat to herself. Instead she blunders on, consistently self-absorbed and judgmental, allowing her obsession to harm friendships, romance, and career.

This personality trait is what will gain or lose reader sympathy. Those with prudent natures will cringe and sigh as she repeatedly sets herself up for a fall and assigns her own emotions to other people. Readers with more daring and passionate natures, who believe some things are so important that they are worth pursuing at all cost, will cheer Ben for her moral and physical courage.

Ultimately her gambles pay off in solving the crime(s), after twice nearly becoming the next victim. And perhaps not predictable but tiresomely common in murder mysteries, the perpetrators pause for full confession on the brink of doing her in.

All that aside, the book is well written, and readers outside Ireland will learn something about that country, especially the region highlighted by the title. The story launches with a grabber opening line: “Panic is a hangover cure.” Those five words set the tone for all that follows.