Traveling Black: A Story of Race and Resistance 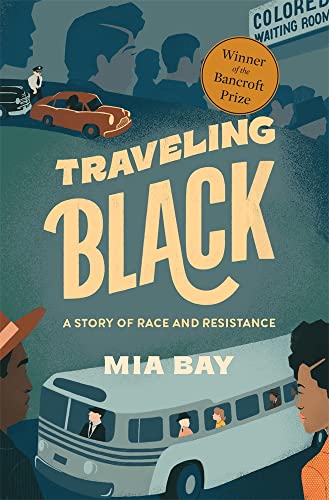 “Filled with vivid first-person accounts, Traveling Black is a superb history that captures a shameful aspect of the American story.”

Before the advent of automobiles, Jim Crow railroad cars could not be avoided. Widely loathed by traveling Black Americans, they were the oldest, dirtiest wooden cars available, often also served white smokers and as a baggage car, and generally “collapsed like an accordion” in train crashes.

“The colored car is always placed ahead [next to the engine] so that in the case of a head on collision “the ‘Negroes’ will get killed first,” observed Black writer J. A. Rogers in 1926. In the same period, train travel became safer and more comfortable for whites.

Why bother recounting the “dangerous and degrading” conditions African Americans faced in evolving forms of travel since the pre-Civil War era? For University of Pennsylvania historian Bay, author of this important and disturbing book of historical reclamation, the need is apparent.

Many of us, young Blacks included, have forgotten the tribulations of travel segregation. Incidents have not been carefully documented by historians. Apart from an occasional old photo of a “For Colored Only” waiting room sign, there is little to remind us of this once ever-present type of segregation, a “formative part of life” for all Blacks.

Bay’s engrossing account reaches back to the days when white northerners required African Americans to ride on the roofs of stagecoaches and on the outside decks of steamboats. She offers harrowing stories of disgusting treatment that kept Black travelers constantly unsure of where they were welcome, guided by a “complex pastiche” of law and custom that created “racial rules too inconsistent to be easily followed.”

Over time, local customs and laws varied greatly, and Bay has captured nicely the nuances of travel across regions. She makes clear how segregated transportation worked and how important its eradication (with passage of federal legislation) has been to the freedom of Blacks.

“As new modes of transportation and accommodations developed, new forms of segregation followed,” she writes. Bay tells the story against the background of both Black opposition to travel segregation and the evolving civil rights movement.

Even the automobile did not offer an escape from segregation. As car owners and drivers, Blacks still had to contend with “racial right of way,” discrimination by insurance companies, and “whites only” gas stations. In 1937, entertainer Cab Calloway’s sister was arrested for trying to use a restroom at a Shell station in Yazoo City, MS.

Few roadside motels served Black travelers before World War II, writes Bay. Most Black drivers made long car trips without stopping, bringing plenty of food with them. They relieved themselves in roadside ditches.

Plane travel offered segregated seating and a chance for Blacks to be “bumped” from flights when space was needed. Agents told Black-sounding callers flights were full. Planes—like other modes of transport—often saw daily fights between Black and white passengers during World War II, when many Black soldiers and civilians were traveling.

After much litigation and passage of the Civil Rights Act of 1964, things improved across the travel spectrum. Common carriers and public accommodations were desegregated, but discrimination was “never purely a matter of law,” says Bay. Since the 1970s, racial profiling on highways has “escalated sharply.”

Filled with vivid first-person accounts, Traveling Black is a superb history that captures a shameful aspect of the American story.