Trapped in Mediocrity: Why Our Schools Aren't World-Class and What We Can Do About It 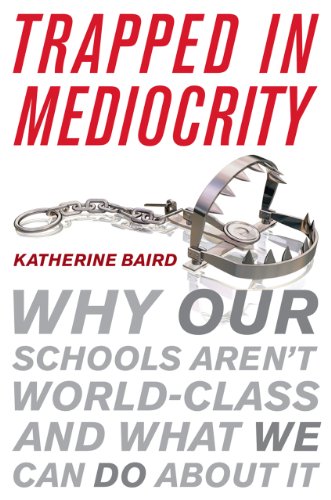 “. . . an ambitious synthesis of factors contributing to a problem affecting all of us.”

Synthesized in nine well-documented chapters is an astute analysis of the problems with our current educational system.

Katherine Baird, PhD, illustrates how America is falling behind other countries included in the Organisation for Economic Co-Operation and Development, (OECD).

But unlike many works listing only a litany of problems, Dr. Baird endeavors to identify what can be done to bring our educational system back on track and into line with other high-performing countries. The latter occupies a tenth and final chapter—a substantive proposal missing only one key—but critical—element that leaves the reader longing for yet another chapter.

The author indicates that “A recent government study of adult literacy estimates that 14 percent of adults in the U.S. have difficulty with tasks more complex than signing a form or filling out a bank deposit slip . . . among recent graduates seeking to join the Army, almost one-quarter are disqualified for lack of academic preparation.”

In another study, fewer than 40 percent of graduating college seniors were able to compare viewpoints in two editorials—or compare the unit cost of food items.

Literacy levels across all ages are declining.

Social, cultural, and economic factors also contribute to educational outcomes. Nevertheless, Dr. Baird asserts “our public schools contribute to, rather than ameliorate, the inequalities that children experience in their later lives.”

If we compare our standing of average PISA (Programme for International Student Assessment) literacy scores in select OECD countries for 15-year-old students, we are only slightly above average in Reading, below average in Math, and average in Science literacy.

Why is this so? Dr. Baird identifies four root causes of student underperformance: 1) an overly bureaucratic governance structure; 2) the absence of high national standards applicable to all students; 3) the absence of student support to achieve these standards; and 4) the lack of incentives for hard work.

History provides perspective. In the early 1900s only ten percent of students continued their education beyond the eighth grade. The nation evolved, making secondary education more necessary. Enrollment grew further during the Depression.

In 1942 college admissions requirements were liberalized and remain so to this day. Secondary schools became “smorgasbords” of courses with a de-emphasis on academic preparation.

Local educational bodies drove policy decisions. This evolved into a lack of consistency from state to state with little oversight nationally. States struggled with limited resources to educate their children. In 1970, the National Assessment of Education Progress (NAEP) was the first attempt at providing national standards and tests.

A seminal report in 1980 entitled A Nation at Risk spawned a flurry of reforms and an increase in school spending on a per student basis. In 2001, the No Child Left Behind Act gave the federal government “an unprecedented role in education.” Still, educational standards remained fragmented and inconsistent from state to state.

Instrumental in the tracking of standards is The Fordham Institute, which began to evaluate states on the specificity and clarity of educational goals in the areas of English, Mathematics, and Science.

Progress between the initial evaluation in 2000 and the most recent 2010 report is significant, but many states remain at the “D” or lower level. The author presents a credible argument for why this is happening.

In the succeeding chapters, Dr. Baird highlights what she sees as problems and documents her claims. Some of these problems include the educational environment, which translates to “days in school” but NOT how much time is actually devoted to teaching. Mandatory courses do not compare with those of other OECD countries. Teachers are poorly prepared for the grades or subjects they are required to teach.

There are written standards for a range of subjects, but testing is left to the states. Passing grades are set low to insure greater success.

The consequence of low expectations then translates to lower student effort.

This then compromises higher education’s mission, evidenced by the number of remedial courses some graduating seniors must take before matriculating in college level courses.

As an economist, the author demonstrates how this translates to the marketplace in terms of reduced productivity and increased wage disparities. She asks whether we are actually harming those we want to help.

Gains from setting higher standards are not obvious. Initially they appear to be achieved at the expense of the disadvantaged; however, the cost of mediocrity is only apparent down the road. And yet a bloated bureaucracy at all levels endeavors to maintain the status quo.

Activist parents currently devote more time to improving the educational environment, hoping to provide access to good schools for their children. Some throw up their hands and enroll their children in private or charter schools. This creates the dilemma of diminished voice and oversight in public schools.

And here is the harsh reality: Students as graduates come up against an unforgiving America. We are wanting everyone to succeed but without struggle. And there is little support for those who fail. This contrasts to other countries, where higher standards require uniform courses of study until age 16. These countries also have more generous labor and welfare policies.

In the final chapter, the author proposes a reform agenda, which includes: Reforming the educational governance structure; establishing high expectations for all students; providing adequate support to meet these expectations; and introducing strong incentives for students to work hard in school to meet higher standards.

What about the chapter that is left unwritten? It would include the HOW of the reforms that Dr. Baird proposes.

How, for example, would consensus be built for change within the bloated bureaucracies that have everything to lose? How will we pay for additional federal subsidies and wages when the nation is crushed in debt? How do we build on the documented successes of reforms already achieved? How do we make the models in England, Finland, Estonia, and Poland translate to our schools?

Dr. Baird’s work is an ambitious synthesis of factors contributing to a problem affecting all of us. It is one she has not only elucidated, but also meticulously documented in a clear and highly readable style.

The reader is brought along with summarizations; each premise builds on the last. It is a monumental effort that deserves the attention of educators at all levels. The next phase—i.e. the implementation—requires Dr. Baird’s deft hand as well.