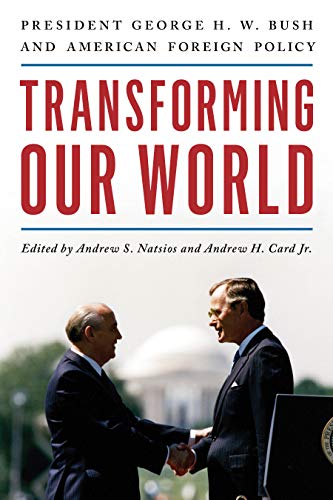 “Transforming Our World is an insiders’ account of the foreign policy ‘successes’ and ‘achievements’ of President George H. W. Bush, the nation’s 41st president.”

Transforming Our World is an insiders’ account of the foreign policy “successes” and “achievements” of President George H. W. Bush, the nation’s 41st president. This collection of essays written mostly by former members of the Bush administration’s foreign policy/national security team is a tribute to the late president that, unfortunately, often descends into hagiography. George H. W. Bush was a good man and a decent president, but he was not, as Andrew Natsios and Richard Haass contend, one of “the two greatest foreign policy presidents in the post-World War II period” (Truman being the other).

In virtually every essay in the book, an ex-Bush staffer or adviser characterizes the president as “uniquely qualified” to formulate and implement U.S. foreign policy. They point to Bush’s honorable service in World War II, his years in Congress, and to his stints as UN Ambassador, envoy to China, CIA Director, and eight years as vice president before becoming president.

To be sure, experience is important—Bush understood how Washington worked and had experience with world leaders prior to becoming President. But by his own admission, he lacked the “vision thing.” This was never more evident than in the closing days of the Cold War when Bush promoted the continued existence of the Soviet Empire under Mikhail Gorbachev even as it was crumbling throughout Eastern Europe and in Russia and the other former Soviet Republics. But few leaders possess the “vision thing,” and under most circumstances we are generally better off without visionary, crusading leaders.

Bush also lacked the “vision thing” at the end of the first Gulf War in 1991. Beginning in August 1990, Bush and his team used diplomacy and the UN to form a coalition of states to oppose Iraqi aggression in Kuwait. He then launched a quick and successful war to destroy Iraqi armed forces and liberate Kuwait, but he stopped short of marching on Baghdad and overthrowing Saddam Hussein’s regime.

Twelve years later, his son, President George W. Bush, fought another Gulf War that ousted Hussein from power but resulted in U.S. and allied forces becoming mired in a lengthy and disastrous occupation. Bush 43, unfortunately, had a vision of spreading democracy throughout the Middle East and that vision resulted in a foreign policy debacle that strengthened Iran and later under President Obama led to the return of Russian influence in the region.

Bush’s other major foreign policy accomplishments, according to the authors, were the peaceful reunification of Germany as a member of NATO and the maintenance of a stable relationship with China in the wake of the Tiananmen Square Massacre.

As with the fall of the Soviet Empire, Bush prudently managed the diplomacy that resulted in German reunification in NATO—diplomacy that involved calming the fears of both the crumbling USSR and America’s West European allies. Bush’s China policy, however, as former NSC staffer Douglas Paal notes, was not as successful and demonstrates the limits of personal diplomacy that Bush too often relied on. China’s Communist Party (CCP) leaders watched as communist parties throughout Eastern Europe and in the Soviet Union were toppled from power, and they were not going to allow that to happen in China.

Bush, like most of his successors, also failed to fully appreciate the CCP’s intention to challenge the United States for global preeminence. Again, it was a lack of geopolitical vision and a confirmation of Bismarck’s observation that “man cannot control the current of events, he can only float with them and steer.”

The contributors also applaud Bush’s commitment to multinational organizations—many of them associated with the UN. They praise his promotion of human rights. One ex-staffer places Bush’s humanitarian initiatives in the broad category of America’s “responsibility to protect” others who are being mistreated by governments around the world.

To some statesmen and international relations scholars, “compassionate realism” is an oxymoron. U.S. Secretary of State John Quincy Adams famously remarked that America does not go abroad in search of monsters to destroy. The American diplomat and historian George F. Kennan cautioned against grand schemes designed to remake the world. Even some of the Bush admirers in this book acknowledge that Bush’s proclamation of a “New World Order” after the fall of the Soviet Empire went a bit too far.

By their almost unconditional praise of Bush, of course, the contributors are also praising themselves. In each essay, the members of Bush’s foreign policy/national security team praise themselves. There is far too much patting each other on the back for the great work they all did. Humility is in short supply.

Bush was a competent transitional president who prudently guided the United States through the final stages of the end of the Cold War. Perhaps most important, he avoided the pitfalls of crusading presidents who sometimes overrate their capacity to change the world. That alone is a worthy achievement.