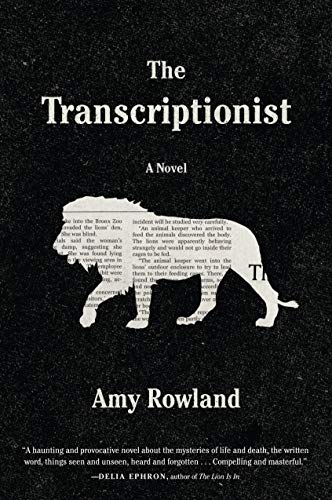 “The Transcriptionist is suffused with prescient insight into journalism, ethics, and alienation. . . . A thought provoking, original work.”

As newsrooms lie bleeding, victims of both technology and budget slashing corporatization, Amy Rowland’s debut novel could hardly have come at a more appropriate time. Set in fictional New York daily newspaper The Record, which is battling both, it’s a cautionary tale of embeddedness and exclusion—the decommissioning of conscience as one newspaper battles to survive and ethics take a backseat to bottom lines.

“The newsroom is more updated than anywhere else in the century-old building,” notes the novel’s protagonist, Lena, “where instead of bald, bespectacled men typing with one heavy hand and reaching into the drawer for the bourbon bottle with the other, it is the usual corporate subdivision: well-medicated activity, soundless keypads and clusters of low-partitioned cubicles in a rectangle that spans the entire floor.”

She sits on the 11th floor, an anachronism—Lena the transcriptionist. Not many people can even find the lonely room in which she works out her numbered days hooked up to a headset and a dictation machine. In fact, Lena isn’t even a transcriptionist any more. She is, “in the perplexing language of the corporate world, a Recording Room operator—and an endangered one at that.

“There is basic equipment required: a headset, a Dictaphone to play the tapes that must be transcribed, and patience, a willingness to become a human conduit as the words of others enter through her ears, course through her veins, and drip out unseen through fast-moving fingertips.”

Three black phones are mounted on a panel and linked to recorders so that reporters can call in and dictate their stories.

Most of what Lena types goes straight through her, like the undigested remains of a gulped down meal. “I’m turning into a tape recorder,” she says. “It’s frightening.”

Her body is merging with the newspaper, Lena fears, and she’s unspooling just as surely as the interminable tapes she’s come to despise. “I thought soon I would not possess a single thought of my own, would not possess even my own dreams.”

She’s tired of her secondhand life, Lena tells Kov, a mysterious, tie-wearing fellow misfit she discovers hiding out in another abandoned room in the newspaper building, cataloguing the obituaries, repairing ancient newspaper binders in a desperate attempt to give them some kind of permanence in an unhingeingly throwaway world.

Then a photo in The Record of someone who looks vaguely familiar pulls Lena out of her robotic reverie. “The woman broke into the Bronx Zoo two days ago, invaded the lions’ den and was killed,” says the accompanying article. “She was blind.” The dampness of her clothes indicates that she swam across a moat to gain access, adds the report.

Searching her memory, Lena remembers a brief encounter when she sat beside the woman, who was reading a Braille book on a downtown bus. “The blind woman . . . is frozen except for her fingers, which move across the empty expanse, stroking the invisible letters to bring them to life,” Lena thinks at the time. “She is a transcriptionist, too, except the words enter her fingertips where they exit mine.”

Obsessed with finding out why she would choose such a disturbing death, Lena determines that the blind woman’s story will be told. Shards of surrealism pierce the narrative, highlighting Lena’s own growing sense of unreality. Her overwrought campaign for the truth rocks the newspaper out of its corporate rut and shows Lena that her own life is far from over.

The Transcriptionist is suffused with prescient insight into journalism, ethics, and alienation. Hardly surprising, then, to discover that the author was herself a transcriptionist at The New York Times before moving to the Book Review. A thought provoking, original work.