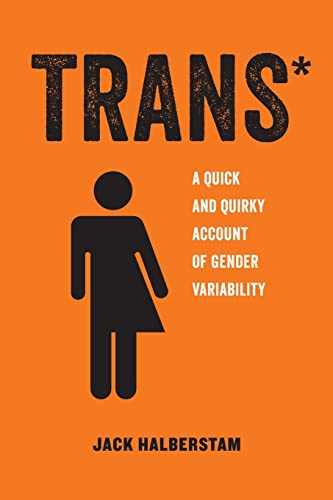 Halberstam begins his “quirky” text with a tribute to David Bowie, whose gendered appearance “part man, part woman, part space alien” inspires his reflections on the relationship between sex, gender, and embodiment.

Halberstam reflects on the names he has been called—“queer, lesbian, dyke, butch, transgender, stone and transgender butch—just for starters.” He chooses “trans*” as his title explaining that “the asterisk modifies the meaning of transitivity by refusing to situate transition in relation to a destination, a final form, a specific shape, or an established configuration of desire and identity.” He considers that the * enables trans* individuals to be authors of their own destiny and not to be required to explain.

It would seem that trans* used in this sense is pretty much equivalent to some means of the term queer, so the question has to be raised as to whether an extra term is merited or useful? And who is the audience for this book?

He locates the “god-like mania” for naming and classify to the 19th and early 20th centuries when sex, gender, and sexuality were also labeled and categorized as heterosexual/or homosexual, normal or abnormal.

But the current century has seen an explosion of concepts and terms including the famous 51 gender pronouns (71 in the UK and there are other versions) now offered by Facebook. The fact that many of the Facebook terms have emerged from the vernacular rather than from science, medicine, and psychiatry Halberstam sees as a cause for optimism, though recognizing that traditional binary naming systems are still going strong.

He also notes that the queer community of which he is a distinguished member wastes a lot of energy in arguments on terminology “calling each other out” for minor infractions of their own code, including presumably use of * as well, as parsing ever finer distinctions between their situation and that of other components of the LGBTIQ acronym! We rest our case.

In justifying the new term Halberstam draws a clear distinction between “transgender” which has relatively recently become the “acceptable edge of gender variance” (i.e. becoming a transman or a transwoman) and trans* “which takes the prefix for transitivity and couples it with the asterisk that indicates a wildcard in internet searches; it is a diacritical mark that poses a question to its prefix” as well as signalling the inadequacy of current binary system of classification. He acknowledges however that many critics have objected to the “bagginess” of trans* and its lack of specificity (which is presumably the point?) while others such as himself appreciate the * with its “starfish’s limby reach”.

As a tomboyish girl who finally had top surgery at the age of 54 Halberstam presents his case from a “transmale perspective” and privileges the experience of “trans*masculine subjects. This is not ideal, but it may be that trans*embodiment is more different than similar for transgender men and women.”

Do we see the emergence of a new binarism here? He is also inconsistent in that the chapter on Trans*Feminism does not privilege a “transmale” perspective but analyses the tensions between transgender women and womyn-born-womyn feminists.

An interesting section on the transchild shows how such children may “represent a gender instability that the family has both cultivated and rejected” and throw into question the “normal” socialization process. “New modes of parenting among white middle class ‘designer’ parents have shifted the coordinates of belonging such that the trans*child that might previously have been viewed as disruptive might now be displayed as a trophy, a mark of the family’s flexibility, a sign of the family’s liberal capacious borders.”

Halberstam sees transgender solely as a product of nature and culture with the transgender child being the product of social media, the object of new and public conversations about gender instability, the subject of several generations of activism etc. Straighter non-designer parents will of course try to re-orient their children toward the norm.

Halberstam provides many interesting critiques of media treatment of trans* concerns though these can only be fully appreciated by the reader who is also familiar with the same books, television shows and film.

Though “quirky” and interesting this book is certainly not a “quick” read as advertised, though it may have been quickly assembled from articles and reviews written at different times for different occasions and audiences. Will it convince its readers that we need the term trans* or is this simply a further fine parsing of the non-hetero-normative terminology to trap the unwary of all categories into political incorrectness!