The Trans Generation: How Trans Kids (and Their Parents) Are Creating a Gender Revolution 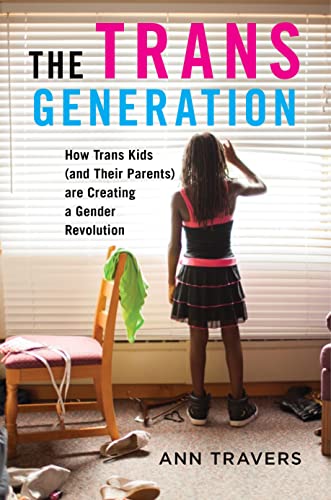 We tend to view childhood through rose-colored glasses, evoking an age of innocence and carefree days anchored by loving and protective families in safe and supportive Leave It to Beaver neighborhoods. But for many of us this was far from lived reality. Maybe we grew up in stressful family situations, or were locked into highly regimented school environments wherein conformity was the name of the game. And most children have very little autonomy to mitigate these givens and make individual lifestyle choices, being at the mercy of parental whims, judgmental peers, and absolute institutional authority.

The constraints of this childhood life chance lottery are compounded immeasurably if you are aware, perhaps from your earliest memories, that the sex assignment label you received at birth is just plain wrong—that neither your genitals nor your lifeway instincts fit in the binary box imposed on you by ruling social forces.

What if you were compelled to grow up imprisoned in the wrong box, forced to play the conventional gender game, likely not very successfully, incurring both the psychological scars of being untrue to yourself and various displays of homo-hatred from sexist and genderist everyday life social interactions? What if you weren’t even a clear-cut “misfiled person” such as a boy trapped in a girl’s body or vice versa, but some other evolving combination of non-binary, pansexual, polysexual, or asexual genders? What if you just want to be you?

This non-conforming sexual stigma is particularly traumatic for children who are further marginalized by their class, race, and place accidents of birth in terms of their positioning in the power and privilege hierarchy which strictly limits their access to the scarce resources available to them to improve their situation. Being trans is already a huge strike against you in the dominant binary social order. Being poor and non-white and located in less “progressive” parts of the world can mean a mountain of obstacles and opprobrium to climb.

These children are the focus of sociologist Ann Travers in her book The Trans Generation: How Trans Kids (and their Parents) Are Creating a Gender Revolution. Travers shows that from very young ages, some at two and three years old, these children know that they do not conform to the sex label assigned to them. But neither do they necessarily fit tidily into other gender-conforming categories. Rather, they tend to see gender as a spectrum and are desperate for space to determine their own locations.

How these highly vulnerable children make their voices heard, or not, to family, friends, schools, health care providers, the legal system and the general public, and what can be done to make life better for transgender kids in particular and for all kids in general lies at the heart of this empathetic, incisive, and compelling work.

Based on interviews with 19 transgender kids, from 4 to 20 years old, and 23 parents, as part of research  conducted over 5 years in Canada and the US, The Trans Generation offers rare insights into what it is like to grow up trans today.

Travers defines transgender, and its shorthand trans, with a broad and historical brush to include all people who defy social binary expectations regarding gender, not only transsexuals who medically and socially transition from their assigned sex to their self-defined sex/gender.

As a transgender person, Travers is perfectly positioned to re-present from first-hand experience the difficulties of growing up trans and the challenges this poses for parents in their struggles to smooth the life paths of their young.

Grounded in her informants’ own words, Travers takes the reader inside the day-to-day realities of trans kids from daycare to birthday parties and from the playground to the school bathroom. In the process, she uncovers myriad micro-aggressions and larger assaults encountered on a routine basis as they cope with the restrictive ways in which sex categories regulate their daily lives and pressure them to deny their gendered selves.

A short introduction positions Travers as a transperson, trans activist, and scholar primed to assess the impact of evolving policies in North America around gender self-determination and lays out her fieldwork methodology which is particularly important  when researching vulnerable populations.

A theory chapter digs into the range of gender nonconformities and survival strategies amongst these informants and highlights the precarity of their positions on an everyday basis, not just the cases of extreme pain and suffering including bullying and violent attacks triggering self-harm and suicide that tend to be highlighted by the media. These coping behaviors are framed in an intersectional approach including disability theory showing the interplay between race, class, and gender and how these might play out in social activism to mitigate inequality and improve the livability of trans kid’s lives.

Subsequent chapters focus on schools, public spaces, parents, and supportive healthcare, ending with a summary conclusion. The Schools chapter examines the multiple ways in which trans kids are disabled in educational settings and the consequences of this for their present and future precarity.

The Spaces chapter “tends to crystallize around bathroom and locker room access because these spaces are central to the maintenance of the binary gender order.” Here, the section on the role of modern sports in normalizing the two-sex system is particularly illuminating, especially in dismantling myths about the gender binary in children’s recreation.

The Parents chapter focuses on “the extensive (mostly) maternal labor that is required to reduce the precarity of transgender kids both within family and friendship networks and in gendered environments outside the home.” The significance of parent-led activist networks is central through the system remains stacked against the less-privileged families.

The chapter on supportive health care highlights these disparities in terms of inclusive trans access to appropriate care. While the partial paradigm shift away from gender-reparative toward gender-affirming care such as the life-changing hormone-blockers is encouraging, the overall medical model of “treatment” remains dominant and access to care is skewed toward the less precarious.

The book ends with a discussion of the limited gains made by the LGBTQ movement in North America in an increasingly contested cultural context in what is essentially a call for concerted action against genderism, sexism, racism, and xenophobia of all kinds. “But it is not enough to hope that . . . trans kids are able to find that space: we have to go beyond hope and build a big enough lifeboat for all of them—and by extension, all of us.”

The Trans Generation is intended to be read by a broad audience including academics, students, parents, family, and friends of trans kids, educators, social activists, and all who work with and care for kids. The writing is straightforward and unpretentious, avoiding obscure theoretical wrangling for the most part, though detailed special language looms large as part of Travers’ determination to be true to her informants’ descriptions of how they self-identify.

A detailed glossary assists in teasing out the nuances of the distinctions between, for example, agender, asexual, demi-sexual, intersex, transsexual, etc. It would also have been helpful to the general reader to include some more operational definitions of key fundamental theoretical terms and concepts that academics take for granted, such as patriarchy and neo-liberal capitalism.

What really makes The Trans Generation stand out as a landmark contribution to LGBTQ studies are the voices of the trans kids and their parents talking about their life predicaments in eloquent, often heartbreaking interview extracts that shout and sing their torments and triumphs. By the end of the book, the reader feels like she knows the informants personally, for example sharing the anguish of a parent watching her child realize the full extent of her exclusion from “normal” society.

“When Wren was five, still so small really, she told me that the bathrooms at the church we attend made her sad. She stood before me as she said this, a small and anguished child, frozen between two doors. She literally did not know where to go—but she knew that loss would be the result of either choice she made.”

The other voice that sticks with you is that of the author, whose skillful and subtle presentation of her own positionality as a transperson who has spent her life dealing with her sex branding at birth makes you cry and cheer her on.

“The research and advocacy I do on behalf of trans kids comes from places of hurt, regret, and desire for redemption in my own history, and in this sense, it is extraordinarily selfish. I wish I had been allowed to be, and had the courage and support to be, a happier and kinder child and young person, but in parenting and interacting with kids to enable them to be authentic, happier and kinder than I was, I find my own tragic gap and the core political and intellectual purpose of my mature years as a scholar.”