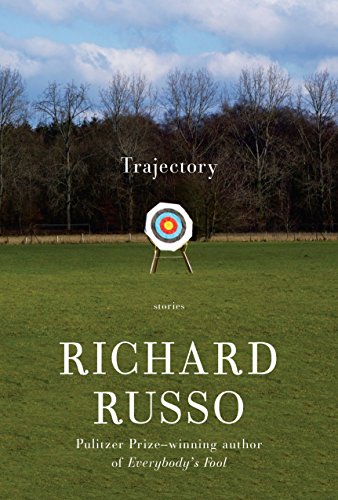 For dedicated fans of Richard Russo these four stories mark a break with his usual “blue-collar” territory.

In “Horseman” a professor tries to deal with student plagiarism and is assailed by unpleasant memories of criticism of her own writing by her former professor, accusing her not of plagiarism as she first thought but of effacing herself from her own writings. Though not overtly about women finding confidence in a man’s world, all the chief protagonists are men—the plagiarist, the professor, her colleagues, the bartenders, her husband and son. The atmosphere is appropriately stifling.

In the longest story in the book entitled “Voice,” a middle-aged man struggles to make sense of his relationship with a domineering older brother on a trip to attend the Venice Biennale. There are side stories featuring other members of the travel group, and flashbacks to unresolved issues in the class he taught.

Fraught fraternal relations and financial anxieties are the chief protagonists of “Intervention” along with the main character, Ray the realtor. In the fourth and last story “Milton and Marcus,” a lapsed novelist attempts to rekindle his occasional screenwriting career through bruising encounters with some “big beasts” of the film production industry.

Strained relations between brothers and male colleagues are a strong theme throughout this collection, and women characters tend toward the shadowy.

Each of these stories is gripping in its own right but the reader is advised to avoid the temptation to devour the whole book at a sitting as such indulgence throws into unflattering relief the authors’ repeated themes and preoccupations.