The Tragic Mind: Fear, Fate, and the Burden of Power 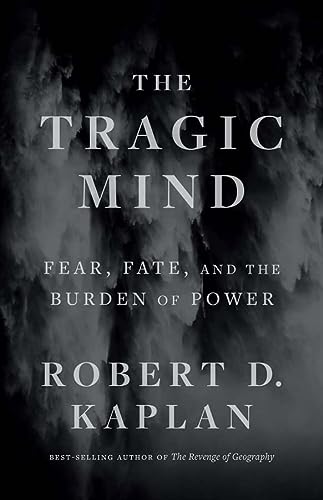 “The Tragic Mind . . . is a synthesis of what [Kaplan] has learned from seeing war up close, studying how statesmen have approached the knowns and unknowns of global politics, and his appreciation of the tragedies that fill the pages of history from ancient times to the present.”

In this short but profound book, geopolitics expert Robert D. Kaplan promotes a “realist” foreign policy to both protect America’s global interests and to avoid catastrophe. He uses not only the lessons of history but even more the insights of literary classics to explain the need for statesmen to develop a “tragic mind” that understands human limitations and that helps “guard against hubris.”

Kaplan has written some 25 books on history, war, and geopolitics. He is one of our nation’s most important observers of international relations. He brings to his work a knowledge of the inextricable link between history and geography, experiences of the chaos of war as a foreign correspondent embedded with American forces, and a careful study of the relevance of classical geopolitics to international relations.

The Tragic Mind may be Kaplan’s shortest book but in one sense it is a synthesis of what he has learned from seeing war up close, studying how statesmen have approached the knowns and unknowns of global politics, and his appreciation of the tragedies that fill the pages of history from ancient times to the present.

The statesman who “thinks tragically from the outset,” Kaplan writes, will fear the future “and is therefore aware of [his] limitations, and thus can act with more effectiveness.” The tragic mind understands that the world presents challenges not just between good and evil, but also between evil and evil, and that often the best choice is to do that which will avoid the greatest tragedy.

Kaplan reaches back to the ancient Greeks and Shakespeare to gain insight into the continuity of human nature and human behavior across the ages. He also adds a sprinkling of the works of Camus, Melville, Conrad, and Dostoevsky. Such a literary journey, he believes, teaches us lessons about the need for humility, the dangers of hubris and pride, the ubiquity of human ambition, and what Euripides called the “terrible power of the irrational.”

The tragic mind, Kaplan writes, values order over chaos yet understands that order can descend into tyranny. Both Aeschylus in his Oresteia trilogy and Shakespeare in his play Titus Andronicus teach the necessity of order. Even tyranny, unless it takes the form of a Hitler, Stalin or Mao, is better than anarchy. Kaplan saw firsthand in Iraq the evil of Saddam Hussein’s regime whose fall at the hands of American forces undermined order and led to more evil and anarchy for Iraqi civilians, and drew the United States ever deeper into a military and political quagmire there. The same held true in Libya with the fall of the Gaddafi regime and the anarchy that followed.

And “grand ambition” and hubris can produce unintended consequences that a tragic mind might have foreseen. The Greeks, notes Kaplan, wrote about tragedy resulting from hubris and unbounded ambition. Shakespeare’s Julius Caesar, likewise, involves “the irresistible pull of ambition” that led to Caesar’s rise and assassination and the resulting civil war. It was the “grand ambition” of the George W. Bush administration to spread democracy throughout the Middle East that resulted in the Iraqi and Afghan insurgencies and prolonged wars.

Interestingly, Kaplan’s model American statesman is George H. W. Bush, though he has high praise, too, for Richard Nixon and Henry Kissinger. Kaplan calls Bush “the last American president to embrace the use of military power while thinking carefully and tragically about it.” Bush, Kaplan explains, was a model of prudence and character during the first Gulf War, the fall of the Soviet Union, and U.S. relations with China after the Tiananmen massacre.

Kaplan concludes his book with a warning that a “tragic sensibility” is needed again as we manage great power rivalry in Eastern Europe and the South China Sea. He reminds those journalists, intellectuals, and commentators who seek to right all the world’s wrongs that “every villain is not Hitler and every year is not 1939.” We live in a world of constraints and limits. The tragic mind cautions prudence, patience, and “an awareness of the narrow choices we face, however vast the landscape: the knowledge that not everything is possible, regardless of the conditions.”