The Tragedy of William Jennings Bryan: Constitutional Law and the Politics of Backlash 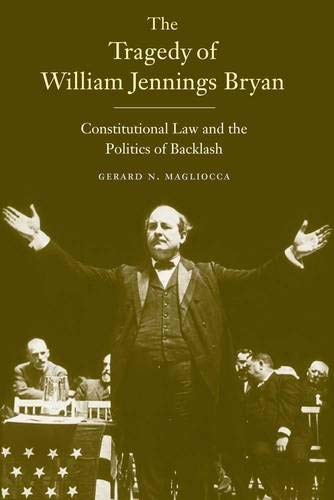 The title is a bit of a misnomer. The subtitle is more accurate. This is not the story of William Jennings Bryan, “The Boy Orator of the Platt,” or the Populist Party, or of Bryan’s great defeats of 1896, 1900, and 1908. This is about the Constitution, the Supreme Court of the United States, and the effects generational politics had, and still has, on both.

Gerard Magliocca meets his goal of writing an excellent treatise on the effects of a third party political movement on the Court’s decisions and its self-protection from a new generation of political thought. This is also a look at contemporary political third-party movements.

There is a caveat. For the reader to fully appreciate Professor Magliocca’s work, one must be familiar with the biography of Bryan; the histories of Reconstruction and the Populist movement, and court cases of the period. Professor Magliocca presupposes, as a law professor does, that the reader has this information.

Prior knowledge of Plassy v. Ferguson (163 U.S. 537) and Pollock v. Farmers’ Loan and Trust Company (157 U.S. 429 and 158 U.S. 601) is most helpful to understanding the thesis, but not truly necessary. It is also helpful to understand Marxism (both socialism and communism), the Jim Crow laws, and constitutional arguments concerning states’ rights and sovereignty. This includes the political motivations of placing contract law and property rights above human rights as it concerned voting rights in the South at the end of the 19th century into the late 20th century.

The focus is not the specifics of each event or decisions of the court, but on the circumstances behind the legislature’s, Court’s, presidential candidate’s, and the President’s political positions and the fear-mongering that plagued the Populist Party and William Jennings Bryan.

“Bryan’s ability to lose worthy causes with unpersuasive arguments was uncanny,” writes Professor Magliocca, a statement seemingly in contradiction to Bryan’s place in history as one of the great orators of his time with historians of American rhetoric rank Bryans’ “Cross of Gold” speech as one of the greats. Yet it was not that speech that lost the 1896 election for Bryan, but the cause that it supported, the opposition to the gold standard.

Professor Magliocca is also able to show that Bryan and the Populist movement had an uncanny “role in bringing about the most profound change in American politics between Reconstruction and the New Deal”—a third-party role that continues today.

The arguments being placed in front of the reader are 1) that sweeping change is started by a small group of “radicals,” 2) that change happens after the opposition takes power, and 3) these changes are defined by the perceived wrongs that must be corrected. In the case of the last, Professor Magliocca argues that the only way this change happens is when a new generation of politicians comes to power and the older generation is attempting to protect its position.

“The Cross of Gold” speech and the 1896 “Denver Platform” of the Populist Party brought the Democrats and Republicans into the same camp when if came to opposing this radical. Bryan was considered a “socialist” and a “communist” by the conservatives of the day. The same rhetoric used to describe Bryan and his followers is not dissimilar than what is being used today to define outlier political movements or the politically liberal camps today. Yet while losing the 1896 election, it was the “Denver Platform” that gave the Populist Party its strength and changed the course of American history.

Professor Magliocca also makes the argument for and against the federal income tax in terms of the Constitution, the Court and a tax rebellion that have been part of this country’s structure since the 1760s, and continues today. Many of the ideals of a federal income tax are discussed and, depending on one’s personal politics, can either justify the 16th Amendment or scuttle it completely.

This is not a book to put one to sleep nor is it so riveting that you cannot put it down. But its logos and pathos are evident throughout. The reader should take time to absorb the content. Even with a seemingly lack of clarity concerning some of the issues, this is a well written digest of the times and politics of the Bryan era, the immediate and long term solutions to the “Bryan problem,” and how legislatures and the courts move, even today, to protect the ideals of an older generation from the “radical” ideals of the new. From the Pullman strikes to the 16th Amendment, it is easy to follow how each generation seeks its own accord.

It is also easy to make the connection, correct or misconceived, with today’s Tea Party movement and the “radical” move towards a more conservative government and court. Watching from the sidelines, one can see the generational movement towards court reinterpretation of the Constitution waiting on the horizon. History, according to author Magliocca, foretells the change. Time will only verify the course corrections.