Trades of the Flesh 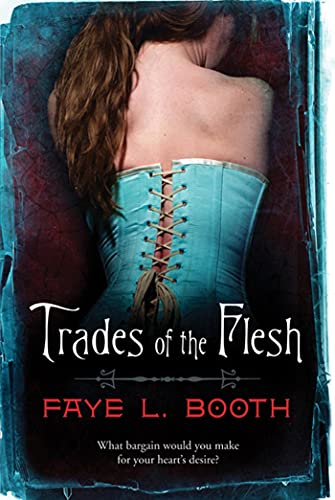 Trades of the Flesh takes place just over three decades after Faye L. Booth’s debut novel, Cover the Mirrors. Both books are set in Preston, a slum in Liverpool in England, during the second half of the 19th century. While her first novel looked at the Spiritualist movement and the role of scam artists in them, her second novel focuses on the sex trade in various degrees beginning in 1888 through 1889, less than a year of time.

If that year seems familiar, it is because that is the year that Jack the Ripper’s most famous murders occurred in Whitechapel in London. While Liverpool is not London and travel was not as quick or cheap as today, it is quite true that the murders showed up in newspapers not only around England but also throughout Europe and even popping up in the American and Canadian papers. Talk about the Ripper though also turned attention toward prostitution, pornography, venereal diseases, and the conditions of the poor in both salacious and humane ways.

All of these issues are part of the narrative that Ms. Booth weaves as she tells the story of one young poor woman, Lydia Ketch, who promises her mother to become a prostitute to support her younger sister, Annabel who shows promise in school. It was less common for girls to receive an education but there were indeed new professions for educated young women that the age of Industrialization has created. While a modern reader might cringe at Mother Ketch’s demands and her daughters’ obedience it is considered an evil necessity by all the characters we meet just as it would very likely have been by the people living in the area during this period.

The Ripper is there, in the background, but our Lydia hardly has time to worry when she needs to be more concerned with pleasing her Madame, pleasing clients, and trying to think of her future. This is where Ms. Booth does a good job of taking us out of a world of merely feeling sorrow or horror at the conditions of the world and letting us see the honest possibilities open to people of various classes. This is not a romance, for there is not happily ever after nor do our two main characters, Lydia and Henry, start off disliking let alone hating each other as that genre often requires. It is not a mystery, for no one is truly invested in finding the Ripper and other mysteries are really just the lies people tell to maintain their own sense of self or to protect those they love.

Instead this is a historical novel with some elements of erotica and romance but neither taken beyond what the characters in their position could seriously expect to happen. Their interactions may seem stilted to us only if we do not understand that at every moment, even up to the end of the novel, the character’s true thoughts, true feelings, and true self are hidden behind a complex drama that clients, prostitutes, the middle class, and the poor play out with each other on a day to day basis. This agreed-to yet undiscussed play re-enforced the roles and kept the divisions between classes clear—a necessary part of English society at this time. This is not to say that the book is perfect—there are certainly comments that struck this reviewer as odd given the context but the vast majority of the books flows quite well if you understand the history and culture of the setting.

One cannot call either Lydia or Henry a hero; they simply are too far removed from any altruistic motive to be considered that. They are two people who find each other and encourage each other—as best as their differences allow—to strive for something beyond their prescribed roles. This is primarily true for Lydia whose concern for her future starts to pay off by the novel’s end. Unfortunately this means that the book feels unfinished, unsatisfactory for readers who can connect to her on some level; nonetheless, Trades of the Flesh also does not seem to be a set-up for a sequel since we do come to conclusions, however sad, for each of our characters. Many readers will simply be left curious to know if Lydia will succeed in her plans.