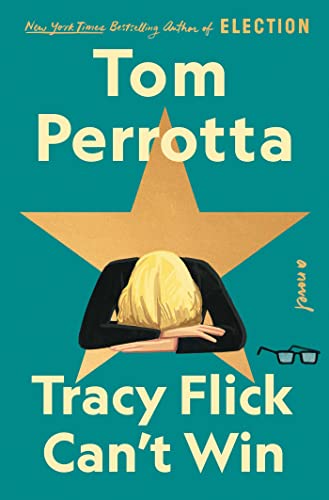 “Tracy Flick Can’t Win is a deeply humanist work by a master of observation.”

Tracy Erin Flick, famously the nearly dethroned senior-class president in the bestselling Election by Tom Perrotta (and the subsequent movie) is back in high school for its sequel. Tracy Flick Can’t Win catches up with our heroine in her forties, stuck in an unfulfilling assistant principal role. She didn’t have the glamorous career she imagined back then, but she does have a shot at a pinnacle of sorts—replacing the principal, who is retiring to find himself (see Albert Brooks in Lost in America) with a roadgoing RV.

The reader roots for the hardworking Flick though she’s something of a prig, because she clearly deserves the job—especially considering the competition, a lazy administrator who also happens to be the only winning football coach New Jersey’s Green Meadow High School ever had.

Perrotta found a great way to tell this engaging story. The chapters are told in the first-person viewpoints of a large cast of characters—Flick; the tech gazillionaire head of the school board; the retiring principal; the taken-for-granted school secretary; a star football player who briefly made the NFL and is returning to be honored at the new Hall of Fame—except in the instances where we get a useful third person.

Perrotta is one of the most readable novelists we have, and his books—with the screenplay practically written already—are movie naturals. (Both The Leftovers and Little Children were filmed.) Reese Witherspoon would slot right into the big-screen version of Tracy Flick Can’t Win. Because, as we all know, she’s not going to get knocked down without a fight.

Tracy initially thinks she’s a shoo-in. Isn’t that what everyone tells her? But as she herself eventually realizes, she’s admired and respected without actually being liked. It’s the same problem she had as a student—she’s essentially a loner who looks around, sees indifference and downright incompetence, and decides she has to do it all herself. And now she’s a single mother who has to force herself to attend school functions and the big game, when a regular-guy booster would probably be preferred. The opposition is not all sexism, but that’s in there, too. Perrotta has been living with the Flick character for decades, and he’s probably got some ambivalence—maybe he’d vote against her if he were on the school board. But maybe not.

Tracy Flick Can’t Win is a deeply humanist work by a master of observation.