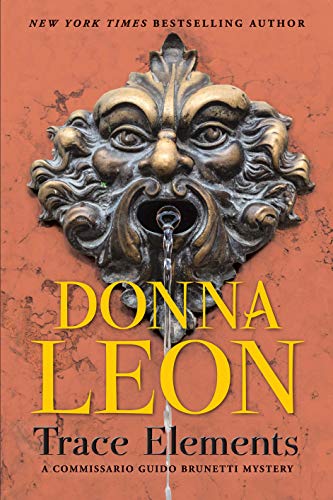 “Donna Leon’s ability to paint both her city of Venice and the quandaries of commitment make this Trace Elements a quietly powerful book.”

It’s tempting to itemize the many pleasures of a Donna Leon mystery: reconnecting with Commissario Guido Brunetti, who is both kind and clever and often becomes appropriately infuriated with the injustice and malice his job exposes him to; exploring Venice through his gaze, which is the gaze of a lover who barely notices the latest attire but instead revels in the scent of the body, the shared history, the upcoming meals together; and tiptoeing behind Brunetti in order to slide, unnoticed, into his Venetian family’s home, where amazing culinary delights appear routinely, teenaged children become wise, and forgiveness and intelligence are equally prized.

And then there are the plots—each of which reveals, in layers, the deeply prized (and sometimes fragile or misled) culture of Venice and its surroundings.

In Trace Elements, Leon opens with a dying patient at a hospice care facility who’s requested a chance to speak to the police. When Brunetti and his not-yet-seasoned colleague Claudia Griffoni respond, they find Benedetta Toso too ill to give a coherent report. But her husband, recently dead on a motorbike ride that ended in a canal, is clearly on the woman’s mind, and what she is able to say is disturbing: “It was bad money. I told him no,” the patient says clearly, in her first lucid moment of the visit, followed a few minutes later by “They killed him.” And that’s about all she can convey before collapsing.

Struck deeply by the woman’s suffering, Brunetti and Griffoni commit themselves to tracking down what must, at least to the dying signora, have been a serious crime, perhaps murder.

Fans of the series will be enchanted by the adroit research that the police department’s administrative “assistant” (everyone knows she’s far more than that), Signora Elletra, provides as Brunetti pulls apart the strands of what the dead man had investigated, and his role in possibly hiding or altering data at a water testing lab. Of course, Brunetti’s boss, Patta, gets in the way, and the Commissario’s wife Paola provides sensible commentary. Most poignant, though, are the small interludes of conversation between the investigators and the people they care about or care for.

For instance, Brunetti’s daughter Chiara challenges her father about one of his old friends whom she calls “Zio Giulio”: “Is he in the Mafia?” the teen asks bluntly. As Brunetti struggles to put this into context, he gropes: “His father was. . . . So that’s what the Mafia is like. If you’re born where it is, your thermostat adapts to it. Not everyone’s, but lots of people’s.” Chiara wants a more definite answer, and Brunetti is stranded among all the details and history that tint the picture for him: “How to tell her about Giulio and his connections, his law practice and the clients he defended, the things he could make happen with a phone call?”

This interlude in fact is prelude to the kinds of moral choices Brunetti and Griffoni must repeatedly struggle with, as they discover who in the water pollution testing world is committing crimes, at what level, and who can be held responsible—in fact, how they may need to assist Justice in balancing the scales, strictly legal or not.

Donna Leon’s ability to paint both her city of Venice and the quandaries of commitment make this Trace Elements a quietly powerful book. The plot and related risks are less dramatic than usual, and perhaps less memorable, but in the long run, this is a book rich with questions of honor and trust, offered from the hand of a master storyteller.