Tough Without a Gun: The Life and Extraordinary Afterlife of Humphrey Bogart 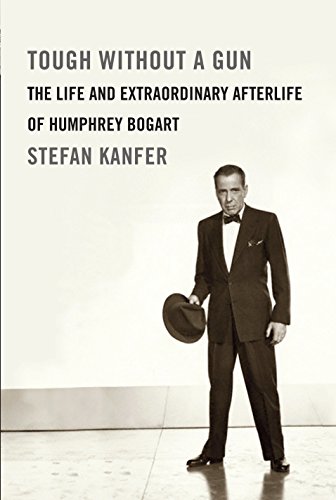 If, upon taking this volume into his hands, the reader can momentarily bypass the rather excellent, evocative title—Tough Without a Gun—and the wonderful menace suggested by the cover photograph, and consider for a moment the book’s subtitle, he will likely scratch his chin and think, “Now here’s something I haven’t seen before.”

Just when the reader is becoming a little jaded, what with one celebrity memoir following the next like chocolates in Lucy’s chocolate factory episode, and with some sinking so low as to present photographs of a given celebrity’s literal laundry list and presenting it as a new insight into the lives of movie stars, while other writers choose fiction instead and write about film stars from the point of view of the star’s pet or the maid’s cousin or her second-grade teacher, here at last is something new. A book that, right there in the subtitle promises not only to contain the full timeline of the life of screen icon Humphrey Bogart, but to also, much more remarkably, fill us all in on what the big guy’s been up to since his death, some 60-odd years ago. Right?

So the reader begins to read, no questions asked.

Early on, author Stefan Kanfer offers a rather nice summation as to why, out of all of Hollywood’s leading men, Bogart offered such a lot of great material to comics and impressionists. “Impersonators don’t ‘do’ Tobey Maguire, Brad Pitt, or Leonardo DeCaprio, or Christian Bale et al,” Kanfer quite correctly states, “because these actors don’t have distinctive voices or faces. This is sharp contrast to the leading men of the past. . . . And first among those equals was Bogart, the most imitated movie actor of all time. His unique, almost musical sibilance, his creased frown and rare, infectious smile gave him a quality that was at once dangerous and sympathic.”

What follows is a faithful retelling of the life of Humphrey Bogart, son of well-to-do Dr. Belmont DeForest Bogart and famed illustrator and early feminist Maud Humphrey, whose unhappy union produced three children, Humphrey, the eldest and only son, and his sisters Frances and Catherine. We find that young Humphrey, from his earliest days, had two great loves in life—sailing and show business, two loves that would endure for the whole of his life. Thus he soon defies his parents’ wishes that he follow his father into the field of medicine and, instead, tries his hand at acting. Then stage management. Then acting again, in spite of the fact that, in these early days, he seemed to have no talent for it.

But talent he would uncover as he worked hard to develop skill. And we walk with him, slowly—sometimes so exceedingly slowly that in spite of knowing how the story ends, we still might council Humphrey that is might not be too late after all to give medicine a try.

Somewhere just before Humphrey Bogart at last receives his breakthrough role in the Broadway version of Petrified Forest, the reader suddenly, snatching herself alert while drifting off to sleep, has a realization. And it is this: that Tough Without a Gun is a work of second-hand sources. That the author never quotes directly from any new interviews, even though plenty of sources—including the fact that wife Lauren Bacall and his children with her are still very much among the living and, one assumes, available for comment—weakens the text.

All quotes included here are taken from other biographies of Humphrey Bogart, as well as from autobiographies and memoirs of other Hollywood types, chief among them Louise Brooks, whose 1982 volume LuLu in Hollywood is quoted again and again, as if Louise Brooks were the last word in Hollywood history.

Thus the book reads rather like a term paper for a beginning film studies class: one in which the naïve student feels the need to justify Humphrey Bogart’s place among the first tier of Hollywood greats. Or worse, for great stretches it reads as if it were the comprehensive notes of a high-school debate team, whose task it is to present the pros and cons of: Resolved, “Humphrey Bogart was the most iconic American film star of the 20th century.”

Indeed, in these pages we are given the life of Humphrey Bogart in its entirety, as well as an overview of most of his films, and some nice, juicy anecdotes concerning his more important films that would have been all the more juicy had Stefan Kanfer not simply repeated them from other books written by other authors.

Tough Without a Gun is, therefore, a book without any new details to offer, or new insights, written without nuance—even though the subject of the book was one of film’s most nuanced actors.

We are given Bogart’s life story once again, as we—and Kanfer—have read it before. It’s all there, Bogart the man, his politics (complete with a very good overview of the Hollywood blacklist) his marriages, his few failures and many tremendous successes: Casablanca, The African Queen, In A Lonely Place, High Sierra, The Caine Mutiny, To Have and Have Not, and Key Largo chief among them.

We are even told a nice anecdote about the film A Star Is Born, the first version with Fredric March and Janet Gaynor: “Every year, on his birthday, he (Bogart) would screen it with tears streaming down his face at the fate of Norman Maine, a onetime matinee idol down on his luck. . . . Asked why he was so obsessed with the film, Humphrey explained that he strongly identified with the Maine character: ‘I expected a lot more of myself, and I’m never going to get it.’”

Nowhere in the pages of Tough Without a Gun is there a major moment of discovery, nowhere, except regarding Bogart’s fixation with Mr. Norman Maine.

But wait, we were promised something very new indeed. . . .

At the end of the eighth chapter, which details his battle with cancer, early on the morning of Monday, January 14, 1957, Humphrey Bogart succumbs to the disease and the world mourns. Days after, director John Houston gives the eulogy as the family and friends gather to mourn. In what author Kanfer beautifully calls “a distinctive papery baritone” Houston concludes that, “He was endowed with the greatest gift a man can have: talent. The whole world came to recognize it. . . . We have no reason to feel sorry for him—only for ourselves for having lost him. He is quite irreplaceable.”

Here, most biographies would end, thanking those who helped make them possible. But turn the page, and, as promised, we are treated to two more chapters dedicated to the enduring afterlife of the Zombie Bogart.

Or so one would assume. But instead, this tepid book becomes positively room temperature as it reminds us that we have Woody Allen and Play It Again Sam to thank for Bogart’s continual presence in our lives—not to mention potheads, who turned his last name into a method of holding a joint (four fingers and a thumb, just as Bogie held his ever-present cigarettes), a method that does not involve sharing it with the person next to you, hence the term “bogarting.”

So best to end with the man himself, flickering (with the exception of The African Queen) in black and white. Best to end with a montage of Bogart: his face, his gesture, his expression of malice and vulnerability all at once yielding to a toothy grin, a little man made large—a pit bull in a Jack Russell terrier’s body. Best to leave him there on the big screen and to return to him there when return to him we do.

Because any of his classic films will tell us so much more about him than we can learn in the pages of Tough Without a Gun.