Tough Love: My Story of the Things Worth Fighting For 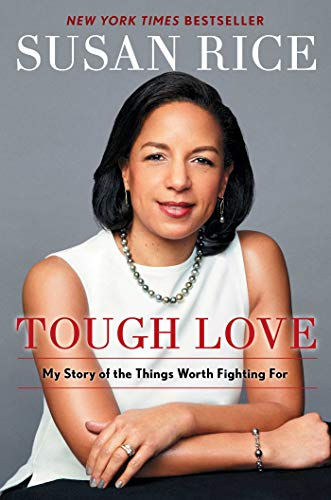 “Tough Love should be recommend reading for students and interns working for NGOs, and nonprofit organizations whose work and research covers policy concerns.”

The first thing to call the reader’s attention to in Susan Rice's new book is the elegant portrait of a beautiful, powerful, smart, and gifted woman on the front cover.

As biographies go, Rice's is a deeply personal narrative, moving from the origins of her father's family tracing that lineage from slavery in South Carolina and her mother's family of Caribbean immigrants into Portland, Maine, in the early part of the 20th century.

Her father, Emmett J. Rice, was the first African American member of the board of governors of the Federal Reserve Bank, appointed under President Jimmy Carter. Her mother, Lois Dickson Rice, was scholar and pioneering founder of the Pell Grant. Though their marriage ended in a bitterly contested divorce, they remained central figures in Susan and Johnny's, Susan's brother’s, life. Before the publication of her book, both parents had passed away, her father in 2011 and her mother in 2017. For three generations the Rice's family has been close knit and keenly astute in utilizing resources and developing skills to navigate the American landscape of success.

Rice takes us through the rocky often private moments that retrospectively she views as having forged her tenacious, "get shit done," personality. She weaves these personal experiences into backdrops of her professional development. We see a person, an African American woman, possessing exceptional intelligence from an early age, honing it with the help and support of her parents and key mentors into academic and an eventual professional career in government.

Rice is a historically unique individual having served as the first African American female American Ambassador to the U.N. under the first African American president of the United States, Barack Obama, subsequently serving the same president in a second term as National Security Advisor. Neither Andrew Young nor Condoleezza Rice, no relation, can match that distinction. Prior to serving under Obama, she was the Assistant Secretary of State for African Affairs under President Bill Clinton.

No doubt as time adds years to the publication of the book, critics, particularly her detractors, may find fault with the outcome of some of the policy choices during her career. She is more than fortified to handle it. Aside from that, Rice recounts her vilification by Fox News after the Benghazi attack along with the regrettable consequences of ending the regime of Muammar al-Gaddafi.

More importantly, it's worthy to note that Tough Love can be very useful to anyone pursuing a career in government, business, or any field of academic endeavor. It isn't a how to guide for success, rather its value lies in the wisdom she has gained both from her family and also from the triumphs and mistakes she's learned from professionally.

Rice has written an inspiring book in which she tells us that she has been committed to service all her life. From that comment it earned her the unique opportunity to serve Present Barack Obama and address critical issues from the Arab Spring to Ebola, securing a nuclear deal with Iran and curtailing, if only temporarily, Chinese cyber theft of intellectual property.

In the final chapter she reflects on her government career at the end of the Obama administration and offers a sobering, thoughtful yet hopeful assessment of America, its role in the world, and how the disappointment in the election of Donald Trump threatens the work and progress of President Obama's eight years in office poses for democracy. It's a stateswoman's admonition for the country to take heed. In this we are presented with someone who is genuinely passionate about the health and value of the vibrant diversity of American culture.

Tough Love should be recommend reading for students and interns working for NGOs, and nonprofit organizations whose work and research covers policy concerns.

John B. Parks is Board Chair of a small nonprofit, the Frederick Douglass Foundation. He was previously on the faculty of Howard University in the Political Science, History and Afro-American Studies departments and has also been an education consultant to D.C. public schools. He is the contributing author of The Black American Narrative Continued in Charles Johnson: Embracing the World.