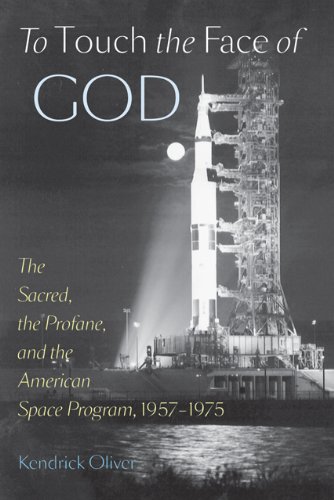 “To Touch the Face of God . . . support[s] the American need for both heroes and villains of biblical proportions to change the world.”

Ronald Reagan’s last words in his first of many eulogies after the destruction of the space shuttle Challenger on January 28, 1986 were, “We will never forget them, nor the last time we saw them, this morning, as they prepared for their journey and waved goodbye and ‘slipped the surly bonds of earth’ to ‘touch the face of God.’”

For many, “to touch the face of God” sounded as if it were purely biblical. These final words, however, originated in Cuthbert Hicks’ Icarus: An Anthology of the Poetry of Flight (1939) and repeated in John Gillespie Magee, Jr.’s poem “High Flight” (1942), appropriate for this title.

To Touch the Face of God is an examination of the symbolism and conflicts of manned flight into space, of the “material and spiritual conception of God, heaven and an angelic host.” It delves into the political and religious history in the U.S. at the height of the Cold War and the realization that those “godless Soviets” had penetrated God’s heaven, while introducing a new weapon: the Intercontinental Ballistic Missile, ICBM.

There are, in fact, many questions author Oliver explores in his work, ranging from the individual spirituality and religiosity of the astronauts, to the effects of the race to the moon and advancements in technology on the nation’s religiosity. Were the Mercury, Gemini and Apollo space missions “godly or godless venture[s]?”

Though the book at times reads more like a post-doctoral dissertation than a popular book, Mr. Oliver accomplishes what otherwise would be a very difficult task: an honest examination of the secular and sectarian connections with outer space.

Like other examinations of John F. Kennedy’s September 1962 challenge for an American to step on the moon before the end of the decade, Mr. Oliver provides a solid historical foundation about manned flight and technology, where the latter “may have owed its early development to a belief that increasing the power at man’s hands fulfilled a providential purpose.”

With subheadings like “Christian Cosmography in the Space Age” and “The Epiphanies of the Astronauts” one would initially believe that Mr. Oliver’s purpose was to blindly connect the dots towards the growth of American religiosity (Christian, Eastern, and alternative faiths) and the American and Soviet the space programs.

Mr. Oliver does not spend a great deal of time speaking to the individual beliefs of the American astronauts, especially Jim Irwin, and NASA’s attempts to gain support of the Christian communities during a time of civil unrest and poverty within the U.S, the continued threat of nuclear war, or our continued involvement in Vietnam. It is the strength of the individual spirituality of the astronauts and NASA officials that create the base of the discussion.

The final chapter, “Evil Triumphs When Good Men Do Nothing,” is where the premise of the book fell into place. Here, the controversy of astronauts Frank Borman, Jim Lovell, and Bill Anders reading Genesis 1:1-10 on Christmas Eve as they circled the moon, and the actions, real and perceived, of atheist activist Madalyn Murray O’Hare bring the story together.

The ruling did not sit well with the American Christian public. When O’Hare complained the Apollo 8 biblical readings had been “slandering other religions, slandering those persons who do not accept religion,” the Christian community came to arms. O’Hare’s mail-in campaign to NASA demanding to keep religious readings out of the space program drawing a great political wrath from the religious right is well documented and discussed. It is here Mr. Oliver is able to show the need of the religious community to maintain their spiritual threshold and the power of the various Christian churches to do so. It is here that the reader sees the beginnings of today’s religious right political movement.

The mix of science, religion, and politics come together at the end of the book. Jim Irwin, who had started his own ministry after his career as an astronaut, emphasized in 1972 the political wealth gained by NASA and the space program through the O’Hare controversy, providing NASA the “beneficial public support”—referring to the newly revived energy of American Christian support—it needed at the end of the Apollo program and the move to the space shuttle.

To Touch the Face of God is not a short read and is definitely not a project directly supporting the connection of the growth of the American religious community with the country’s space program. It does, however, support the importance of the strength of individual faith, the power of community, and the American need for both heroes and villains of biblical proportions to change the world.