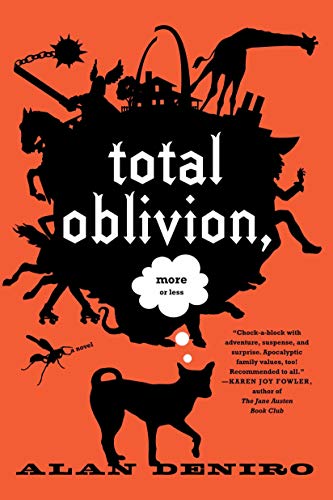 Ballantine Books, November 2009 If you’ve ever wondered what would happen if reality and time sort of collapsed, look no further than Total Oblivion. Told from the point of view of sixteen-year-old Macy, it’s the story of a normal life in a normal family, and how the cracks that already exist in a family are expanded and widened by the extreme weirdness of the Apocalypse coming in the form of a Thracian invasion. Then an Imperial counter-invasion. Then a plague that creates pustules that contain strange things like tiny barking dogs and a woodcut church and a baby that’s growing too fast—not to mention wasps that are attracted to the plague that turn people to flaky parchment when they sting. The invasion pushes the Palmer family from their home and they escape down the Mississippi through lands that used to be familiar American landmarks and keep being strangely changed, expanded, made foreign by war and mist and whatever caused the ancient warriors to invade to begin with. America is gone, and they have to make their way through a world that follows rules they don’t understand and have no framework for, while the invaders take on parts of their now-broken culture. It’s a study in how a world falls apart, all through the eyes of a teenager who seems to be always missing the point or the meaning of what happens. As her family falls apart and goes their separate ways, Macy finds herself alone in an ever-weirdening world. It’s sometimes irritating to wander though continual collapse, but in the last third of the book, all of a sudden the dozen or so threads of the story start to weave together, and the patterns they assemble into aren’t the world that was broken at the beginning of the book, but a new version of the lives they all want to live in a world that cannot be un-changed. It’s endlessly fast, traveling from disaster to revelation to plot twist to new focus—all at breakneck speed. It’s never what you expect it to be, either in events depicted or in character arcs. It’s beautiful at times, more often brutal, strange and wonderfully inventive, and it always feels a little like it’s too big for the frame of the story it’s telling. Macy is immature and a little dense. Her family is strange and far too independent. Side characters come in and leave and are never seen again. Politics happen off-screen and change everything. Intrigue happens, but mostly misses Macy’s attention until it’s too late. The narrative is broken up by the occasional news report, court proceeding, letter to and from people who aren’t involved in the story, or personal story in third person (most is in Macy’s first person) that catches us up on what’s going on with other people outside of Macy’s point of view—and it’s a loose narrative. Messy, even, though that’s somewhat intentional. The storyline eventually comes together, but it never knits up cleanly—which is discussed in the narrative itself—and that can be irritating, but at the end of the book, it’s forgivable. It makes sense. It really is like life, and since life is a little bit like a hit and run, in the context of this weird, odd book, it’s okay. People, if they survive, move on and rebuild and redefine their place in the world, and most of the grand political structures are in the deep background, not having much to do with the people themselves. And since Macy does learn her lesson, and the rest of the family comes back together in the end, all the other weirdness doesn’t matter much when it comes down to it. Unless you really don’t like unusual storytelling. Samantha Holloway is a freelance writer and editor, and is working on her first novel. Her most recent short story is in Fiction International’s FREAK issue and an upcoming anthology, and her academic work has appeared in The Essential Science Fiction Television Reader, and at various conferences.