Too Young to Be Old: How to Stay Vibrant, Visible, and Forever in Blue Jeans: 25 Secrets from TV's Jean Queen 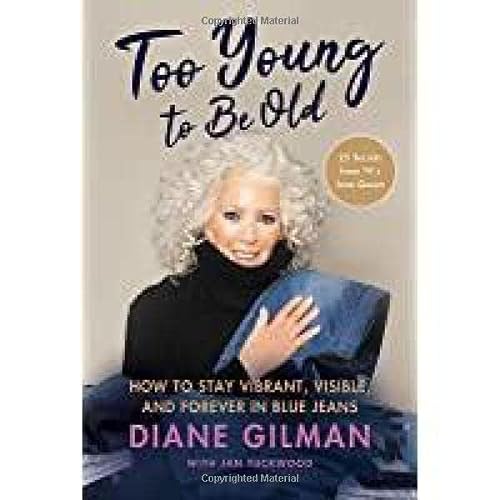 “‘I was born to be a rocker chick, forever in blue jeans.’”

Says Diane Gilman, “I was born to be a rocker chick, forever in blue jeans . . . from my hippie days making jeans for Janis Joplin to my twenty-eight years selling my DG2 line on HSN.”

Her father, Theodore, had been married before, and married Gilman’s mother, Freida—from Maine, in Mexico—where he apparently was able to divorce his first wife, in 1937.

Diane Gilman was born in West Los Angeles in 1945. She claims she’s been a cool girl almost all her life. At seven, she sewed doll clothes from elegant scraps. In the 1960s, she designed jeans for Joplin, and partied with Grace Slick and Jimi Hendrix.

Her father Theodore, a jeweler, molested her until Gilman was a teen. “When my father was done with me, I’d run back to my bedroom, close my eyes . . .” He once threw a knife at her, which she promptly threw back at him, all the while her mother wore blindfolds.

Gilman’s lust for Carnaby Street-couture grew when she started working at a local SOCAL boutique as a teen. “Fashion was my door to freedom . . .” which began at UCLA in 1963. She scored a free flight to London in 1964.

She opened a boutique in LA with friends, selling items they sewed with great textiles. Cher visited.

Gilman made clothes for Janis Joplin, Jimi Hendrix—all the celebs who ever landed in LA in the ’60s. She was busted for drugs and taken to the same jail as the Manson people.

She fled her parents to the Berkeley area, and soon went to New York. After briefly waitressing, she got a job at Bloomingdale’s that led her to her own fashion line, Cabal, in the early 1970s. Gilman schmoozed at Studio 54, “like Oz—if the munchkins had been . . . ingesting psychedelic substances.”

Gilman got a facelift in 1994 and got on HSN, home shopping on TV.

Then, her longtime lover Jim, got prostate cancer, which had metastasized. He died in her arms in 1997. And around that time she faced a serious, 60 lb. weight gain, which she resolved by walking, exercising, and cutting carbs.

She got a new boss at HSN, Mindy Grossman, who inspired Gilman to reach for the stars. By 2012, she had sold five million pairs of jeans. Kudos in Paper magazine read, “In home shopping circles, Diane Gilman is the equivalent of Barbra Streisand . . . an above-the-marquee name . . .”

As of 2022, she’s sold 19 million pairs of jeans—fitting women of all sizes—in 28 years. Gilman gives an excellent behind-the-scenes overview of HSN. About her fame, she says, “It showed up just as the sun of my own life hit late afternoon.”

Then, after only her second mammogram in her seventies, she was diagnosed with bilateral breast cancer. Some readers won’t relate to her discussing, “Long wigs with handmade caps cost around $8,000,” though she could easily afford them, as one would think her health and outcome might be more important.

After successful chemo, Gilman had surgery and reconstruction. Says Gilman, “I’ve found deep satisfaction in designing . . . jeans that give women of every age and size hope and confidence in a pant leg.”

She encourages women to be positive as they age: “Act 3 is the most powerful and enlightened time of our lives.” And toward the end of the book, Gilman talks about many older women who are “fabulous,” including Iris Apfel, Carmen Dell’Orefice, and Joni Mitchell. “Don’t sweat the small stuff,” adds Gilman.

The reader might feel the book might have ended at least 50 pages earlier than the actual 335, as the final 50 pages are filled with fluff, lists, and advice that may not pertain to the reader. Still, it is a colorful trip through recent fashion history.

Diane Gilman’s story is told in short chapters, making it easy to read about the many facets and amazing, unbelievable, and endearing highlights of her life. Too Young to Be Old is a nostalgic walk through the evolution of fashion from the 1960s through the present, loaded with namedropping of California counterculture celebs. This reviewer, who studied fashion in the early ’70s, was hooked!