Too Fat to Go to the Moon: Gay Sasquatch Saved My Life 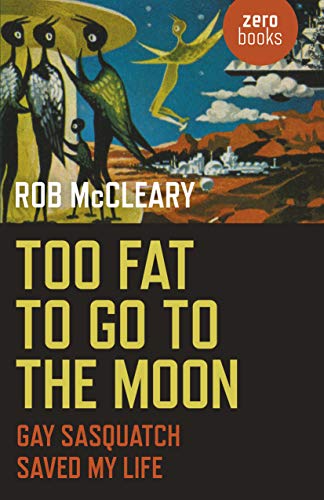 “Too Fat to Go to the Moon mainly distinguishes itself by its lack of charm, insight, plot, humanity, or willingness to engage on any real intellectual level. It’s a crude and juvenile book, loaded with racist, ableist, and homophobic humor . . .”

Between its quirky title and absurdist premise, Too Fat to Go to the Moon: Gay Sasquatch Saved My Life seems extremely promising. The cover blurb promises, “In 2030 America is broke. When NASA is forced to raffle off a trip to outer space . . . the ticket is won by a guy from Cleveland who is so fat he can’t make it out of his own house.” It seems an excellent beginning to a satirical novel.

That detail, and others featured in the blurb, though, are background mentions in the book. The novel is instead the ostensible memoir/autobiography of Stanley Astor Jazzhands Superstar Galaxy Gramophone Van Kruup III, King of New York and President of the Remaining States of America, written as he sits alone in a devastated Albany, New York, awaiting the end of the world. He begins, “This is a story about America, and jerking off, not necessarily in that order.” It’s told in fragments, each rarely more than a page in length, and divided, cheekily, by centered dollar signs: “$$$.”

Jonathan Lethem suggested that “if you wrote ‘Nixon in Space’ [McCleary’s one short story] or its equivalent fifty times you’d be George Saunders or Donald Bartheleme.” Lethem comfortably asserts that Too Fat to Go to the Moon is “just as good.” Lethem is too optimistic about the repetitive power of obscenity and absurdity. They’re funny in small doses but agonizing when repeated ad nauseum.

There is, indeed, a Gay Sasquatch. But that’s the gag. He’s a Sasquatch. Who is gay. There’s something profoundly juvenile, even hate-filled about this kind of joke. It’s adolescent at best, profoundly dated, and followed by the announcement that though Gay Sasquatch is married to an orangutan, in an echo of the same-sex marriage debate suggestion that homosexuality and bestiality are essentially equivalent. There’s potential here for satire, but the satire would need to be thoughtful, complex, and carefully considered. McCleary, if satire is his intention, needs to review the nature of satire. His current conception appears to be that satire occurs spontaneously when one says the most offensive thing one can imagine, and then asserts that the assertion is satirical, and therefore not only acceptable but actually clever.

Most often, McCleary’s jokes are based in long, repeated phrases that become more repugnant with each repetition. From “Itsy-Bitsy Bourbon Pissing FDR” to “the land of Meth Fueled Homicidal Sodomites” to “the naked, pickled Pawhtnatawahta woman,” the humanity and possibilities behind the prank phrases are never revealed. (The attempt at commentary on the genocide of America’s indigenous people is clearly present but falls flat in that it relies solely on a century of racist, tired “Indian” tropes.)

Too Fat to Go to the Moon mainly distinguishes itself by its lack of charm, insight, plot, humanity, or willingness to engage on any real intellectual level. It’s a crude and juvenile book, loaded with racist, ableist, and homophobic humor, which never rises to the level of a novel, and should perhaps have been abandoned as a failed experiment in faked outsider art.