Too Big to Fail: The Inside Story of How Wall Street and Washington Fought to Save the Financial System---and Themselves 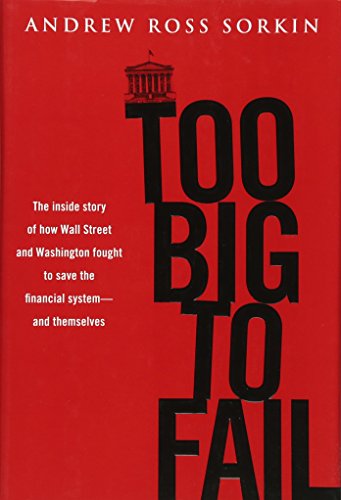 Andrew Ross Sorkin has written what many consider the definitive book on both Lehman Brothers and the financial crisis. Without question, Sorkin benefited from unique access to the highest level executives on Wall Street as well as the most senior government officials. Working with a team of researchers he extracted more detail about the nearly 24/7 interaction that both preceded Lehman's bankruptcy and continued as the government and Wall Street grappled to stabilize a financial system that may well have been on the brink of collapse. As a reader of this mostly captivating book one feels like a fly on the wall amongst the titans of Wall Street as they breathlessly struggled to, as Sorkin seems to see it, save the world from financial ruin. There is no book that comes close to Sorkin's in achieving this intimate sensibility, nor is there likely to be another.

Sorkin, in a note at the start of his tome, describes the vast number of sources interviewed for hundreds of hours. He also tells us that the identities of those interviewed and the attribution of information on his pages is to be obscured by his journalist's cloak. This is not surprising. Wall Street professionals speaking openly about what Sorkin chronicles is at the very least quite rare. Moreover, many of the key players, particularly at Lehman, can ill afford to compromise themselves in light of the lawsuits in which they are embroiled. The access and detail here is so great that it must have created envious Pavlovian drool in the mouths of many a business journalist. Still, this comprehensive blanket of anonymity frees Sorkin to write what he will with little risk that his narrative can be discredited.

As a result, one is left wondering how much of this tale is entirely accurate and how much is essentially an educated guess. At the very least it is clear that the book is suffused with poetic license. In one sense this a particular strength of the book. It reads like a novel. Still, one cannot seriously entertain the notion that those interviewed by Sorkin and his team described each sigh, each smile, the placing of one's head in one's hands. This creates uncertainty as to exactly how much license was taken. In short, how accurate is this book?

As a former Lehmanite, I can vouch for the accuracy of much that I read. I also noted a smattering of errors. None of these were significant enough to cause particular annoyance or substantially undermine the veracity of his account -- yet they are there. Perhaps most amusing was a sentence where Sorkin refers to a female Lehman executive with a unisex name as a male.

There has been much talk—in my opinion, overdone—that Dick Fuld was hermetically sealed off from the happenings at Lehman. In a sense, Sorkin has, however, placed himself in a similar dome of silence with the mighty few who by definition are not fully aware of much that occurs on the floors below their executive offices. As a result, his information is sourced from many public figures managing public perceptions of themselves, who must therefore speak with a personal agenda that is anything but objective., This undoubtedly compromises the absolute accuracy of the account. For instance, there were management shuffles at Lehman that were engineered for very specific reasons. Sorkin says little about this, though indeed some of the changes, particularly in risk management, facilitated the destruction of Lehman's balance sheet.

In the end, the book is a must read for anyone who works on or watches Wall Street, or for that matter any reader who enjoys a good yarn in the tradition of Barbarians at the Gate. The writing is solid and the story compelling. Indeed, despite the above flaw, it is impossible to read the book without being seduced by its play-by-play breathless narrative.

That the book at its core is dramatized nonfiction is precisely what makes it irresistible. Only after around four hundred of the more than five hundred pages did I begin to grow weary of the incessant dialogue among the various power brokers and falling giants. Despite the occasional inaccuracy, as well as limited interpretation of events and only fleeting insight, it is certain that much new information is also revealed. Absent Sorkin’s effort, perhaps much of this would have been buried forever. In the end, Too Big to Fail is an extraordinary read. It is not the truest book on the financial crisis due to the flaws noted. But the absolute volume of information, and the fluid and entertaining fashion in which it has been assembled makes Too Big to Fail an informatrve and entertaining ride for anyone who cares to know as much as possible about the financial crisis—if only we knew what was accurate and what was imagined or spun.

If it's absolute truth you are after, this will be difficult to extract from any single volume, but I do recommend that you supplement Too Big to Fail with another read that is more analytical and insightful. There are an ever increasing number of books about the financial crisis from which to choose.