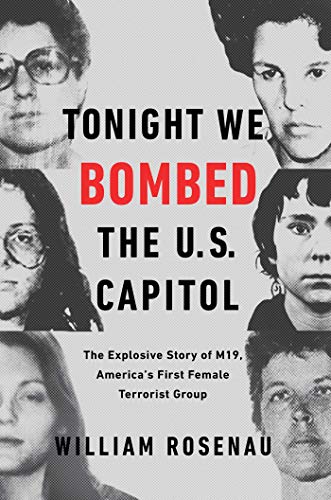 “Written by counterterrorism expert and former RAND political scientist William Rosenau, Tonight We Bombed the U.S. Capitol tells the compelling and sobering tale of M19 with hardly a hint of the sensationalism its bombastic title promises.”

The advance press on Tonight We Bombed the U.S. Capitol, a revealing new history of an all-female American domestic terrorist cell called M19, reads like lurid true crime tabloid fare. It promises “explosive hidden history” and invites readers to “MEET THE WOMEN OF M19” who once designed and planted a bomb that blew a “fifteen-foot-wide crater” in the north wing of the U.S. Capitol in 1983.

Written by counterterrorism expert and former RAND political scientist William Rosenau, Tonight We Bombed the U.S. Capitol tells the compelling and sobering tale of M19 with hardly a hint of the sensationalism its bombastic title promises.

As such, it provides a well-balanced, clear-eyed view of an underground organization “totally and profoundly influenced by the revolutionary movements of the sixties and seventies” that formed in 1978 to wage war on U.S. imperialism and racism. Before disbanding in the mid-’80s with the capture and prosecution of most of its key members, M19 was the last such group left standing.

M19 took its name from May 19th, the shared birthday of Malcolm X and Ho Chi Minh. The group grew out of the same ideological ferment, anger, and frustration with the failure of non-violent movements to bring about revolutionary change as the better-known Weather Underground, but with some noteworthy differences. In Rosenau’s portrayal, M19 shared some common lineage with Weatherman cells but eschewed not only Weatherman’s stifling male dominance, but also much of the dilettantish adventurism that proved its undoing.

Emerging as an independent organization shortly after Weatherman’s demise, “May 19th was unique—unlike any other American terrorist group before or since,” Rosenau writes. “May 19th was created and led by women. Women picked the targets, women did the planning, and women made and planted the bombs. They’d created a new sisterhood of the bomb and gun.”

M19 consisted principally of six white women inspired by radical black liberation movements: Donna Borup, Marilyn Buck, Judy Clark, Betty Ann Duke, Linda Sue Evans, and Laura Jane Whitehorn. In clipped, economical prose, Rosenau presents the backstory of each woman, fleshing out the worlds they came from, the seeds of their radicalization, and the paths they traveled that brought them together and to M19.

Of particular interest in M19’s early history is the women’s ill-fated affiliation with a male-run, mostly African American organization called the Family. At its peak, the Family orchestrated the operation that broke Black Liberation Army radical Assata Shakur out of prison in 1979. But it quickly devolved into a garden-variety criminal operation focused primarily on planning armed robberies to fund the cocaine habits of the group’s male leaders.

M19’s break with the Family allowed the group to refocus on its political mission. In Reagan era of the 1980s, that meant bombing political targets to protest police brutality against people of color at home, and U.S. aggression against liberation movements abroad in Central America, the Middle East, and Africa.

In describing M19’s origins, Rosenau also states the purpose of the book, rooted in his deep background in counterterrorism work: “The women of May 19th were part of a generation of violent left-wing militancy in the United States that stretched from the 1960s into the 1980s,” he writes. “Uncovering the history of the group can help us understand how and why a tiny band of Americans decided to wage a war against their own country. That history isn’t likely to produce ‘tidy’ lessons about how such terrorism can be prevented, but it can help us understand the circumstances and contexts from which homegrown domestic terror emerged, and make us better prepared to grapple with the violent political extremism that remains part of the American landscape.”

At the book’s conclusion, Rosenau draws convincing parallels between organized left-wing political violence perpetrated by M19 and others in the 1960s-’80s, and the current-day “lone-wolf wolfpack” of White Power terrorists reenergized by the election of Barack Obama and resurgent under Donald Trump—ironically, ideological allies of the same “white supremacist pigs” M19 took aim at in its heyday.

Rosenau’s subject matter expertise serves him well in his descriptions of how M19 successfully went underground (through various hide-in-plain-sight methods of establishing viable false identities), chose its targets, planned its attacks, and eventually undermined its own efforts by leaving a paper trail with clues to the organization’s personnel and plans. These slip-ups led to its eventual decline and the capture of most of its members. He also does an effective job of describing how isolated the group eventually became, leaving its actual prospects strikingly at odds with its grand revolutionary aims.

It’s particularly in the tone that Rosenau strikes in his narrative that Tonight We Bombed the U.S. Capitol stands in stark contrast to Bryan Burrough’s widely read Days of Rage (2015). Burrough’s bracing and often darkly humorous work narrates the history of the Weather Underground, the Symbionese Liberation Army, the Black Liberation Army, and other 1970s radical organizations in lavish detail. Burrough consistently goes for the dramatic jugular that Rosenau studiously avoids.

Both authors discuss several of the same events, beginning with the splintering of SDS and including the Family/M19-coordinated prison break of Assata Shakur. Although neither author romanticizes terrorism or its perpetrators, clear differences remain in their treatments of their subjects. Consider Burrough’s characterization of M19: “A number of the May 19 women felt the seductive lure of the underground.”

That type of language rarely if ever appears in Rosenau’s book. It’s to Rosenau’s credit that his account of deeply sobering political violence proves consistently compelling without ever striving to titillate, exploit, or entertain.