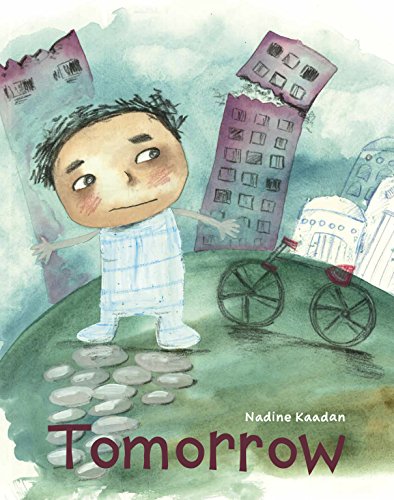 Children’s literature does not shy away from life in its many manifestations. There are picture books about loss, illness, death, and metaphorical stories about good and evil. William Steig often writes about abandonment and separation. On Amazon, title upon title by first rate authors exist on these subjects.

Now, from Syrian author/artist Nadine Kaadan, comes Tomorrow, a picture book about living in war torn Damascus. Yazan, a young boy, yearns to go out to play. His parents make excuses but he notices his mother, who formerly spent happy hours painting, is now only glued to the television set. He tries to amuse himself, but he’s bored, bored, bored, and finally, against the house rules, he takes his shiny bike out into the streets. They’re empty. Nothing is as it was. No children are around and even the spice trolley has disappeared.

When his parents retrieve their boy, they are gentle. What can parents do to bring back Yazan’s childhood, yet keep him safe? Kaadan’s solution is for mama to paint the park he so loves onto the very walls of his house. But as she does this, she tells him straight up: “You can’t go to the park right now. People are fighting in the streets and going out of the house is too dangerous.”

Because she can’t allow Yazan to leave again, she’s forced to break the spell of innocence. Despite the colorful upbeat park painting, this is a sad story and it has to be. Books like this are, unfortunately, needed. We are living in the age of trauma. Parents have a harder job than ever, in dangerous Syria or dangerous anywhere.

This title is published by Lantana, an English company. American publishers could take a page from their playbook. The awful truth is that too many little ones have anxieties that need a mirror. Perhaps childhood itself is undergoing a change.

The author takes a straightforward approach to a distressing situation. The question remains, How young is too young to face reality when that reality is threatening?