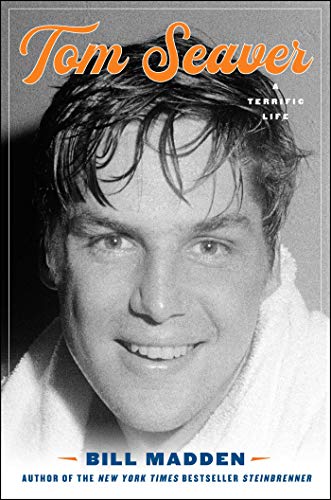 “a smorgasbord of baseball delights . . .”

In baseball, as in all sports, there are in each generation a handful of players who stand out above all others. In his two decades of dominating hitters, Tom Seaver was one of those transcendent generational figures. From the late 1960s to the mid-1980s, Tom Seaver was a dominant pitcher. Although most identified with the New York Mets, Tom Terrific pitched for four different teams, but it was with the Mets that he first attained elite status.

In Tom Seaver: A Terrific Life, Bill Madden has captured much of Seaver’s greatness and a good number of his human qualities. This is Madden’s eighth baseball book and third biography, including profiles of George Steinbrenner, Lou Piniella, and Don Zimmer. Madden has covered major league baseball for the New York Daily News for 40 years. This book, in part, came out of many hours of interviews with Tom and Nancy Seaver that Madden conducted for a documentary on the great pitcher.

The narrative is filled with quotes and insights from the Seaver family and close friends and from Tom’s classmates and teammates in Fresno and New York. All of this material is nicely woven around the highlights and lowlights of Seaver’s baseball career.

Madden recounts all of Seaver’s great achievements, both individual and team. At the top of the list are his near unanimous election to the Baseball Hall of Fame; followed by his World Series performances, a no-hitter and near perfect game; and the Mets, Reds, and White Sox winning seasons.

Perhaps most important is the transformation of attitude by the Mets’ players from acceptance of the charming designation of “loveable losers” to that of a confident and tenacious culture of winning. Once the players accepted this role with Seaver’s lead, the fans followed.

One of the strongest points of Madden’s work is his portrayal of the relationship between Tom and Nancy Seaver and the primary importance of Nancy Seaver in the maturation of Tom Seaver from boy to man. Madden also captures Seaver’s relationship with his father, his brothers, and his daughters.

As in most sports books, there are many accounts of big games and critical and decisive parts of winning seasons. Madden has a great eye for just the right quote, from the right source, to illuminate the personality and character of the Hall of Fame pitcher.

The relationship between Tom Seaver and the New York Mets did not always run smoothly. On the upside is his relationship with Gil Hodges as Mets manager, which approached adoration. On the downside is his chilly relationship with Met’s chairman and minority owner, M. Donald Grant. It was a relationship that was exacerbated by Grant’s use of sportswriter Dick Young to belittle Seaver’s talent.

At certain points Madden delves into Seaver’s personality and reveals bits and pieces of its complexity. This is the one element of Madden’s work that comes up short. He hints at Tom Seaver’s less pleasant characteristics. It seems clear that Madden could have taken this much deeper and revealed a more complete and complex picture of the man. Tom Seaver, like of us, was a slightly flawed human being, yet someone who could serve as a role model for many members of the human family.

This is an interesting book with much to commend it. For the Mets fans it offers a smorgasbord of baseball delights, and for the rest of us a good read about a great pitcher and a man who understood himself and had confidence in his abilities which he developed to the fullest.

Madden closes Tom Seaver’s story by chronicling Seaver’s successful venture at his California vineyard to which he brought the same meticulous attention that he had applied to his pitching. Near the end the Hall of Fame pitcher withdrew from public life as he fell victim to dementia. Tom Seaver died August 31, 2020, just as Bill Madden was finishing this book.