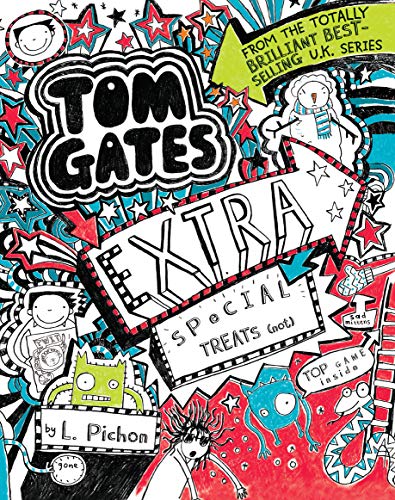 Tom Gates: Extra Special Treats (Not) is part diary, part doodles, the sweet story of a boy who wants desperately to get a “star pupil” badge. For 200 pages, we read about Tom sneaking treats, bugging his older sister Delia, playing games with his grandparents (“the Fossils,” as he calls them), and fighting with his nemesis, star pupil Marcus. Nothing unusual or particularly interesting happens beyond a snow day sending students home and a 50th anniversary party for the Fossils, but the lively mix of words and pictures keeps the reader engaged, feeling invited into the life of an ordinary kid.

Tom is funny in a dry way: “Mom hides vegetables that I don't like in pies. She thinks I won't notice. I always do.” Asides in parenthesis express a lot of the humor, giving Tom a distinctive voice, something that matters a lot for this age group. Talking about his uncle and aunt, forced to stay with Tom's family when a winter storm cuts their power, he notices: “How is it possible that you can be asleep and snore that LOUDLY? I thought Mom and Dad were bad. (They were quite bad.).”

A lot of the charm for American readers comes from the British slang (yes, the author, L. Pichon, lives in England). These terms aren't translated from British to American within the book, so a glossary in the back obligingly informs us that “rubbish” means garbage, “biscuits” mean cookies, and “dodgy” means odd. Some random games also follow the story, including a drawn board for Snakes and Ladders, the game Tom plays with his grandfather.

The Tom Gates series is popular in the author's home country and is sure to find a wide following on this side of the Atlantic as well. There's a broad hunger for graphic novels and for visual storytelling in a longer format, and this book is a chocolatey raisin treat, just like the ones Tom sneaks at the beginning of the book.