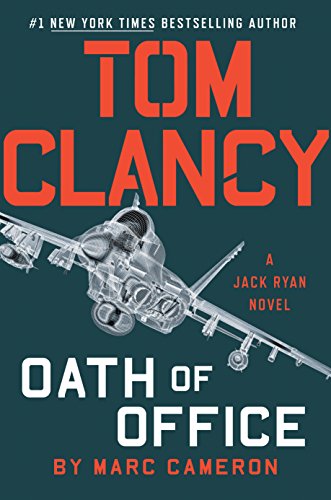 “It’s pure entertainment that will keep you turning the pages until the blood’s all spilled, the bad guys are no more, and there’s nothing much left to say other than, Yes, Oath of Office does indeed tell a darned good story.”

The author of such blockbuster military thrillers as The Hunt for Red October (1984), Patriot Games (1987), and Clear and Present Danger (1989), Tom Clancy passed away in 2013. His legacy continues, however, with successive novels by authors writing for the Tom Clancy franchise. Marc Cameron now brings us Tom Clancy Oath of Office, the 21st thriller featuring Jack Ryan.

Protests have broken out in Iran, and while U.S. leaders call for support of the Iranian rebels, President Jack Ryan is skeptical. Meanwhile, two Russian nuclear missiles have been stolen, and Jack Ryan Jr. is abducted while tracking them down. John Clark and the rest of the Campus team must quickly mobilize to find the missiles and rescue Jack Jr. before it’s too late.

Oath of Office is Cameron’s second Tom Clancy novel. The author of seven Jericho Quinn titles under his own name, Cameron put in 29 years in law enforcement as a uniformed police officer, SWAT officer, detective, and U.S. marshal. He has a black belt in jujitsu, he teaches defensive tactics, and he speaks Japanese. Judging from his bio, his personal life experience would seem to have been lifted straight out of one of his novels.

If we set aside all the Tom Clancy baggage, though, and close our eyes for a moment to the rather intimidating makeup of our current author, the question that must be addressed is rather simple: Does Oath of Office tell a good story?

Consider how it begins. In the first 100 pages there are 25 shifts in point of view among 17 different characters. Seventeen characters! Twenty-five narrative breaks, an average of one every four pages! Even while this sort of storytelling method is common to military and techno-thrillers, 17 separate points of view in the first 20% of the story strikes one as head-hopping to an unacceptable extreme.

Before you know it, you’re 300 pages into the thing and they’re still a-turning as you devour the action. John Clark, Ding Chavez, Lisanne Robertson, and the rest of the Campus crew keep things moving briskly, while Erik Dovzhenko of the Russian SVR, the equivalent of the CIA, intrigues. Interlaced with the action on the ground is the suspense generated in the White House, where Jack Sr. grinds through a bird’s-eye view of events while dealing with his own political crises.

Granted, on Marc Cameron’s watch Jack Ryan makes a president not suited for all palates. While dealing with an embassy crisis in Cameroon, Ryan “wanted to send in a battalion of Marines and bayonet every last son of a bitch that got in their way.” Tsk tsk. Who voted for this guy, again?

For his part, John Clark quotes Frederick Forsythe when he tells Jack Jr.: “I want to go out with a bullet in my chest and blood in my mouth, and a gun in my hand.” The warrior’s creed, according to Tom Clancy and company.

It’s that kind of story, written for the hawks in the crowd who expect their military thrillers to be fast, hard, and tough. Tom Clancy Oath of Office is all of that, and a surprisingly good read along the way.

It’s pure entertainment that will keep you turning the pages until the blood’s all spilled, the bad guys are no more, and there’s nothing much left to say other than, Yes, Oath of Office does indeed tell a darned good story.