Times of Security: Ethnographies of Fear, Protest and the Future (Routledge Studies in Anthropology) 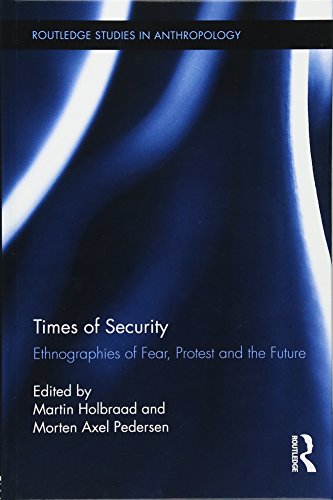 Times of Security is an edited collection of essays that seeks to refine and redefine the study and understanding of security (general human wellbeing) in a complex geopolitical world that renders this a topic of great immediacy for policy and practice the global political arena.

That the book was not titled “Times of Insecurity” is telling and foreshadows an emphasis on social stability rather than one underscoring the inherent volatility, disjuncture, and discontinuity that others might find characteristic of contemporary global politics.

But by juxtaposing time and security, Mr. Holbraad and Mr. Pedersen have the opportunity to bring a new and fresh European sensibility to the study of security, one to challenge the statistics baked into the concept and animate it with the unpredictable flows of events, people, and power.

Indeed they promise to provide a perspective that gets away from the particulars of individual experience (what recently has tended to be the anthropological approach), as well as the obsession of political science / international relations with the sovereignty, stability, and boundedness of the nation-state.

Their approach ends up wedding the fine-grained ethnography of anthropology with a variant of the old IR emphasis on social equilibrium and the pursuit of statics (as framed by the Copenhagen School’s “securitization theory”).

Mr. Holbraad and Mr. Pedersen begin by an adroit and creative reading of their theoretically conservative anthropological ancestors as having centered their analytics on issues of personal and social security, and the mechanisms through which that comes about. This is, indeed, a unique reading of scholars, such as Bronislaw Malinowski and A.R. Radcliffe-Brown, who shaped a field of study in the early 20th century. For them stability and equilibrium were the natural order of individual and society.

Mr. Holbraad and Mr. Pedersen reflect this sentiment toward statics. For example, they define security as “a set of discourses and practices concerned with a given social collective’s reproduction over time or as “the optimal point or balance . . . between contrasting individual wills and collective goals.”

Therein lies the concern that a viable 21st century accounting of geopolitics, with its often disruptive and unpredictable affects, cannot center on notions of stability, the state, or an imagined space of idealized security. Many in the volume reflect this discomfort as they challenge the assumptions of securitization.

What follows in the volume’s essays is a focus on collective responses to insecurity, as well as the constellation of discourses and practices, within the apparatus of the nation-state: Denmark, Bolivia, Peru, Israel, Serbia, and North Korea. Two marvelously rich cases highlight the poles within which the remaining ethnographies range.

In Bolivia, Helene Risør explores how residents of a poor peri-urban community—affectively abandoned by the state—attempt to divine criminal presence and activity, thus finding some level of control under conditions where there is no system of present, let alone reliable or trustworthy, state security.

In North Korea, Heonik Kwon explores the militarization of the mind in a place that is in a perpetual hyper-state of emergency. All the cases presented are interesting and insightful examples of groups postured against or in alignment with state apparatuses. The state, however, remains the master trope.

State-centrism, however, presents a real challenge and limitation for any contemporary geopolitical analysis. We need look no further than the recent wave of Arab Spring uprisings; cartel shadow governments in parts of Latin America; or the new “loose networks” of international organized crime.

All are competing forms of governance to the nation-state model and operate outside of it, within in, at the margins, and often without regard to it. All suggest a geopolitical world characterized by unpredictability, discontinuity, conflict, and transformation (to what is unclear).

Traditional and neo-IR approach can be ultimately traced back to the Treaty of Westphalia (Germany, 1648) that established the western concept of the nation-state: sovereign, independent, and territorially bounded.

It is a decontextualized and ahistorical Westphalia that today informs much political thought, diplomatic relations, and military action. It is also, at root, the cause of our bankruptcy of language and analytical perspective about how to address and respond to a world that defies the neat boundaries and logics of the state.

A remapping of the geopolitical world will find all manner of non-state (but alternately governed) spaces that have posed incredible challenges to the nation-state model. Recent military action by the U.S. in Afghanistan and Iraq underscores this only too well as Washington has desperately sought to understand cloud-like, non-state entities that are uninterested in territorial boundaries, diplomatic discussions, or the “rules of the game.”

Consider the complexity of a geopolitical landscape that defies the analytical framework and language of the nation-state:

All these labels have a certain imprecision but together drive home the point that the 21st century geopolitical terrain is complex, thoroughly messy, and often operates within, at the margins of, and outside any comfortable nation-state framework.

Contemporary conceptualizations of security must account for these alternative political spaces and the challenge to understand security in an age when the nation-state has many competitors to governance, control, and authority. Therein, notions of security may fall more along the lines of a sliding scale of endemic threat for many people throughout the world.

Anthropology has a long history of working in interstitial spaces between and outside of the reach of nation-states. As the volume’s afterword by Steffen Jensen and Finn Stepputat underscores, the discipline is uniquely situated to engage in the analysis of these geopolitical complexities as they play out in specific places and times of insecurity and human suffering as it is embodied, discussed, practiced, and contested in inherently unstable fields of political process.