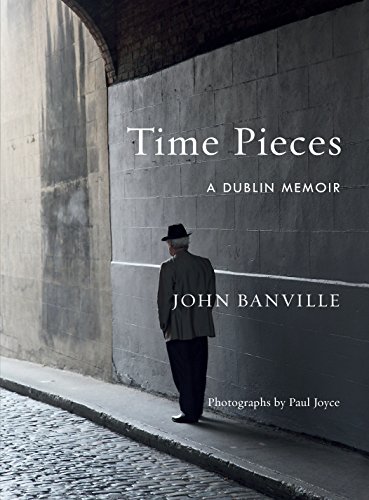 “Fascinating and atmospheric, the narrative is complimented with beautifully illustrated images . . . For anyone who loves Dublin . . .”

“Certain moments in certain places, apparently insignificant, imprint themselves on the memory with improbable vividness and clarity . . . so vivid are they, the suspicion arises that one’s fancy must have made them up: that one must, in a word, have imagined the.”

Born and bred in Wexford, a train ride away from Dublin, John Banville as a child saw the city as a place of enchantment. It was first a birthday treat, the world his beloved, eccentric aunt inhabited.

When he came of age and took up residence there, the city was a frequent backdrop for his dissatisfactions as a young writer. When he lived outside Ireland, the city remained alive and indelible in his memory. In a once grand but now dilapidated flat in Upper Mount Street, he wrote and dreamed and hoped. Returning to live in Ireland, he found Dublin to be as fascinating—albeit for different reasons—as it had been to his seven-year-old self.

“Dublin was for me what Moscow was for Irina in Chekhov’s Three Sisters, a place of magical promise towards which my starved young soul endlessly yearned. That the city itself, the real Dublin, was in those poverty-stricken 1950s, mostly a grey and graceless place did not mar my dream of it . . .”

Banville is an award winning Irish novelist and screenwriter. He has penned 16 novels that include The Book of Evidence (1989) and The Sea (2005), which won the Man Booker Prize. In Time Pieces: A Dublin Memoir, he turns introspective and reflects on his cherished memories of his adopted hometown. In it he alternates between monologues of his own past, and present-day historical explorations of the city.

“O time, O tempora, what places we have been to—where will you take me yet?”

One of the great but elusive metaphysical questions of history has been the nature and substance of time. In the very first chapter, Banville writes, “the past is where we live, while the past is where we dream. Yet if it is a dream, it is substantial, and sustaining. The past buoys us up, a tethered and ever-expanding hot-air balloon.”

This provides, in many ways, the rhetorical theme of the book that combines memoir and guidebook with social observation. As a result, Banville takes us on a swift journey through his life and Dublin both, providing just enough detail to make it enlightening, but not so much that it gets tedious and dull.

The writing itself is amusing and entertaining with plenty of colorful references to other Irish writers and poets: “For good or ill, as a writer I am and always have been most concerned not with what people do—that, as Joyce might say, with typical Joycean disdain, can be left to the journalists—but with what they are.”

Overall, Time Pieces is a quick and well-written read that pays tribute to a humbler and more influential place and time for the writer. Fascinating and atmospheric, the narrative is complimented with beautifully illustrated images by award winning photographer Paul Joyce. For anyone who loves Dublin, every page of this memoir will be a delight and for those not acquainted with the city, it will bring better understanding into what makes it so charming and distinctive.