The Tiger's Prey: A Novel of Adventure 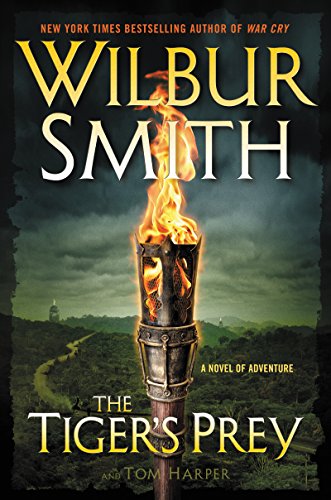 Even the greatest novelists eventually reach an advanced age. One of three things will happen: they stop writing (sad), they die (very sad), or they take on an author partner who can collaborate in their work. Happily for all fans of Wilbur Smith, he has chosen the third alternative, and with Tom Parker continues to produce novels of the highest quality.

The Tiger’s Prey furthers the tradition of taut adventure novels set against an exotic, constantly changing locale. As one of the truly great storytellers of our time, Smith has for over 55 years enchanted incalculable numbers of readers throughout the world. With over 125 million volumes in print and with works translated into 26 languages, his 30 novels stand alone as evidence of his prolific talent.

He has written six novels about Egypt and 14 stand-alone thrillers, but he is perhaps best known for his sagas of the Courtney and Ballantyne families. Akin to what James Michener does in a single volume, Smith traces multiple generations within a family over several books.

He cleverly intertwines the decisions, triumphs, failures, and tragedies of earlier generations into the stories of the current progeny. In this the 16th book of the Courtney series, the reader follows Tom Courtney, one of four sons of master mariner Hal Courtney. Filled with nonstop action, heroism, love, betrayal, jealousy, imprisonment, and a smattering of sex and pregnancy, the book continues to follow the style that Smith has made so popular.

One of Smith’s trademarks is writing each book as a self-contained volume. The reader is not required to know the series from the beginning. Nonetheless, the author cleverly recounts snippets of previous books and the adventurous episodes of previous generations. For those who have read the earlier books these references bring back images from the past stories but not enough to spoil a reader’s enjoyment of previous volumes should they be read out of sequence.

The Tiger’s Prey begins aboard an overburdened merchant ship beset by pirates along a trading route in the Indian Ocean. By chance and from another vessel, Tom and his crew see the tragedy about to take place and seek to intervene. After a tense struggle and eventual victory, Courtney earns the loyalty of the ship’s captain, which is subsequently essential when Tom himself is then threatened with death and overwhelming destruction.

Other important characters include Tom’s brother Guy Courtney estranged from Tom by a family murder, Guy’s stepson Christopher who has been badly treated by Guy, Tom’s brother Dorian long thought dead, and Tom’s nephew Francis. When Francis’ father dies and their estate is in bankruptcy, Francis sets out to find and kill Tom for the same family crime.

Many of the picturesque, frontier and recently settled locations on the Indian subcontinent are lushly described and sure to stimulate the reader’s imagination to another time and place. Queens, traders, and smarmy entrepreneurs all play a part in the tale of Tom and wife Sarah, Christopher and Francis.

As a sworn enemy of the East India Trading Company which does not appreciate freelance traders such as Tom Courtney, he must assiduously evade contact with Guy who is the Company’s chief representative in Asia, and would kill Tom on sight. Family secrets, misconceptions and the loyalty of bloodlines all come together as the story unfolds.

As with Smith’s earlier novels, this book has resolution but leaves several tantalizing situations open. Surely there is a 17th book in the future. Whether curled up in an easy chair in front of a fire on a cold Sunday afternoon or in a lounge chair on a beach, this book will quickly and repeatedly draw the reader into exotic places, earlier times and swashbuckling action.

Whether this is your first taste of Wilbur Smith’s talent or if you have read many of his volumes, get a copy of The Tiger’s Prey and settle in for high adventure.

Christopher M. Doran is the author of Africa Lite? Boomers in Botswana.