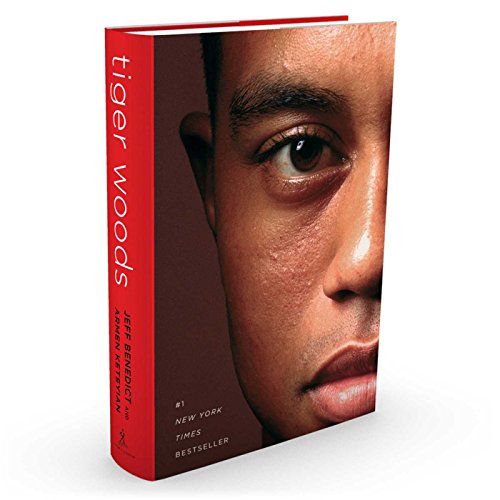 “If you have any interest in Tiger Woods, golf, or the culture of celebrity and heroism, this volume will be worth your while.”

His father called him “The Chosen One,” telling a reporter that Tiger would “do more than any other man in history to change the course of humanity.” Earl Woods might also have claimed that he would do more than anyone else to mold, shape, and form his son. Along with Tilda Woods, Tiger’s parents sculpted this extraordinary golfer inside a protective bubble. They, along with a gaggle of agents and marketing gurus developed the myth that surrounded Tiger Woods and that became the core of his essence.

Tiger Woods was a golf phenomenon at the age of two, dazzled the golf community as a teen, became the top amateur golfer in America before he left Stanford, and exploded upon the professional golf scene where his dominance awed and intimidated his rivals. He transformed the way the game was played, necessitated the redesign of golf courses, and was on his way to setting career standards that would surpass all others who ever played the game.

He was the best known athlete in the world, was greatly admired for his pristine public image, and at times looked remarkably like someone “chosen” for greatness. Then seemingly at the peak of his career, it all came crashing down around him.

In this fascinating and highly readable new biography, Jeff Benedict and Armen Keteyian examine the life and times of Tiger Woods from childhood to fame and then to the implosion of his world. The central questions are simple. How did it happen? How did this shooting star rise to the top of the athletic and celebrity world? And how did it all come crashing down around him? The answers are anything but simple.

Americans have always loved stories about the rise of heroes and celebrities and seem to feed on their fall from grace, relishing both developments. They are equally drawn to the public confessional and redemption of sinners. Perhaps no one has played this scenario out as spectacularly as Tiger Woods.

Benedict and Keteyian exam the childhood and education of Tiger Woods with a very keen eye for the forces that shaped him. Tiger’s parents treated him as special and indulged him completely. At the same time Earl Woods prepared his son for a life in public by developing a tough emotional shell around him. One could argue, and indeed the authors seem to argue, that Tiger was a victim of a form of child abuse that left him emotionally underdeveloped and something close to a complete narcissist.

Beneath the public perception of the ideal American hero, Tiger Woods led a life of loneliness, lacking in social skills, incapable of normal interaction with those who surrounded him, including those who served him. He demanded total loyalty requiring those who worked for him to sign non-disclosure agreements. Privacy was one of his highest values. In many ways he depended on others to organize his life and to isolate him from outside forces, while never acknowledging any debt to them. A simple “thank you” seemed out of his reach.

The personal toughness, developed by his father, left Tiger Woods unable to respond to the physical messages of pain being sent by his body as it broke down. His refusal to acknowledge that pain led to a further breakdown of his body, more pain, surgeries, and ultimately an abuse of painkillers and other drugs.

The most remarkable example of this toughness came when he won the 2008 U.S Open Championship at Torre Pines. It required an extra 18 holes on Monday after he tied Rocco Mediate with some spectacular golf on the 18th hole on Sunday. Tiger played the entire tournament with a ruptured ACL and two stress fractures in his tibia.

Woods’ relationship with his wife Elin and their subsequent marriage seemed to humanize Woods and enhanced his position as the perfect hero, with an ideal wife and a perfect marriage. This would all crumble with the passage of time as he came to indulge himself in the pleasures of sex, which ultimately was diagnosed as an addiction. This led to the disintegration of his marriage and family life in a cesspool of lies and infidelity. All of this was enabled by the massive amounts of money he had accrued from golf and the massive endorsement contracts, which defy imagination.

The rise and fall are put under a microscope by Benedict and Keteyian with the assistance of a dogged research staff, an immense amount of digging into all the available public records, and a large number of interviews. Social and psychological analysis and theories are brought to bear, and in the end Tiger Woods’ life comes into some focus.

The researcher and biographer are only as good and as complete as their sources. In this case the quality and quantity of both are impressive and convincing. No doubt there will be objections, especially from Tiger Woods and those who remain in his inner circle. They will no doubt have their say. Tiger Woods may decide to tell his version and perception of events at some point. If he does, his autobiography will be measured against Benedict and Keteyian’s impressive piece of work.

For now, Benedict and Keteyian have produced a volume rich in its analysis and exposition of a life of fame and tragedy. It is, in turn, depressing and exhilarating, while endlessly fascinating. If you have any interest in Tiger Woods, golf, or the culture of celebrity and heroism, this volume will be worth your while.