Tiger in the Sea: The Ditching of Flying Tiger 923 and the Desperate Struggle for Survival 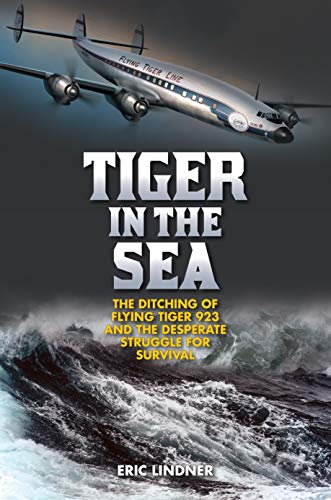 “Tiger in the Sea is ultimately an inspiring, uplifting book, with multiple heroes.”

Flying Tiger Line flight 923 left Gander, Newfoundland, on a stormy, moonless night in September 1962, carrying mostly military personnel to new assignments in Germany. The airliner, a beat-up four-engine Lockheed Super Constellation carrying 68 passengers, was an anachronistic prop plane in an era of jets. But the military chose flight contractors based at least partly on price, and Flying Tiger got the job done at a competitive rate. Replacing planes regularly wasn’t in the budget, even though two other Super Constellations had recently crashed.

Eric Lindner’s Tiger in the Sea is a minute look at what happened when three of the plane’s engines burst into flames and quit. Constellations can fly with just two operating engines, but not with one. Two minutes after that third engine quit, Captain John Murray gave the order to ditch at sea. Flight safety cards, even today, carry calm-sounding instructions for disembarking after a water landing, with passengers in inflated and illuminated life vests sliding down safely into rubber rafts. That’s not what happened with 923.

The impact hitting the cold waters of the North Atlantic near the coast of Ireland sheared off the left wing and took many of the right-side seats out of their anchorings. Flight attendants, particularly their leader, Carol Gould, tried to maintain order, but instead there was chaos, as passengers were tossed on top of each other. Some were badly injured, others only scratched. With 10 minutes before the plane sank, scared people clawed for the exits. The four life rafts were scattered, and the large auxiliary raft was launched—upside down.

But as Lindner details in meticulous prose, passengers managed to climb aboard that inverted raft and pull others up, too. Yes, there were a few who said the boat was overloaded and the remaining floaters should be left where they were, but they were ignored. Soon the raft held 50, but because it was upside down there was no access to the flares, food, and water it carried. The storm raged on.

There was a dangerous lack of light on board. The captain had a flashlight, but no one else did. The weather reduced visibility, but rescue planes miraculously saw the flashlight and located the raft. Now it was up to the Celerina, a Swiss freighter and the closest ship, to reach the survivors before they froze to death or drowned. It was hours away.

The rescue happens halfway through the book. Some 48 people survived, and 28 died. The reader might wonder, where does the book go from here? But Lindner still has plenty of material. As in Sully, the Tom Hanks vehicle telling the story of Chesley “Sully” Sullenberger and his 2009 landing on New York’s East River, there’s a gripping aftermath involving National Transportation Safety Board hearings, wounded passengers and crew, plus the lingering effects of PTSD. The author follows all these strands very effectively.

The flight of 923 is told with a novelist’s skill, and the reader will feel like a fellow passenger in one of the empty seats. He’s in the cockpit with the flight crew, in the galley with the flight attendants as they go over ditching instructions and fight panic, and among the passengers—many of whom are given carefully sketched biographies.

Once the survivors are plucked from the sea, the narrative becomes more conventional reportage, but doesn’t suffer for it. If you’re tempted to skip these passages, just don’t. You’ll learn a lot about how people are affected by plane crashes, how air mishaps are investigated, and how safety is handled. (Or not; one manufacturer is quoted as saying lost aircraft are good for business.) And, in a first-person narrative, you’ll discover how poorly records are kept in the National Archives.

The book cycles gracefully to a where-are-they-now. Captain Murray, whose cool head undoubtedly saved the lives of many passengers, died in the water only four years later—in a swimming accident. Carol Gould, still alive to be interviewed at 80, tells Lindner, “Don’t sweat the small stuff. I didn’t die that night in the North Atlantic. I could have, easily. I should have . . . Instead, I married the man of my dreams . . . I’ve made a lot of new friends. I’ve been blessed.” Now she rescues stray animals.

Lindner’s last book was about his work as a hospice volunteer. He has a special connection to this one—he’s married to Captain Murray’s daughter. Although there was tragedy that night in 1962, Tiger in the Sea is ultimately an inspiring, uplifting book, with multiple heroes. Many books could be written about similar plane crashes. Be thankful that this one was written.