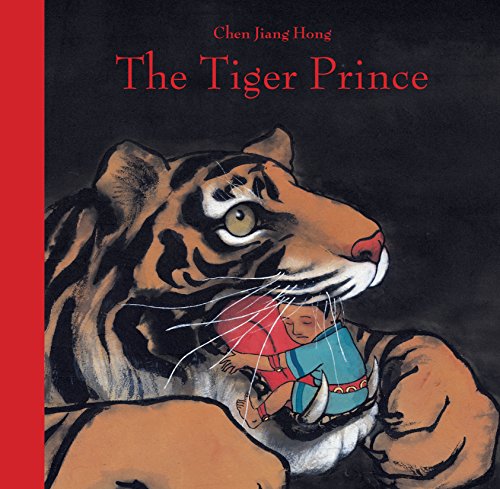 With exquisite ink and oil illustrations and simple prose, artist and author Chen Jian Hong tells the ancient Chinese tale about a man-eating tigress who takes vengeance on humans because her cubs were killed by hunters. The king’s first response is to send out an army to kill the rogue tiger, but before giving the command, he visits a seer.

Her advice is unexpected. “‘Don’t send out the army, Your Majesty,’ she says. ‘This will make the Tigress even more fearsome. Only one thing can appease her in her fury. You must give her your son, Wen.’” The seer promises that no harm will come to the boy.

Reluctantly the king gives up his only son to the tiger. “She takes Wen in her mouth the way she used to take her cubs, and suddenly, all of her anger vanishes.”

Wen grows up with the Tigress, who “teaches him everything a little tiger needs to know. The seasons pass and Wen grows up.”

Years later, the king and queen are still grieving for their son. At last they can stand it no longer; the king sends his army to find the boy. True to the heavy handed nature of most armies, the soldiers fan out lighting fires throughout the forest. Eventually Wen and his Tigress mother are trapped with their back to the fires and the soldiers before them.

The tale ends with redemption. Wen recognizes his human mother, yet still loves the Tigress who raised him. He explains, “You are my two mothers, the one from the forest and the one from the palace. Now I have to return to the palace to know what princes know. But I will come back often, because I don’t want to forget what tigers know.”

Chen Jian Hong was inspired to write and illustrate the story when he saw a late Shang dynasty bronze dynasty bronze vessel in the Cernuschi Museum in Paris. It depicts a scene from the Chinese folktale of a child named Ziwen who as a baby was taken in by a tigress.

Tigers are an important element in Chinese iconology. They are the emblem of dignity, ferocity, sternness, courage, and the harmony of the opposites. A tiger embodies the spirit and drive to achieve and make progress and represents the masculine principle in nature. The four stripes on a tiger’s forehead form the character Wang (王), which means king, indicating that the tiger is king of all the animals.

In this story, by giving the human prince to the Tigress, peace is made between the two kingdoms of human and animal in the same way that monarchies solidify their alliances with other nations by marrying the royal children into the other royal families, creating a family connection.

In the end, this beautiful book is about diplomacy, and how risk and sacrifice can lead to redemption and mutual understanding.