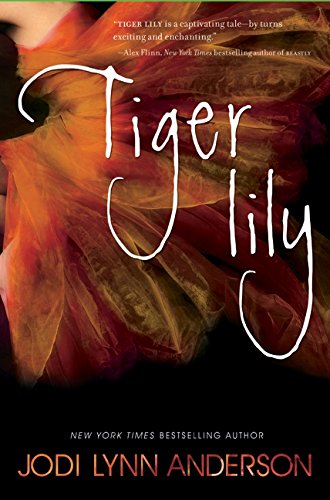 “Tiger Lily is rich and charming, a little quirky, a lot unexpected, and beautifully tragic.”

Peter Pan is a story oft reimagined, but Tiger Lily has a charm all its own.

Tiger Lily is told from the point of view of the title character—here, an outcast of the Sky Eater tribe, not a princess at all—and through the first hand account of Tinker Bell, who can read memories and emotions and so knows what everyone is feeling and some of what they’re thinking.

As a narrative, these POVs are sometimes a little tricky: Tinker Bell can’t be everywhere at once, there are places where sometimes she seems to disappear, others where she gets in the way—but generally it is a charming perspective. She is in love with Peter as much as Tiger Lily, both of them are entirely citizens of their respective worlds, and neither has a framework for understanding Wendy when she makes her appearance toward the end of the book.

For most of the story, this is the tale of how outcast and cursed Tiger Lily finds and falls in love with Peter, and he with her, while trying to understand her place among her own people.

But as Tiger Lily unfolds, it complicates in interesting and often entertaining ways. She saves a man shipwrecked on their shores thus confirming her cursed status among the tribe, but also saves the life of the man whose preaching almost tears her community apart.

She spares Smee’s life, which leads to him tracking her to where the Lost Boys live. Breaking a promise to Peter leads to breaking both their hearts, and opens the door for Wendy—and ultimately Peter’s decision to grow up.

The world portrayed is wilderness in the old storybook mode: Neverland lives by its own laws of the jungle—here they are as dangerous as beautiful—and follows a logic all its own. The characters are well drawn and emotionally honest; the landscape is varied and interesting, and the differences from the source material are unexpected and numerous. Particularly fascinating are the Sky Eaters.

As a love story, Tiger Lily is as passionate and wild as its characters, but as anyone who has read Peter Pan or seen any of its adaptations knows, ultimately unsuccessful. It reads, by the end, more as a tragedy—regardless of their happy when the events of the book are long over.

But as a story of first love, the one you remember as you live the rest of your life, it’s epic and affecting, successful in the manner of most mythologies: This is how it occurred, magic and all; you can believe if you wish.

It was a smart move on Ms. Anderson’s part to make this a prequel and give Tiger Lily her own story—one that’s fresh, strange, and dangerous. The wilderness of Neverland is lush and beautiful, but edged everywhere with menace; and the people who live there are just as ragged-edged and wild.

Tiger Lily is rich and charming, a little quirky, a lot unexpected, and beautifully tragic. It’s a quick, exciting read, and the happy endings are honest and believable in the context of the story we’re told. It is a book as reserved and pointed as its main character, but it lacks nothing in the way of drama. Well worth the read.