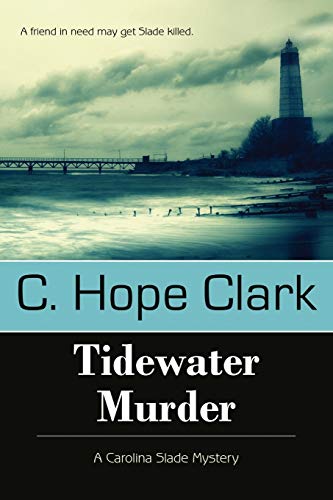 “Few current series work as well as this one.”

The crime-solving plot of this novel hooks straight into a nail-biting ride through corruption and human slavery—in, of all places, the tomato-farming business of South Carolina.

What makes the story really stick is its lead character, Carolina Slade. Unlike the average American modern woman, Slade goes by her surname only; one of her many unconventional traits.

Slade is a complex, compelling character who can be described in shorthand as “a piece of work” and more fully as a bull in a china shop with an acrobatic ability to land on her feet.

She is brilliant and obtuse, heroic and humble, honorable and sneaky, professional and reckless, altruistic and selfish, loyal and fickle, trustworthy and unreliable, rational and irrational, and all things in between.

One would expect a woman like this to be a maddening coworker with relationship issues; and one would be right—as Slade’s new lover quickly learns.

Special Agent Wayne Fargo, like Slade, works as an investigator for the U.S. Department of Agriculture. “Folks like me,” Slade explains, “solved the minor cases and ran interference for political bosses, advising them when to request the gun-totin’ agents”—like Wayne—“for the more critical crap.”

In Tidewater Murder, Slade’s nose for trouble puts her into gun totin’ territory when she should be sticking with paperwork. But she pushes the boundaries for her longtime friend and mentor, Savannah Conroy, who has been set up to take the fall for a fraudulent loan exposed in an audit by Slade’s co-worker, Monroe.

Slade should recuse herself for conflict of interest, but she charges in anyway, leaving behind a new home still unpacked and children still troubled from losing their father in the first volume of the series, Lowcountry Bribe.

In that book, the author relentlessly tightened the screws on her heroine. Here she does it again, putting Slade further into conflict of interest with Wayne as well as with Monroe. Originally Monroe was a platonic comrade. But when the going gets tough, he reveals himself as a competitor for her heart.

This combines with the tomato-farm problem into a painfully intense escalation of small into huge, involving dead bodies, betrayals, and danger to Slade and her loved ones.

The reader sweats along with Slade in the Southern heat, sharing her stress from banging her head against so many obstacles. With the exception of fleeting warm moments with her men and family, everyone she has to deal with is uncooperative, unpleasant, or just plain evil. The case deteriorates at an exponential rate.

It’s impossible to imagine how she’s going to survive it all, much less come out on top (even though she did so in the first book, which contained all the same elements). Slade takes so many risks to self and career, how can she get away with it?

One-liners salted through the story capture her character as much as any description of her actions:

“Blonde, quiet, and sweet. Everything I wasn’t.”

“My conscience told me to shut up, but my pride kept stepping in.”

“I wasn’t a natural follower. Daddy reared me to lead or get out of the way.”

“Real relationships were supposed to be give and take. I didn’t know how to do that anymore.”

Indeed. Even her suitors don’t trust her—and rightly so, because she keeps operating behind their backs and disrespecting their positions, putting them in the hot seat and creating unnecessary strife. Wayne, in particular, puts his issues plainly on the table yet she resents him for it, at the same time taking his rebuke on the chin and acknowledging that he’s right—then disregarding (or misinterpreting) him again.

Even the reader wants to smack her sometimes, wondering why she keeps provoking her loved ones when they consistently show support. Her need to succeed, to fight for justice, impels her beyond sensibility, with heart enough to take her all the way to good resolutions. So we end up loving—and forgiving—her, and her risks earn reward.

This second book in the series provides enough backstory to remind fans of the first book and give newcomers context. The writing hints at second-novel blues at the start, feeling a little wobbly and forced with descriptions a shade too colorful, scenes a tad too long, dialogue a bit too snappy. Soon the story takes over, though, and everything comes together, getting hotter and stronger as the tale unwinds.

Few current series work as well as this one. It offers a fresh environment, an emotionally gripping lead character, and clever, carefully worked-out crime. There’s no guessing what will come next either with Slade herself or her next adventure. Stay tuned; volume three is in the works.