Ticket Masters: The Rise of the Concert Industry and How the Public Got Scalped 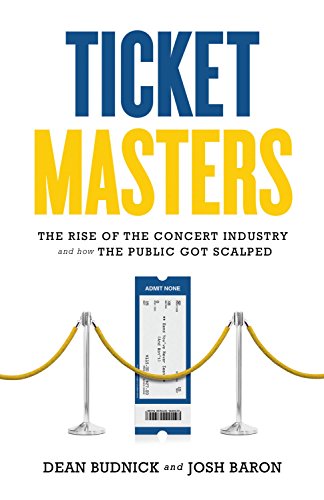 “Simply put, avid concertgoers will likely enjoy this book or throw up reading it—perhaps both.”

From 1996–2003, the average concert ticket price rose 82%. The book Ticket Masters explores the how and why way back when from the days of one of the original promoters, Bill Graham, and his early relationship with BASS, a forerunner in the computer ticketing business, to the modern day alliance between Live Nation and Ticketmaster.

Ticket Masters describes how computerized tickets grew from a regional to a national enterprise; it delves into how the Rolling Stones’ split from Graham exemplified the natural shift in how tours were marketed. It also chronicles the business tactics of Ticketmaster’s Fred Rosen—who, to his detractors is portrayed as the consummate bully— and his company’s rise to prominence over main rival Ticketron, and the subsequent dominance that it retains to this day.

Along the way, Ticket Masters goes into great detail about the major developments that impacted the concert industry. Examples include how Frank Barselona, a pioneer of rock concert tours, influenced a change from a focus on hit songs to a focus on live performances. In the 1970s, large, outdoor amphitheaters were built specifically for concerts. Fifteen existed in 1980. Between that time and 1998, when SFX, a company headed by Bob Sillerman, completed a flurry of promoter acquisitions, including large ones such as Cellar Door, approximately 29 additional amphitheaters opened across the country.

The Telecommunications Act of 1996 and the deregulation that followed led to many corporate mergers and further fueled the changing landscape. Sillerman’s synergistic approach started marketing products based on audience data, allowing for greater guarantees to artists.

If you never knew how a concert came to fruition, authors Budnick and Baron boil it down this way: Artists hired managers to negotiate deals with promoters. Promoters in turn negotiated deals with venues, and venues in turn signed contracts with ticketing agencies. Companies like SFX took out the middleman. Artists would not agree to lower guarantees, and, in fact could get more, leaving all of the other players scrambling to get theirs.

While service fees and Ticketmaster are easily vilified, a multitude of factors contributed to the rise in ticket prices. As the other players gave up less off the top, auxiliary income from concessions, parking, etc., became the key source of revenue for them.

Readers get the scoop on just how the Grateful Dead managed to cut a deal for a larger percentage of direct sales. We learn about the impact of the secondary market and companies such as StubHub, which have grown so quickly and are now so commonplace that it’s hard to remember the days that these outlets were frowned upon. The book also explains why some of the best tickets for a show are never even available for purchase. The Pearl Jam standoff and congressional hearings are discussed in detail with some surprising facts that make Pearl Jam seem less than angelic, as is often believed to be the case.

Simply put, avid concertgoers will likely enjoy this book or throw up reading it—perhaps both. It’s hard to believe that original computerized ticket systems began in 1972 and were once written in BASIC programming language. It’s even harder to believe that this reviewer had great seats for the 1984 Springsteen Born in the USA tour—for $18.

If only someone could explain this facility fee thing. . . .

Dave Moyer is the author of Life and Life Only. He is also a former drummer and veteran concert attendee who has seen a wide variety of artists, including Bob Dylan—30 times (but he’s not obsessed or anything).