Tibetan Peach Pie: A True Account of an Imaginative Life 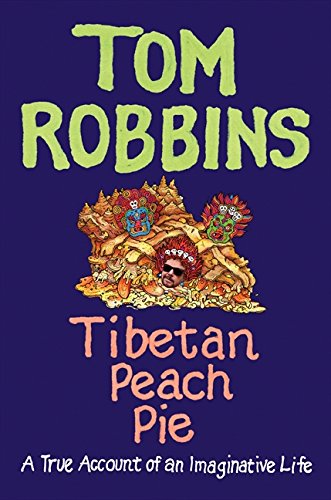 “Required reading for those who like their literature oozing with imagery, Tibetan Peach Pie is as engrossing as it is eccentric—just like the author’s life. His powers of observation and his eye for the offbeat, not to mention his penchant for the truly peculiar, remain undimmed.”

With an appetite for enchantment honed in the hillbilly setting of rural 1930s Appalachia where, as a boy he roamed free, Tom Robbins has always managed to imbue his novels with a captivating otherness.

Interacting with a motley crew of “squirrel hunters, rabbit trappers, berry pickers, banjo pickers, moonshiners, tramps, real Gypsies, snake handlers, mule-back preachers (like my grandpa), eccentric characters with names such as Pink Baldwin and Junebug Tate, and perhaps most influential, bib-overalled raconteurs, many of whom spun stories as effortlessly and expertly as they spit tobacco juice,” the author was bound to see the world through different eyes.

Add to that an adult life that’s included a flirtation with the circus, learning to love kimchi (breath-fouling fermented cabbage) with a Korean bargirl, an ongoing affair with Japan, experiments with sixties’ psychedelia, and a moment as the Unabomber suspect, and it’s almost inevitable he’d end up weaving such wondrous tales as Still Life with Woodpecker, Jitterbug Perfume, Half Asleep in Frog Pajamas, and Even Cowgirls Get the Blues.

Now the eccentric wordsmith turns his offbeat talent to nonfiction with a book about his unconventional life. But this isn’t an autobiography, he says: “God forbid! . . . only authors who are household names should write autobiographies, and not only is my name infrequently tumbled in the lapidary of public consciousness, those rare homes in which it’s spoken with any regularity are likely under police surveillance.”

He’s not really happy for Tibetan Peach Pie to be described as memoir, either, “although it waddles and quacks enough like a memoir to be mistaken for one if the light isn’t right.”

What it is, he reckons, is a sustained narrative of absolutely true stories, arranged in more or less chronological order, although he insists he’s never kept a journal in his life and concedes “. . . some folks who were involved at the time may recall them a bit differently.”

Whatever it is, one thing’s for certain: little Tommy Rotten, as his mother was wont to call him, was destined to become a writer. Almost as soon as he started talking in complete sentences, he announced to his parents that was his intention. Too impatient to wait until he could spell or even scrawl words on paper, aged five he dictated full-scale stories to his besotted mother, whom he turned, he says, into his private secretary.

“I’d call on Mother to stop whatever she was doing and take dictation.”

A frustrated writer herself, she was a willing accomplice, although her tendency to occasionally change the wording to “improve” her precocious son’s style saw him throwing tantrums until his original words were reinstated.

And he was right to be miffed, because if there’s one thing Tom Robbins has in abundance, it’s an unerring way with words.

Tibetan Peach Pie, he promises up front, provides “intimate verbal snapshots of, among other settings, Appalachia during the Great Depression, the West Coast during the sixties’ psychedelic revolution, the studios and bedrooms of Bohemian America before technology voted privacy out of office, Timbuktu before Islam fanatics crashed the party, international roving before ‘homeland security’ threw a wet blanket over travel, and New York publishing before electrons intervened on behalf of the trees.”

Required reading for those who like their literature oozing with imagery, Tibetan Peach Pie is as engrossing as it is eccentric—just like the author’s life. His powers of observation and his eye for the offbeat, not to mention his penchant for the truly peculiar, remain undimmed.

Feel the sizzle with such evocations as: “Summer lay on the rural Southeast like a sheet of flypaper. Men, dogs, farm animals, commerce, time itself, seemed stuck to the page with a yellowish narcotic glue.”

As he once explained to his one-time editor Alan Rinzler: “Metaphors have the capacity to heat up a scene and eternalize an image, to lift a line of prose out of the mundane mire of mere fictional reportage and lodge it in the luminous honeycomb of the collective psyche.”