Thus Spoke the Plant: A Remarkable Journey of Groundbreaking Scientific Discoveries and Personal Encounters with Plants 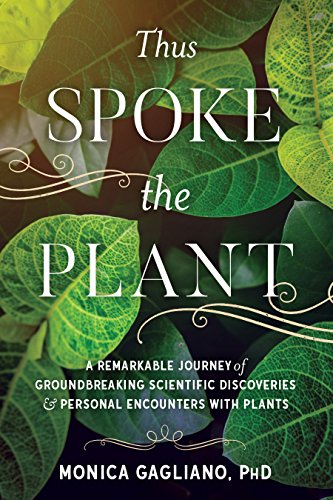 “In flowing prose and pointed language, Thus Spoke the Plant makes the case that we’re not alone in our thoughts or even in the capacity to think and communicate; in a time of escalating atomization and endemic alienation, this might be just the medicine some people need.”

Reading Monica Gagliano’s slim volume Thus Spoke the Plant makes one feel a bit like David Duchovny’s character (Fox Mulder) from the X-Files, who famously had a poster on his office wall saying, “I Want to Believe.” Mulder’s open-mindedness was regarding alien life, whereas this book is about making contact with beings much closer to home—what we might call intraterrestrial life. And not to be alarmist, but (borrowing a phrase from the movie Poltergeist): “They’re here . . .”

Specifically, the book is about plants and their ability to communicate, not just metaphorically (as in, “the color of those flowers really spoke to me”) but literally (as in, “that flower really spoke to me”). In this sense, Thus Spoke the Plant continues in the vein of earlier controversial books such as The Secret Life of Plants, which asserted that plants possess an interior dimension of emotion and thought. In Gagliano’s book—which takes pains to remind us that it is grounded in scientific inquiry—the concept is taken further to indicate that plants not only have an interior life, but are capable of exteriorizing it as well.

Part memoir, part research monograph, part self-help exposition, and part sociopolitical analysis, this book can be read on many different yet connected levels. For this reader it was most impactful as a critique of the limits of pure reason as the primary (or even only) method of understanding and constructing the world around us, given the obvious repercussions of technocratic rationality (even for all of its ostensible virtues and promises) on display through the mounting crises facing humankind right now.

Beyond this, the book’s personal narrative of discovery and humility is replete with inspirational moments and flowery prose (pun intended), yielding a heady brew of altered perspectives and psychedelic ruminations—accruing to something like a “shamanic phytobiography” in the spirit of Carlos Castaneda’s The Teachings of Don Juan from the late 1960s. In Gagliano’s case, not only is she initiated into mind-opening rituals that inform her work (reminiscent of Aldous Huxley’s The Doors of Perception, among other landmark texts), but it is the plants themselves who are the teachers.

Just as the famous play Inherit the Wind asked “Does a sponge think?” and with due regard to fictional characters such as Dr. Doolittle who can speak to animals in their own language, Thus Spoke the Plant presents a worldview in which knowledge comes from many sources, ranging from dreams and visions to chance and spontaneity. It is, at root, a critique of mainstream science for its dominant mindset of instrumentalism, even as the work still steeps itself in the methods of experimentation and replicability (requisites of academic acceptability) by building on earlier research in areas such as bioacoustics.

The basic argument is worth unpacking. If you think about it, people talk to all sorts of things without knowing for sure whether they can understand or respond: pets, deities, avatars, objects, insects (“shoo fly!”), and more. If we’re thinking about what it takes to achieve consciousness (which we might define as being self-aware, in the sense of being aware of one’s awareness), then it’s not entirely clear if all of us would always fit that definition.

More to the point, and less sardonically, we may well be coping with this question very soon when it comes to machines and artificial intelligences in our midst. If we can suspend our disbelief in that realm—perhaps in the near future coming to view machines as “alive” and someday even rights-bearing—then maybe seeing plants as conscious beings shouldn’t be that far of a stretch. If the test of consciousness is whether something looks or acts human, then we might just be confusing the packaging for the product.

There are three potential levels to consider here. First is the essential question of whether plants can communicate with their environment. On this front, at least, we might agree without much debate that plants do receive information from the world around them and adapt accordingly. Whether this is by instinct or will isn’t the issue, since we might ask the same thing about animals—and indeed, ourselves.

The second question is whether plants can communicate with one another. There is emerging evidence that this may actually be the case, with plants actively sharing information via airborne chemicals, underground networks of roots and fungi, and perhaps even through sounds not discernible to human ears. As a 2014 article in The Scientist titled “Plant Talk” observed, plant communication can be “subtle and sophisticated.” Anyone who’s ever weeded a garden at least can attest to the concerted power of root networks!

Even accepting the first two premises, the question remains whether plants can communicate directly with us (thus obviating the need for having a spokesperson like Dr. Suess’s The Lorax speak for them). How we answer this depends on the definition of communication, whose language is being used, and whether any such exchanges can be translated and understood. If we stick solely to the realm of linguistic exchange then plants would seem to be ruled out—but again, that same bar might apply to animals and even some humans as well. If communication is more than this, then it’s an open question.

Indeed, in strictly human terms we know that communication indeed is about much more than words; it includes body language, pheromones, intuition, and more. Some of this is intentional, whereas other aspects are more autonomic—for instance, in the ways that eye movements or heart rate can indicate veracity beyond what a person is saying. There’s a lot of subjectivity in this as well, with meaning being left to the mind of the receiver to discern and, in some cases, to translate into actionable intelligence.

Reading Monica Gagliano’s new book through an impartial lens can be a profound experience, even as some may pillory it as pseudoscience. To keep these streams from crossing, this could have been two separate texts: one a journey of self-actualization and spiritual discovery, and the other a rigorous scientific explication of observable phenomena and testable hypotheses. Doing both at once runs the risk of conflating two discourses that don’t often intersect—which isn’t to say that they shouldn’t, but simply that the dissonance may alienate some readers.

Nonetheless, in flowing prose and pointed language, Thus Spoke the Plant makes a compelling case that we’re not alone in our thoughts or even in the capacity to think and communicate; in a time of escalating atomization and endemic alienation, this might be just the medicine some people need. As the book’s closing passage optimistically asserts, “stories are a learning tool for the soul.” Maybe we just need to listen to them.

Randall Amster, JD, PhD, is Director of the Program on Justice and Peace Studies and Environmental Studies programs at Georgetown University. He teaches and publishes widely on subjects including peacebuilding and nonviolence, social and environmental justice, political theory and movements, and the impacts of emerging technologies. His books include Peace Ecology, Anarchism Today, Lost in Space: The Criminalization, Globalization, and Urban Ecology of Homelessness; and the co-edited volume Exploring the Power of Nonviolence: Peace, Politics, and Practice.