Through the Evil Days: A Clare Fergusson/Russ Van Alstyne Mystery 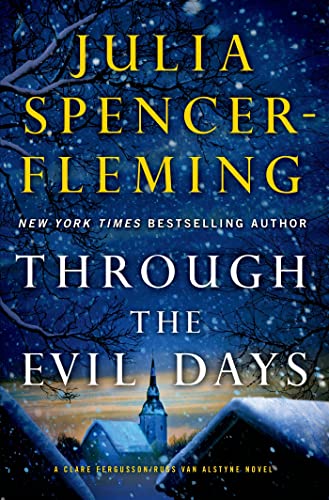 It’s hard to believe that there is somewhere in New York state more remote that Millers Kill, the small Adirondack town where Police Chief Russ Van Alstyne has lived all his life. But there is. And Russ thinks this even more inaccessible lakeside house with no plumbing or heating is a perfect spot for his January honeymoon. He has recently married Episcopal priest Claire Fergusson, now five months pregnant. What a romantic son-of-a-gun.

Clare’s seen worse. She is just coming off an 18-month tour of duty in Iraq. She’s trying to kick an alcohol and pills addiction due to her PTSD. She discovers there is something worse than flying a helicopter in sandstorm—ice fishing.

The main issue the author examines in this outing, the eighth in the series is the importance of communication skills in a partnership. Not being truthful with your partner is a surefire way for the relationship to fail.

In addition to the miles-from-anywhere scenario, Clare and Russ are keeping secrets. Before they leave, both face the possibility that their jobs may be in jeopardy, but for the sake of the honeymoon, neither tells the other. The other looming issue is that Russ doesn’t want to talk about the baby. Before the marriage they agreed on no kids, and Russ feels betrayed by the pregnancy. But he won’t or can’t talk about it.

Also before they leave, there is a home fire that kills an elderly couple who have just taken in a foster child recovering from a liver transplantation. The child is kidnapped, but without her meds she only has a week to live. The reason for the operation is that the meth-head mother had a car accident while she was high.

Julia Spencer-Fleming likes to crank up the tension and then keep cranking it up. It’s not just arson, but two dead bodies. Not just a missing child but one who will die without her medication. Not just a bad ice storm but the worst ice storm of the century. She is a fine writer and doesn’t need to gild the lily; the attempts at mounting tension feel both overwrought and formulaic. The issues of a missing child and bad weather are serious, and by adding mishaps galore, the reader loses sight of the human element.

Trust your readers, Julia. They will love Russ and Clare’s efforts to tend to town and flock no matter the weather or the bad guys.