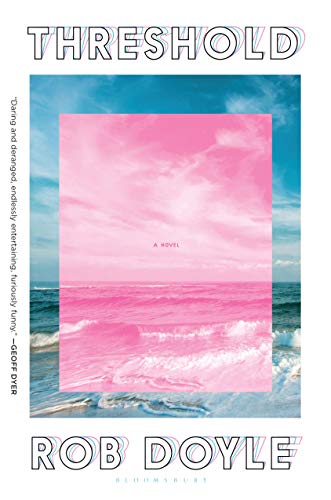 “Rob Doyle’s writing leaves us with—'the sense, euphoric and terrifying, that everything was possible again.’”

Rob Doyle, the author of the stunning debut novel Here are the Young Men and the provocative story collection This is the Ritual, is following in the footsteps of his countryman James Joyce by refusing to repeat himself and by pushing his genius beyond ordinary boundaries.

The publisher and some of Doyle’s readers are calling Threshold a novel. Lisa McInerney describes Doyle’s narrative as “one of those novels where underlining notable lines would be a very bad idea, as you’d absolutely mangle the paper.” Teddy Wayne calls it Doyle’s “portrait of the artist as a youngish man.” Geoff Dyer wonders “how much truth can one mind (or novel) bear?” But Chris Powers comes closest to an adequate classifying of this ineffable narrative: “somewhere between novel, essay, collection, report, travelogue and confession.” Tim O’Brien produced a perfect example of autofiction in The Things They Carried—perfect because the aesthetic confusion between novel and memoir had an organic connection to the main theme of the book— the delicate line between what O’Brien called happening truth and story truth.  Autofiction for its own sake seems coy and depthless. Neither of those two words apply to Doyle.  He is simply suis generis.

Whatever we decide to call Threshold, the book is funny and scary and profoundly compelling—more so if it doesn’t hide behind the gossamer veil of autofiction. In his adventures over the years in Paris and Berlin, Sicily and Spain, Thailand and Ireland, Doyle takes us with him as he chases the ghosts of Roberto Bolano or Georges Bataille, as he roams through art galleries and exhibitions, and as he experiments with a cornucopia of alcohol and drugs, everything from magic mushrooms that grow wild in Phoenix Park in Dublin to DMT, a tryptamine cousin to LSD, and seroquel, marijuana, MDMA, ketamine, and more, so much more. Doyle’s girlfriends and liaisons make a longer list than the pharmaceuticals. Such a tale might seem sordid, but because Doyle writes with an unnerving candor and humor, it ends up feeling like collaboration among Kafka, Camus, and Mark Twain.

Doyle brings himself and the reader into a variety of uncomfortable liminal spaces, shining a light on depression, suicidal impulses, and the sort of existential emptiness that that may haunt any thinking person in the 21st century.  But no matter how dark Doyle’s thoughts become or how perilous his behavior, he is always brutally honest, funny, and self-deprecating.

For instance, in describing his venturing into a Dublin Buddhist Centre in pursuit of a yoga practice that might calm him down, he says, “I took further courses (yoga turned out not to be my thing—it required effort, whereas meditation involved literally sitting there doing nothing.” He found himself good at doing nothing.

And he found drugs a compatible escape, too. In a houseboat in Kashmir, he says, “I imagined I was conducting important research at the limits of consciousness, but I see now I was just getting fucked up on a boat.”

And he figures out why suicide isn’t for him: “There was only one way I would have the balls to kill myself and that was by shooting myself in the skull. That seemed by far the best way of doing it: quick, loud, bloody and—hopefully—painless. All of this was fanciful, though. I could not shoot my skull because I didn’t live in a country where I could acquire a gun. The only country I knew where I’d be able to buy a gun was America, and I could never live there again. I would rather kill myself.”

The ultimate threshold that Doyle brings us to in Threshold is the reflexive, self-referential story itself: “my life was the research for the book I was writing about my life, which was many books, would justify that life.” So, like some 21st century Hemingway with an Irish accent, Doyle is living it up to write it down.

As readers we watch him and listen to him, wide-eyed, holding our breath, with alternate looks of horror and amusement on our faces. And the reader gets implicated in other ways—Doyle talks to us directly in italicized intercalary chapters. We become part of the story, and the questions that Rob Doyle asks himself, the same questions that Kierkegaard and Camus and Sartre asked, are our questions as well. Does anything matter? Toward the end of the book, one of Doyle’s friends provides a possible answer: “It’s much scarier to think that everything matters, every little thing is of the utmost consequence. That’s the shocker. Now there’s, yeah, responsibility, and no escape.”

And that’s what Rob Doyle’s writing leaves us with—“the sense, euphoric and terrifying, that everything was possible again.”