Three Stages of Amazement: A Novel 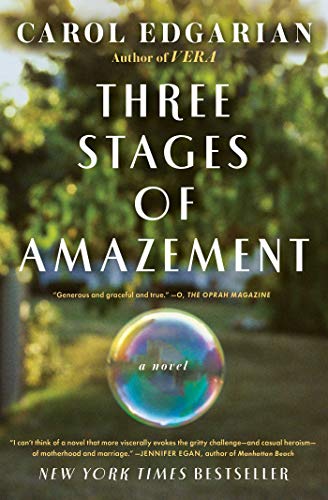 Alas, the promise of award-winning novelist, editor and publisher Carol Edgarian’s new novel, Three Stage of Amazement, is not realized, despite the success of her first fiction book, Rise the Euphrates (1994) and the enviable reputation of her seven-year-old Narrative magazine, which Esquire a couple of years ago named “the gold standard of online [literary] magazines.”

Big in its reach—love, liaisons, marriage, family, friendship, professional ambition, high-finance, children, parents, technology, contemporary music, the new Obama administration, the falling economy—and with a large and diverse cast of characters (like Jonathan Franzen, Edgarian augments the major players with many minor characters), Three Stages of Amazement proves, for all its intelligence and sensitive observation, less than compelling and at times strained.

Still, readers can tell they’re in the hands of an accomplished writer, though one who has perhaps chosen too wide a stage for her domestic drama. The story turns predictable too soon, and central characters (inexplicably) keep yielding ground to secondary ones, with the result that the primary ones never really engage or develop. This loss is particularly felt in the heroine-protagonist Lena (Helena Rose Rusch) Pepper. Edgarian’s often mannered style also tends to be distancing.

And then there’s the matter of the book’s title. “Amazement”—bewilderment and confusion—are not at the heart of Lena’s trials, nor is it clear what the rest of the title—“Three Stages”—refers to. In fact, the opening line of the book offers a different count: “The modern marriage has two states, plateau and precipice. . . . ” Oh? For sure, Lena has challenges. When the story opens, in 2008, it’s not too long after she has lost one of her twins at birth, The other, a premie, requires incessant and enervating care. It’s tough work but Lena is doing it, even though her loving, nice-guy husband Charlie Pepper, a surgeon on the brink of marketing a surgical robotic device, is often cross country on medical business.

Lena is adored by her young son Theo, and she is not without friends, a drop-in (albeit trying) mother and sister, or even a career, though it’s not the fast-track one she was on back East, before the family moved to San Francisco, giving up a more comfortable life. While she continues to nurse a hatred for her uncle Cal Rusch, a fabulously wealthy Silicon Valley magnate (of course, they will come to an understanding), and she still thinks about her dazzling former Italian lover of years ago (of course he will reappear), she manages to keep it all together (she does have hired help).

Lena is smart, attractive, aware, ironic, politically liberal, and culturally hip. The problem is, she does not clearly emerge from the contradictions and frustrations that define her. The modulations of Edgarian’s style make it difficult to fix feelings and views. Of Lena: “She was a romantic and, worse, an optimist.” Why worse? From whose perspective is this assessment offered? “Fate had forced her to be practical and stolid, too. These two sides rubbed. She was crazy for her children, her friends, chocolate, and news of any kind. She might be crazy for Charlie, too, if she came across him in the daylight once in a while.” C’mon, what does this mean, especially because elsewhere Lena says she adores him? “In other words, Lena Rusch was extraordinarily ordinary.” But this is not so, as the author shows Lena to have a caustic, critical intelligence and an ability to act on it, even with volatility.

At times omniscient author, Edgarian, for the most part, goes interior and switches point of view from character to character, complicating impressions with so-called gnomic expressions. For example, Lena’s wealthy socialite aunt-in-law Ivy muses at one point, “The wide shoulder was trying to make a come back, as it always did when women and the markets were downcast.” Oh? But even if so, what does this generalization contribute to character development or to the domestic or familial theme? Much better are Edgarian’s omniscient-author observations, such as: “Ivy passed through the room in her celestial gold Valentino (from his final collection); her diamonds and pearls atop her small chest like a prow cutting the sea.” Stylistic hesitations and repetitions abound: “But he was hard on himself, Charlie was.” “She had weathered an uneasy life, Beverly.” “But this middle one, this Lena—What to do about her?” ”Crashing to sleep, she thought, Isn’t the heart, isn’t the heart a curious thing?”

There’s also more than a smattering of odd imagery: “The blue irrational sea,” “With hope rising like a cockamamie kite.” Yes, there are admirable sections of Three Stages of Amazement, where good writing, informed by a mastery of complex subject matter—medical technology and corporate America—reflects an author of wide-ranging knowledge.

The irony, however—because it was probably not intentional—is that as a contemporary narrative, Three Stages of Amazement is at its most effective when it comes close to being cultural criticism in the form of high-class soap or satiric chick lit with a smart chick holding center stage.

A recovering academic, Joan Baum has for decades reviewed books across numerous genres in newspapers, magazines, and radio. In addition to New York Journal of Books, current reviewing includes NPR.