Three O'Clock in the Morning: A Novel 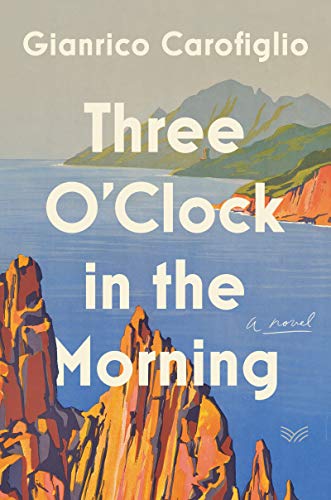 “Gianrico Carofiglio’s Three O’Clock in the Morning is profound in its simple delivery.”

A compelling, compact story whose focus transpires in forty-eight hours, Gianrico Carofiglio’s Three O’ Clock in the Morning explores a father and son relationship as the pair explore the coastal town of Marseilles. Seventeen-year-old Antonio is the only son of divorced, Italian parents. In high school and living with his mother, his rapport with his 51-year-old father is distant and strained until fate inexplicably intervenes in a manner that throws father and son together.

There’s no arguing with a specialist’s orders, unconventional as they may be, and when Antonio’s episodic dizzy spells come one too many, father and son travel from Italy to Marseilles for an expert opinion, and heed the instructions of one Dr. Gastaut, who suggests an unorthodox remedy. A “privation test,” in which Antonia stays awake for two consecutive nights might be the key, and father and son accept the last-ditch effort as the means to Antonio’s final diagnosis. It’s a question of stressing Antonio’s unpredictable epileptic symptoms, in the interest of determining if they’re idiopathic. What the estranged mathematician father and diffident son have in common is unknown, until their enforced companionship positions them to find out.

Their relationship is a work in progress. When Antonio’s father declares he’ll stay awake for the duration as an act of solidarity, the wheels of change begin. In devising an agenda centered on whiling away 48 hours, they check into an unremarkable hotel, and take to Marseilles’ streets with no objective beyond keeping awake. Antonio remarks, “Out on the street, we looked each other in the eyes, and I had the feeling that this was the first time we’d ever done that.” He ponders the awkward silence, in play for years now, between himself and his unreadable father, “If anyone had asked him about his relationship with his only child, my father would certainly have spoken of a silent hostility that had grown with time, that he couldn’t understand and toward which he didn’t know how to behave.”

Because Antonio has long assumed a remote stance toward his mathematics professor father, whom he thinks was the catalyst of his parents’ divorce, his world shifts when his father confesses the divorce left him with a broken heart. “I’d always taken it for granted that it had been my father, but now many beliefs on which I’d based my own sense of identity—who I was, why I was the way I was, and whose fault it was—were losing their solidity, becoming elusive, suggesting other things.” Antonio is caught off guard by his father’s ready candor as they discover a new dynamic. “He seemed pleased to be able to tell me anecdotes and explain things. Above all, he seemed pleased by the fact that I was letting him. It hadn’t happened since I was a child.”

Gianrico Carofiglio’s precise, economic language is insightful to the point that this poignant story’s setting is secondary, save for the unfamiliar sense that dodgy parts of Marseilles are not intended for tourists, and therefore, father and son have the impression they’re up against the secrets of this French, coastal town together.

In restaurants, a trip to the beach, and by invitation to a local’s party, Antonio’s carapace of resentment is incrementally cracked, and a bridge to intimacy becomes possible. In a seedy, after hours jazz club, where Antonio discovers his father’s hidden talent, he witnesses the artistic side of his cerebral father and sees him in new light. Hour by hour, father and son come to know each other. They compare notes on coming of age, mathematics, and finding one’s place in the world. When the two discuss the finer points of literature, the conversation turns to the writing of F. Scott Fitzgerald. Antonio’s father remarks, “There’s a sentence of his I often think about: ‘In a real dark night of the soul it is always three o’clock in the morning.’”

Antonio would like the weekend to go on forever. Toward the end, he says to his father, “There isn’t anything that’s not been strange in the last two days.” “You’re right,” his father says. “We’ll have a few stories to tell.” Antonio reflects upon the weekend and comes to the realization: “I didn’t want it to be over, I wanted to stay suspended at the point where I was, on the borderline, the exact point between before and after.”

Gianrico Carofiglio’s Three O’Clock in the Morning is profound in its simple delivery. In 48 hours, a father and son come to know each other by talking and really listening.