The Three Mothers: How the Mothers of Martin Luther King, Jr., Malcolm X, and James Baldwin Shaped a Nation 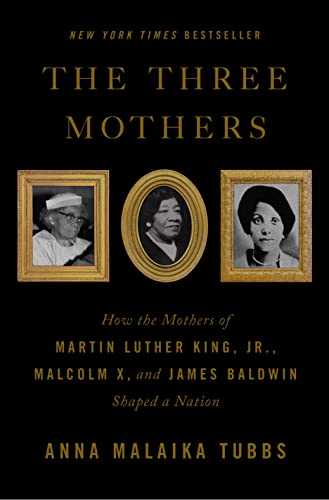 “The Three Mothers is a tribute to and celebration of Black motherhood from the late 1800s to the present.”

The Three Mothers is a tribute to and celebration of Black motherhood from the late 1800s to the present. It focuses on the unheralded, historically ignored women who, against all odds, raised three Black men who forever changed the course of our nation: James Baldwin’s mother, Berdis Baldwin; Malcolm X’s mother, Louise Little; and Martin Luther King, Jr.’s mother, Alberta King.

This book will enlighten those interested in Black History, women’s history, and how the United States came to be the country it is today for worse and better. The book’s author, Anna Malaika Tubbs, a Cambridge Ph.D. candidate in Sociology and a Bill and Melinda Gates Cambridge Scholar, has written a meticulously researched scholarly work on a subject that is near and dear to her heart as a new Black mother herself.

She writes that “Louise, Berdis and Alberta were well aware of the dangers they and their children would be met with as Black people in the United Sates, and they all strove to equip their children not only to face the world but to change it.” And make indelible changes, their sons did, though sadly, each was outlived by their mother.

Tubbs delves into as much background as she can find on Berdis, Alberta, and Louise, reaching back into history to tell their stories and show how they came to be as strong and influential as they were. She paints a bleak but realistic picture, pieced together from many sources, of how Blacks, especially Black women, were dehumanized throughout our nation’s history. This historic background serves to make the three of them shine more brightly, highlighting their courage, strength of character, resilience, and vision of a more humane society, and how they passionately fought against dehumanization and taught resistance to their sons.

Smart and resilient, Louise Little (née Langdon) was born in Grenada in 1897 into a tight-knit extended family and was so light-skinned that she could have passed for white. She grew up hearing stories of resistance to her island’s colonization that would later inspire her to fight against oppression and for a more just world. She eventually married Earl Little who, like Louise, was a follower of Marcus Garvey, and they had a son named Malcom in 1925. They moved around a good deal because everywhere they went—Nebraska, Wisconsin, Indiana, and Michigan—they encountered racism and did not want their seven children to grow up in such an environment.

Louise ran a strict household with high expectations about education and adherence to religious beliefs. Her children admired her fortitude and determination to take care of them, especially after Earl died in a streetcar accident and she continued to provide for the family until she became so depressed that she was institutionalized in a psychiatric hospital.

Alberta King (née Williams) was born in 1903 “into a family of love, faith, vision, and means” with “access to resources, education, and the support of a budding [Baptist] congregation” that strongly believed in fighting for human rights and against racism and Jim Crow laws. Because of the people who surrounded her growing up, Alberta saw uplifting others “as a crucial part of her role as a Black woman.” Considered brilliant, she became a teacher and in 1926 married Michael King.

The King children were raised with love and to respect rules. Alberta shied away from the spotlight and, instead, focused on raising her children. Motherhood brought her great joy—in 1957 she was named Atlanta’s Mother of the Year—and she was filled with pride when her son, Martin, was named as Time magazine’s Man of the Year and received the Nobel Peace Prize. However, she also suffered because of him, fearing for his life due to ongoing assassination threats.

Berdis Baldwin (née Jones) was born in Maryland in 1903 on Deal Island which had a rich history of free Blacks known as “Black Jacks.” She was a poet and writer, gentle, selfless, and open-minded. In New York City, struggling financially as a Black, single mother of a two-year-old, she met David Baldwin and married him. She was family oriented and a fierce protector of her son in spite of a marriage that continued to unravel until she had her husband committed to a psychiatric hospital.

“As hard as Berdis tried, she could not shield her son from the harsh realities of poverty and discrimination.” She and her James, who had his mother’s talent and drive, managed to rise above these realities by reading and writing. No matter where he lived in the world, he remained close with his mother. Like Alberta King, however, Berdis was proud of her son but worried about him living in a racist world.

Tubbs writes about these differences but also about how these three Black mothers were dehumanized by white and male culture. In spite of this, along with countless other Black mothers, they “allowed their children to thrive even when all odds were stacked against them.” All three of their sons “carried their mothers with them in everything they did.”

Tubbs, herself, describes how she feels erased in this society as a Black mother. She bolsters personal examples with statistics showing how poorly Black women are treated due to structural racism, including how many have, like the three Black mothers described in this book, lost their sons due to it. The last chapter of the book is a scathing analysis of what white and male culture have done to Black women, a portrait of courage in the face of it, and a call to arms to continue to fight for a shared vision of humanity.

This book would have been an easier read if there were separate sections for each mother and son that was solely about them. Instead Tubbs chronicles their lives—early days, later days, etc.—which may make it difficult for readers to piece together their individual stories and delineate what happened to whom. By weaving their stories together as she does, she gives us a historical view of their lives but sacrifices each of their unique stories standing out in relief against the other two.