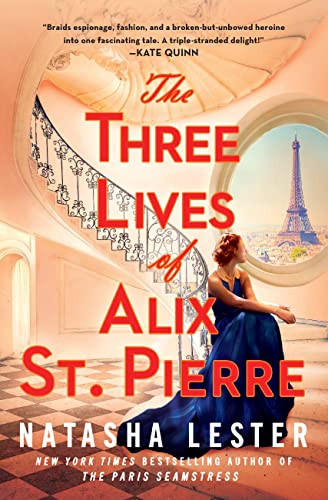 Natasha Lester has written a rich tapestry of a book, weaving the spy efforts of Alix St. Pierre with her post-war career as a publicist for a daring new fashion designer, Christian Dior. The war against the Nazis may be over, but Alix still wrestles with her guilt over a mission gone very wrong, one where her own fiance is killed.

The narrative toggles back and forth between the last years of the war, when Alix passes on information from a Nazi contact that turns out to be a trap, to after the war, as Alix tracks down the informant before he finds her, all against the background of Paris high fashion:

“The past wasn’t series of events that had once happened, it was the substance of Alix’s bones. Finding the Nazi who had made her the murderess of nine men was the right thing to do—the only thing to do. Because—Live. That was the message she’d seen in Dior’s gowns. How she truly wanted to live once more.”

The descriptions of the birth of Dior’s fashion house are vivid, putting the reader right in the middle of both the chaos and the excitement, the hard work and the triumph. It would seem a strange, almost frivolous, backdrop to a war story, but Lester knows how to make the fashion work. In her skilled hands, dressing well, feeling right in one’s skin, matters all the more after the horrors of war.

Lester has also done a good job of researching the OSS, the Office of Strategic Services, the spy agency that sent women into Europe during the war, both to sow disinformation about the Allies and their plans and to pass on enemy efforts and capabilities. Women, after all, weren’t seen as a threat, and could go places without suspicion. Allen Dulles, Alix’s contact in the OSS, was known for helping the partisans in northern Italy, but was also famous for protecting Nazis from prosecution at the Nuremburg trials. Both of these roles realistically intersect in Alix’s tragic mission.

The plot is one of complicated twists and turns, taut with dramatic tension, but there’s more to the story than an exciting narrative with romantic elements. Lester has created a deep character in Alix, one with strengths and weaknesses who the reader is eager to follow back and forth through time. It’s fitting that through all she endures, it’s fashion that helps heal Alix. She takes what she learns from Dior and applies it to her own life:

“‘The ledger will never be settled,’ she said. ‘But I need to finish this, for me. So that the ledger is something I can endure instead of something that defines me. We know what we are, but know not what we may be.’ She quoted Dior, and Shakespeare, to Dearborn. ‘I want to be the best possible person I can be, rather than the worst.’”

The ending is both open-ended and satisfying, answering some questions, while leaving others unresolved. The ledger, as Alix says, doesn’t get wiped clean, but the story remains, and that’s what matters.